G&M Meat Market is a small portable building tucked away on Domingue, a residential street one block off Jeanerette’s main highway. A small lot, with space for only about three cars, stays parked up most of the time. Customers come and go throughout the day, buying hot links of boudin for breakfast, or picking up a loaf of bread (supplied by the local bakery, LeJeune’s) to make a boudin sandwich for lunch.

George Stevens, the proprietor, is a school bus driver by day. And he’s a boudin maker by night…and day. When Stevens first began driving buses for the Iberia Parochial School System, he’d transport students from Jeanerette to New Iberia in the morning, and go to work at a local meat market during school hours. He’d make boudin while the students were in class, and at the end of the school day they’d all drive back to Jeanerette together.

Today, Stevens happily works as his own boss at the meat market, but he still drives school buses on the side. His days start early with the morning bus route, taking children to school. He spends late mornings and mid-afternoon at the market, making boudin and helping customers, and then re-boards his bus to drive students home after school. His cousin works as a clerk to serve customers while he is away, but all the butchering is his responsibility. It’s not uncommon to see him through the building’s windows working late into the night (or sometimes even into the morning), preparing hundreds of pounds of boudin during the holiday season. The schedule is a busy one—his only real day off is Sunday—but one thing’s a blessing: he’s thankful for a short commute. Though he drives countless miles with his bus each day, his house is only a few doors down from the meat market. He can walk home in just a few short minutes after a late night’s work. 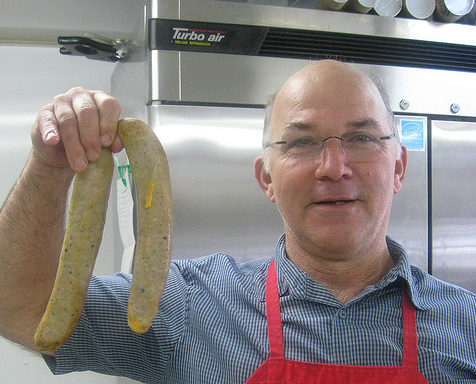 I think I’m going to be here until I just can't go no more. I’ll retire from the school system. But this is me; this is – oh God I love it. I really do. ~ George Stevens

Kevin Downs was practically predestined to enter the meat business. He grew up in a hunting family in Sulphur, eating…

Never in his first fifty years of life did Dickie Breaux, né John Richard Breaux, imagine that he would be tied to…