Born to a barber and a beautician in 1942, Corky Richards did not grow up in the seafood industry. But he got in it as soon as he could. Corky’s family moved to Apalachicola when he was a teenager. He immediately got to work on the bay. Using his carpentry skills, he began to make his own oyster tongs. One year in the off-season, a local marine supply company asked him to make tongs for the store. Soon Corky was making and selling tongs to oystermen throughout Franklin County. Business was so good Corky opened a woodworking shop. Originally, he worked in a building on Water Street in downtown Apalachicola. There Corky fashioned pine and steel into custom pieces. Today Corky and his son Rodney work together in a workshop on the edge of town. Now, though, they spend more time making cabinets than tongs. But Rodney still makes and repairs tongs for some of his father’s longtime customers. They are the only ones in town still making them by hand. And they may not be doing it much longer. Corky says that when he retires, Rodney will probably retire too. And the days of handcrafted oyster tongs will retire with them.

It is with great sadness that the SFA shares news that Corky Richards passed away in July of 2008. 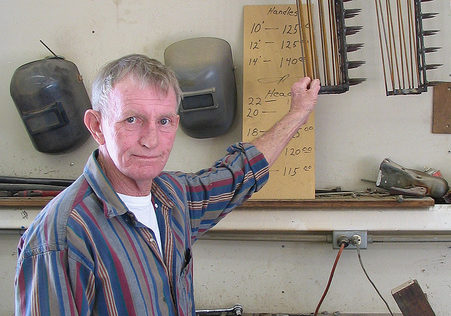 "There were different tong makers in town [when I started]. But I was the only one making tongs that had oystered before and knew how I wanted mine to be. And I just started to do it like I liked them. But everybody else liked them, too." - Albert "Corky" Richards