2008 Ruth Fertel Keepers of the Flame: Cheri and Earl Cruze

Since Cheri and Earl Cruze began producing churned buttermilk in the early 1990s, their small family farm in Knox County, Tennessee, has become a revered name among culinary connoisseurs and country folk alike. Earl claims he is simply carrying on “a family tradition.” Both his grandfather and great-grandfather sold buttermilk from horse-drawn milk wagons. The Cruzes are one of the only family farms in the state of Tennessee to process and bottle their own milk. In addition to buttermilk, Cheri and Earl sell whole milk.

See SFA’s interview with Cheri and Earl Cruze and watch SFA’s film on them using the links that follow.

Excerpts from an interview with Cheri and Earl Cruze

Earl Cruze: My date of birth is December 4, 1942. I guess that makes me about 65 years old. I grew up on the French Broad River a few miles down in the community of Asbury where the forks of the river – they call it the forks of the river–where the Tennessee River begins. I grew up on a small dairy farm with my Dad. We farmed the land on the French Broad. In east Tennessee I feel like you’re forced to be on a river bottom rather than on a hill—to try to grow corn especially. But, anyway, it took me until I was 60 years old to own my own river bottom. I feel like life’s just beginning now. I guess I feel a lot more optimistic and younger than I am because I’m able to do something finally that I’ve always wanted to do. How lucky can you be, I guess? I don’t wake up any day wanting to do something else. I just want to do better at what I’m doing. There’s always room for improvement and plenty of work to be done on a dairy farm as far as that goes. But even if you have a bad year on your crop all you do is say, “I hope next year is better.” This year looks real good at this point. I hope we continue to get a few showers of rain and no high-speed wind [laughs] which will take the corn down. Good corn will make you feel real fortunate. It’s good feed without buying–especially this year as the price increases on corn.

Cheri Cruze: Right. We are a team and a lot of people kind of–I think they’re amused and try to understand our relationship because it is a team. [Earl] and I–we don’t duplicate trades. His skills and my basic skills are very, very different, but as a team we get a lot done that neither one of us could ever do on our own. We both are real optimists and we are real encouraging, so if one of us thinks of something the other one will automatically reinforce: “Yeah, that’s a great idea.” The next thing you know, we’re doing it. Because we both signed onto it we both have to do it. Nobody gets to sit back and say “I told you” so because we’re both into it up to our necks. That’s probably why we’ve ended up where we are. Most farmers don’t process their milk. Most farmers never get to that point. I was naïve enough that when Earl said, “I’d love to process my own milk. I’ve always wanted to. I grew up around dairies and processing plants and I’ve always wanted to do that,” I said, “Why not?” “What’s stopping you?” He said, “Well, the dairy inspectors say you can’t make any money at it.” I said, “Tell them you don’t want to make any money. Tell them it’s a hobby. Tell them it’s golf for you.” Of course, I said that just being encouraging. I didn’t realize what I was getting into, but it worked. And so, he put one foot in front of the other and the next thing you know we built a dairy plant. This was the first year we were married. We built a dairy plant and were processing milk before I really realized how many months a cow gives milk. [Laughs] I was like you, Georgeanna. I was still asking all those silly questions. That works really good too. A lot of couples have the problem that one has a passion or dream and the other person thinks it’s crazy and neither one ever gets to do what they want to do. Earl and I both kind of go with the flow. We’ve encouraged each other [pause] out of ignorance or whatever, but it works.

EC: Every bit of it is gratifying to me. Of course, I think if you ask me what makes me feel the best, it’s making good buttermilk. Basically, we call ourselves the “Buttermilk Makers” because that’s what people like most that we do, really. We hope to increase production back to homemade ice-cream as we did at one time and maybe add low-fat milk or light milk. Light milk? Is that what you call it? Anyhow, we’re trying to move ahead one day at a time and want to encourage everyone else to live the good life.

CC: We got into buttermilk [pause] kind of in a funny way. We processed whole milk. And, of course, I like whole milk. I drink whole milk. But, people kept asking me in my store, they’d say, “Why don’t you make buttermilk?” And, I’d say, “Well, we just don’t. Do you want buttermilk?” [People would say,] “Yes, I’d love to have churned buttermilk.” So, finally after a few people kept nagging me for buttermilk, I said, “Put your money where your mouth is and sign this piece of paper. Give me your address, your phone number. And, when I make buttermilk, if I make buttermilk, I’ll call you and you’ll be my customer.” Once we had a hundred names of people willing to say, “I’ll be your customer,” I told Earl, “I think we have a demand here that needs to be met. These are people who want real churned buttermilk.” So, we tried it and we’ve been making buttermilk ever since. And really the demand is greater than we’ve ever been able to supply. People will drive–when they know about our buttermilk–will drive from out of state. They’ll drive for miles with coolers and stock up. People give it as birthday presents to people who turn 90 years old and have everything they’ve ever wanted but want to remember their childhood or their young years. Buttermilk is a memory food and it really makes people happy to drink a glass of buttermilk. It reminds them of when they were younger or of someone who made buttermilk or of somebody that has passed on. It’s a great–it’s a great gift in a way besides being a great food. 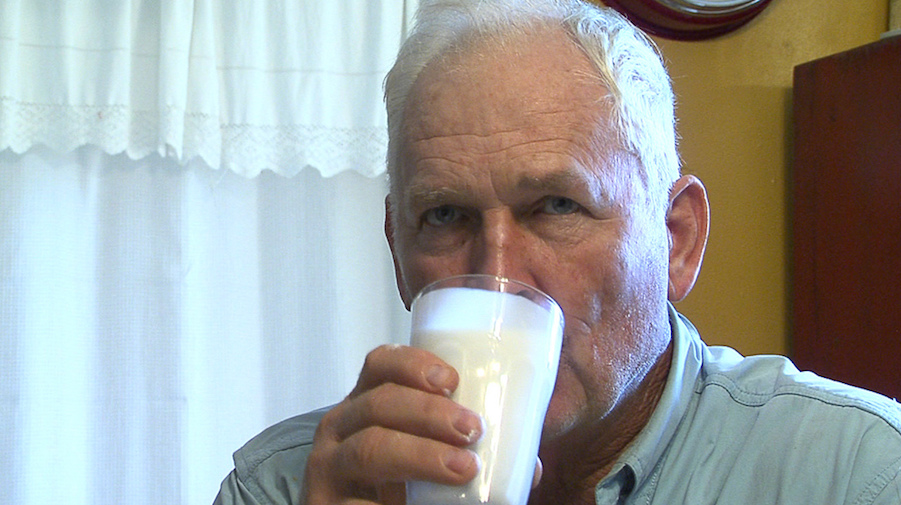