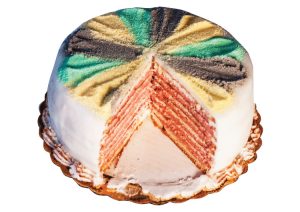 Each January, as Americans lean into the well-trodden “new year, new me” mantra, New Orleanians have a mere five days before they face down the bacchanal of Carnival. Beginning on January 6— Twelfth Night—a parade rolls down St. Charles Avenue, parties rock the city, and king cakes flood the market in a purple, green, and gold blur.

Like Mardi Gras, king cake bespeaks deep Catholic roots that have been embraced and appropriated as a city tradition, not merely a religious one. The market is wide open on king cakes—pretty much every bakery and grocery store has its own version—so quality, price, and flavors vary widely. At the very least, you can expect a  sweet bread twisted into an oval shape, filled with cream cheese, fruit compote, or classic cinnamon, gently iced, and heavily sprinkled in purple, green, and gold. King cakes also come  with a tiny plastic baby—but you already know that. Dutiful celebrants will make sure every office party and social gathering has at least one king cake.

The Lenten season that follows Mardi Gras reminds you of what comes after celebration: thanks, reflection—and for some, self-discipline. The citywide celebration shows the power of a communal experience, one in which everyone is a king for a day. A birthday celebration, crowned with a cake, is the recognition for making it through one more year. New Orleans birthdays are often graced by a particular local dessert: the doberge cake. It honors the personal experience rather than the public experience that king cake does.

I remember my first doberge. When I was ten or twelve, my dad brought home a huge box for my mom’s birthday. Inside was a cake: round, tall, and covered in a shiny and seamless dark brown icing decorated with big white roses. It looked nothing like the grocery-store sheet cakes that dominated the birthday-party circuit. My mom cut and lifted out a perfect, triangular slice: six layers of cake and five more of a dark chocolate filling.

I was in awe when they explained that this doberge cake had come from a New Orleans bakery called Gambino’s, which sounded fantastically cosmopolitan for a girl growing up in south Mississippi with a pet pig and more trees than neighbors. Mom told us how my grandparents began the family doberge tradition, bringing home a cake each time they passed through New Orleans or Baton Rouge (which has its own Gambino’s).

Sam Scelfo Jr. tells me that Gambino’s recipe and method for doberge has never changed. He says that Beulah Levy Ledner created the original recipe in Depression- era New Orleans. She sold it to Joe Gambino in the 1940s. Gambino did not alter the recipe, and neither did Scelfo, who bought the bakery in 1978. Doberge traditionally comes in two flavors: chocolate and lemon. For the indecisive consumer or taste-divided families, Gambino’s offers a conjoined doberge that is half chocolate and half lemon. These are the two flavors that Ledner created, and Gambino’s honors the tradition. 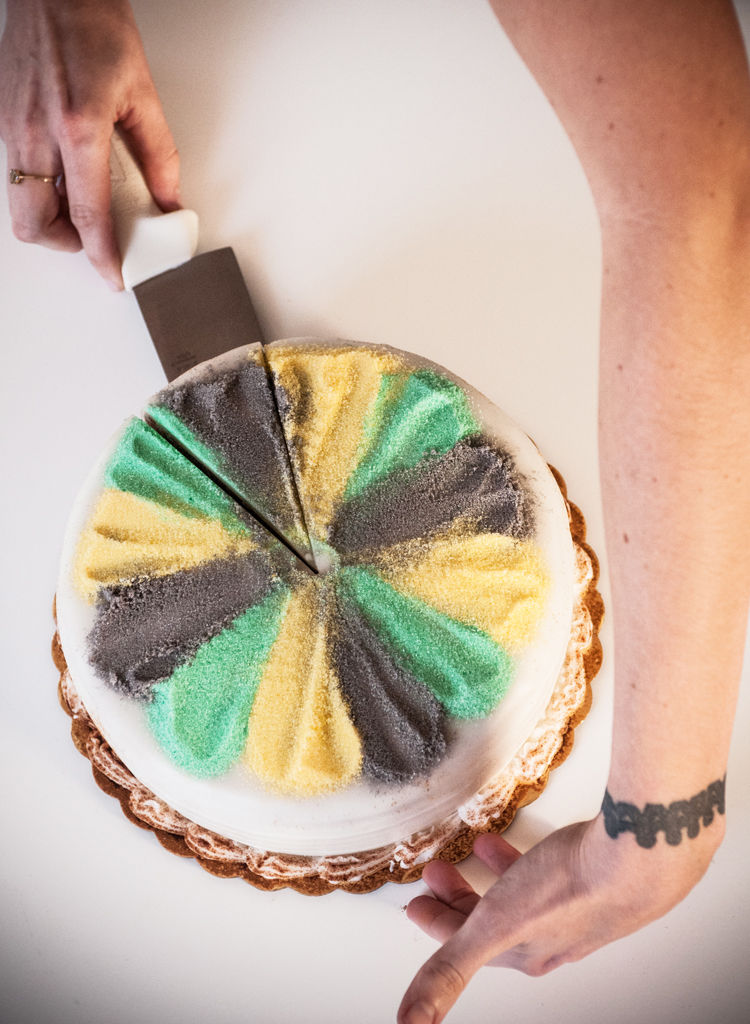 Doberge is based on the Dobos torte, a nineteenth-century Hungarian confection first served to Emperor Franz Joseph I of Austria-Hungary. Ledner lightened the recipe; instead of the buttercream that fills a Dobos torte, she layered the cake with custard. Doberge is the product of many cultures. Created by a Jewish baker, inspired by a Hungarian cake, and adopted by an Italian bakery, it was ascribed a French-sounding name to make it more palatable in a Francophile city. Yet doberge feels like none of these things. The cake is so tied to New Orleans that it’s hard to taste the cultural amalgam from which it sprang.

King cake is much more visible as the New Orleans confection. The product of a centuries-old baking tradition, king cake’s history is more lore than concrete fact. It’s generally traced back to medieval Europe, when the Catholic state ruled France and Spain. The cake’s royal designation stems from its celebration of Twelfth Night, when, according to the New Testament, three kings arrived in Bethlehem bearing gifts for the baby Jesus. The king cake blueprint— an oblong brioche dusted with sugar—came to New Orleans and, as most things decadent in the city, has blown up over time.

King cakes are omnipresent from January 6 to Mardi Gras, sometimes impolitely showing up at the end of December. This year, Haydel’s Bakery, frequently cited as one of the best bakeries for a king cake in New Orleans, teamed with Uber to deliver orders on Twelfth Night. Smoothie King offered a king cake–flavored smoothie that tasted like cough syrup without the buzz. I’ll cop to enjoying the king cake–flavored vodka mixed with a cream soda, but at some point, all of this king cake stuff can feel like a sugary circus. Like catching beads at a parade, after the fifth or sixth time, do you even want it anymore? Is it still just as special as it was on Twelfth Night? It feels unfair to hold king cake to such a high standard. High demand, simple structure, and ability to be shipped nationwide (FedEx even has a specially sized king cake box) have turned it into the Bourbon Street of New Orleans desserts.

If king cake is like hitting up Bourbon while in town, doberge is akin to scoring an invite to a chef’s private dinner party.

If king cake is like hitting up Bourbon while in town, doberge is akin to scoring an invite to a chef’s private dinner party. Doberge is beyond the purview of most home cooks. Your Louisiana grandmother might have passed down her recipe for gumbo; it’s unlikely she ever made a doberge. Most home bakers aren’t up to the task of baking multiple cakes, cooking the custard filling, assembling the layers, and then icing the beast. So they leave it to local bakeries, making doberge cake that much more special.

My maternal grandparents grew up eating Gambino’s, and because of this, we are a Gambino’s family. There’s no reason to consider switching it up. Every bite of Gambino’s doberge tastes the same and offers the same feeling.  With each bite, memories of eating it float to the surface.

There’s a reason why a forty-day period of fasting feels welcome after the weeks-long revelry of Mardi Gras. Such a yearly celebration is perfect. Doberge is a special instrument of memory, a welcome herald of times past, present, and future. Though Gambino’s has kept a lock on Ledner’s original recipe for almost a century, other bakeries in town successfully bake and sell their own renditions of the doberge cake.

Debbie Does Doberge (no, it’s not a Dallas-based company) experiments wildly with flavors outside of the lemon-chocolate binary—goat cheese, peanut butter and jelly, Key lime—and their irreverent name hints at a willingness to flout tradition. They offer a king cake doberge year-round: white cake with cinnamon, cream cheese icing, and your choice of fruit filling.

It’s easy to diagnose this Frankencake as a crime, one that tarnishes the integrity of both the doberge and the king cake. Breaking the unwritten laws of tradition by experimenting with flavors and casting a blind eye to season may feel like an affront to the plastic baby Jesus. But I’m going to roll with it.

Emma Sloan is a freelance writer based in New Orleans. Her writing has appeared in Vice Munchies. Photos by Pableaux Johnson.

“Put some cream in it and you’ll probably have a King Cake flavor.”

“It was a bunch of us back here playing mad scientists.”

Hear Donna and Claude Black on their Mardi Gras sno-ball 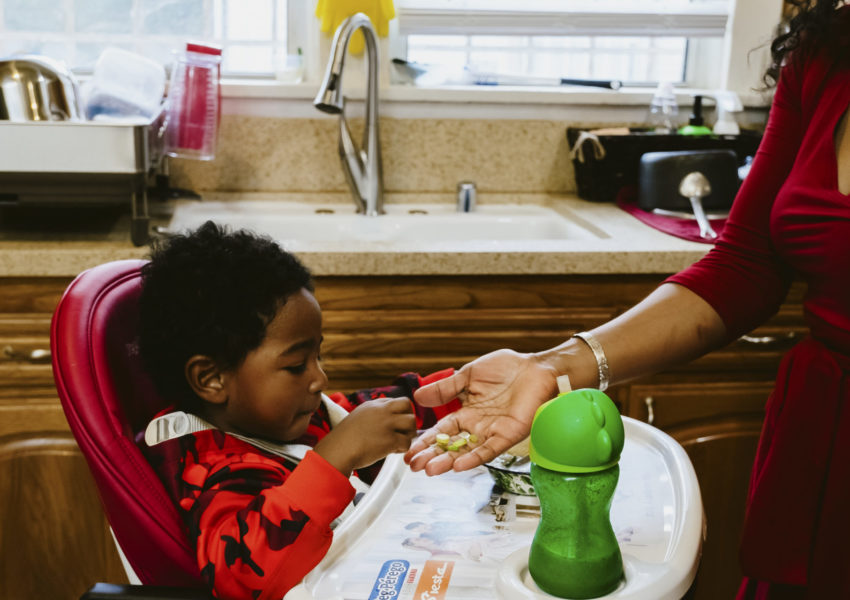 From rice soup to gumbo broth, a son of two cultures learns from his parents’ palates.