Green, I Love You, Greens The color of memory

by Jessica B. Harris (Gravy, Spring 2016)
Illustrations by Matt Ferebee 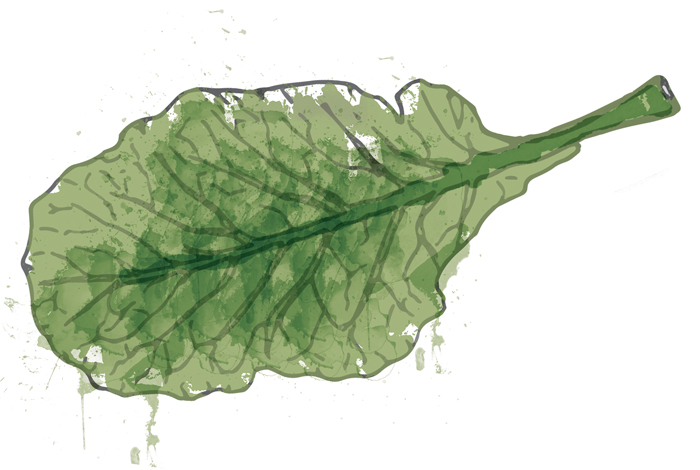 So wrote the Spanish poet Federico García Lorca, evoking all of the pastoral beauty of the color that is connected with country gardens and ripening fields.1 It’s connected with virility and with youth. French King Henry IV was called Le vert galant—The Evergreen Gallant, or The Gay Old Spark. The Spanish call a dirty old man un viejo verde. In China, green is considered yang and is associated with female virtues. Green was the color of protection in ancient Egypt, and the god Osiris, known as the Great Green, was often depicted with green skin in paintings and statues. Green is the color of the prophet Muhammad and is venerated in Islam, where Paradise is supposed to be full of lush vegetation (as is only natural for a religion that began in the desert!). While green can symbolize sickness and envy, it more often means hope and growth, as it is the color that symbolizes nature in all of its possibilities. Iemanja, the water mother of the Yoruba people of southwestern Nigeria, takes blue-green viridian as her color, symbolizing life itself.

For artists, green is composed of blue and yellow, and is the strongest of the secondary colors. Impressionists embraced the color in the late nineteenth century, when the innovation of pigments in tubes allowed for painting en plein air. Farmers know the exact shades of green that signal all is well: the celadon of a ripening lettuce or the malachite of a citrus leaf, the lush, deep hues of growing. It is the green of an increasing number of chefs and restaurateurs who grow and cook, who have reacquainted us with the tastes of true freshness and with old savors rescued from oblivion.

For me, green is also the color of memory, because as an African American Northern Southerner, green is about greens. We eat them for New Year’s Day for folding money—unless we’re in New Orleans, where we smother cabbage. Jazz great Thelonious Monk, a native of North Carolina, wore a collard leaf as a boutonniere.

“Leontyne” is the great African American soprano Leontyne Price from Laurel, Mississippi, and the poet is riffing on the seeming contradictions between the lieder, a genre of German Romantic music, and the decidedly funky scent of the cooking greens.

My paternal grandmother was an urban farmer before her time. She was also a forager, known to cull the dandelion greens from the lawns of Fisk University when she visited Nashville from her Napier, Tennessee, home. By the time I knew her, she lived in the South Jamaica projects of Queens, New York, and grew her Southern staples (peanuts, okra, mustards, turnips, and collards) in the small allotment that was available in those days. She wasn’t a particularly good cook, but at greens and beaten biscuits she was a wizard. A mixture of collards and mustards, her greens forever marked me. When I went away to school, she’d wrap them in funky care packages that filled me with delight.

I began my career as a culinary historian back in the dark ages of the 1980s, and I remember proclaiming that collards were African. At some point, I said as much on a television show. Soon after, I was blindsided by a phone call from the culinary historian Karen Hess. Karen and I were friends, and I knew she took delight in finding errors of scholarship. I did my best to avoid her wrath. When I picked up the phone, she rather gently asked, “You do know that collard greens are not African?” I didn’t, but I damned sure checked further and got myself straightened out after that.

Greens are a perfect example of that culinary cross-fertilization that created the cuisine of the South.

Collards, although claimed by African Americans with a vengeance, are European. “Collard” is a corruption of “colewort,” and colewort is any non-heading cabbage. The Africanism in the pot, if you will, is the consumption of the potlikker in which they were cooked. Greens, then, are the exception to what seems to be the Southern culinary rule: The misattribution favors the African American hand in the cooking pot. Confusion persists. Greens are firmly planted in the African American experience. They are a perfect example of the culinary cross-fertilization that created the cuisine of the South.

Northern European greens are simply a New-World substitution for an Old-World food. The Old World here is Africa. European collards replaced a myriad of leafy greens that go by so many different names as to be bewildering to all but the most intrepid botanist. In the New World context, we get spinach, mustards, turnips, and the ubiquitous kale, as well as the less-used dandelion, purslane, creasy, poke, and more.

A culinary curve bending from Africa through South America and the Caribbean to the United States traces the migration of leafy green stews from Old World to New. It begins on the African continent with the greens-inflected meat and fish stews like Nigeria’s eyo, Benin’s sauce feuilles, and Senegal’s soupikania. Across the Atlantic in Brazil, the leafy greens turn up in efo, a dish that maintains its Nigerian name as well as the Nigerian use of palm oil. Move up that curve and you’ll next find the callaloo of the Caribbean, a soup that depends on leafy greens as its main ingredient, along with the bounty of the local waters.

Finally, you arrive at New Orleans gumbo. Leah Chase’s Holy Week gumbo z’herbes, at its origin, celebrated the tradition of foraging. It traditionally uses nine, eleven, or thirteen varieties of greens, indicating the number of new friends to be made in the year. Recently at Patois, also in New Orleans, I had a turkey andouille gumbo that was remarkable for its addition of small strips of collard greens to the soup, a fillip that may have been born of kitchen necessity, but one that brings us full circle, to my grandmother’s greens.

We return not to her small, cramped kitchen in Queens, but to white-tablecloth restaurants, where trends celebrate this multicultural dish and return us to the past. The matrix vegetable may be European in origin, and the African hand is still tasted in the seasoning of the pot. The chef might even add foraged greens or a spice that indicates the increasingly complex tangle of cultures that is now the South. Expertly handled, the final result resonates with the toothsome flavors of fresh vegetables, celebrates the multiple heritages that have gone into the preparation, and simultaneously offers a taste of memory and a taste of the New South. It’s all there in a leaf of collard, green.

Jessica B. Harris is a founding member of the Southern Foodways Alliance. After speaking at the first SFA Symposium, she encouraged John T. Edge to date Blair Hobbs, who is now his wife. She delivered a version of this talk at the 2016 Blackberry Farm Taste of the South.

1. There are several ways to translate this line. This is among the most straightforward.
Photo of lacy collards at the 2014 SFA Symposium by Brandall Atkinson.