Photo by Marion Post (Wolcott), 1940. Courtesy of the Library of Congress This piece comes from Gravy #46, featuring “5 under 35” in Southern food and drink. Big Bad Pastry Chef Dwayne Ingraham is making sweet waves at Oxford’s City Grocery by Vanessa Gregory I met Dwayne Ingraham over ice cream sandwiches—basil macarons on the outside, frozen balsamic custard within—served alongside a puddle of vanilla-poached strawberries. Subtly sweet and insistently seasonal, the late-summer confection proved an ideal introduction to the twenty-nine-year-old pastry chef, who pairs French techniques with the tastes and traditions of his Louisiana…

I met Dwayne Ingraham over ice cream sandwiches—basil macarons on the outside, frozen balsamic custard within—served alongside a puddle of vanilla-poached strawberries. Subtly sweet and insistently seasonal, the late-summer confection proved an ideal introduction to the twenty-nine-year-old pastry chef, who pairs French techniques with the tastes and traditions of his Louisiana birth.

John Currence hired Ingraham two years ago to reinvigorate the dessert program at City Grocery Restaurant Group in Oxford, Mississippi. What he got was a great pastry chef. What he also got was a young man with diverse tastes, born in Louisiana, schooled in Vermont; a man who loves maple syrup as much as bread pudding; a country boy whose greatest influence in the kitchen has been a Dominican woman from the Bronx.

“I showed up this kid fresh out of culinary school, and she broke me down,” Ingraham says of pastry chef Jackie Caraballo, who mentored him at two Las Vegas restaurants. “She would stand by my shoulder and just bark, “This is your job, and if this is what you love to do, you really have to do it.”

Ingraham was born into a family of good cooks in Boothville, a tiny town in the extreme southeastern reaches of Louisiana, one of those spots where the Gulf of Mexico seems poised to swallow the land. Bayous and bays suggest Cajun Country, but Ingraham’s family and neighbors felt more culturally connected to New Orleans, where they frequently traveled to shop and eat po-boys.

As a boy, he learned the Louisiana repertoire. His grandmother was locally renowned for stuffed mirlitons and stewed eggplant, cooked down with shrimp and pickle meat and served over white rice. His mother baked a mean sweet potato pie. His father was a crack red beans and rice cook. And his grandfather made a stout bread pudding with bourbon sauce.

The Ingraham family did not kowtow to gender roles in the kitchen. “Mother didn’t like to get up early in the morning, so she made us self-sufficient at a very early age,” Dwayne says. “The first thing I definitely learned to do was breakfast.” By the age of five, Ingraham was working the oven, baking sweet potato pies.

After high school, Ingraham enrolled at the University of Southern Mississippi, where he studied speech communications. “One day, I literally woke up in the middle of the night and said, ‘You know, I might as well do something I enjoy. I’m twiddling my thumbs here in college for years trying to figure out what to do. I love to bake—why don’t I go to culinary school?'” 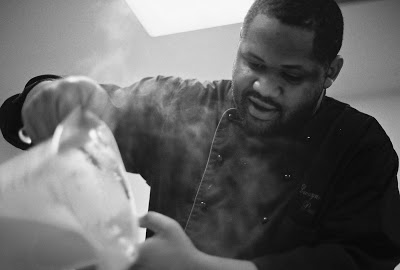 Vermont turned out to be a lot like home. People ate pies. Lots of pies. And they greeted each other by name in the grocery store. The New England Culinary Institute, in Montpelier, was a perfect educational match. Dwayne recalls, “I knew from the very first time that I rolled my croissant dough that this was for me.”

At NECI, Dwayne discovered that he is a perfectionist. And he learned that the ranks of pastry chefs are well-populated by cooks attracted to routines, methods, and measurements. “I don’t like to fail in life,” Ingraham says. “And I like to have all the tools I need to succeed.”

That approach is yielding impressive results. This winter’s jumbled-sounding chocolate roulade—with coffee cream, flambéed bananas, chocolate sauce, Chantilly cream, and salted peanuts—initially threw John Currence for a loop. But it made sense once he tasted it, and the “Funky Monkey”—named after a coffee drink Dwayne fell for in Las Vegas—made the menu.

So have some family favorites. “I put my mother’s sweet potato pie on the menu last fall at the Grocery,” Ingraham says. “The only difference is I made a marshmallow fluff to put on top.”

Ingraham’s dream is to someday open his own place in Oxford. He wants to serve the kind of elaborate Sunday brunch he fell in love with at culinary school. “That complete buffet style,” he says. “Where somebody’s making your omelets fresh, right there. There’s a pastry section with miniature petit-fours and petite pastries and a showpiece that pulls you in, somebody doing cherries jubilee and bananas foster, flaring up right in front of you.”

I, for one, am hoping for macarons.

Vanessa Gregory is a writer and an assistant professor of journalism at the University of Mississippi.