Gravy is our journal and podcast duo of original narratives that are fresh, unexpected, and thought-provoking. Each year, Gravy supports the work of over 100 writers, illustrators, and photographers. Please donate now to help SFA make more Gravy. Click here to learn how to pitch for Gravy.

A Cardinal from the Ashes

Photo by Marion Post (Wolcott), 1940. Courtesy of the Library of Congress This piece comes from Gravy #46, featuring “5 under 35” in Southern food and drink. A Cardinal from the Ashes The Mauney brothers make award-winning gin in a shuttered textile mill  by Jed Portman The Mauney brothers don’t talk much. Going through the notes from our interview, I see the underlined interjection “DAD” often, in all the places where their father helped to push our conversation along. The Mauney brothers have no lack of projects to talk about. I think of what…

The Mauney brothers don’t talk much. Going through the notes from our interview, I see the underlined interjection “DAD” often, in all the places where their father helped to push our conversation along. The Mauney brothers have no lack of projects to talk about. I think of what a high school teacher said to me after a mild-mannered relative of hers got caught dropping rocks on cars from a highway overpass: “You’ve got to watch out for the quiet ones. They’re always up to something.”

Alex and Charlie Mauney—thirty-one-year-old twins and direct descendants of W.A. Mauney, who founded their hometown of Kings Mountain, North Carolina—began fiddling with alcohol four years ago, making wine in their parents’ garage. Before long, they became interested in hard liquor. They formed a business, Southern Artisan Spirits, and set out to make gin, their unaged spirit of choice.

The brothers tested a wide range of botanicals in ten-gallon batches of white liquor. “We worked on the flavor for a year,” Alex says. “Buying ingredients. Increasing them. Decreasing them. We probably went through close to a hundred test batches.” They call the product of their experimentation Cardinal Gin, for North Carolina’s state bird. It’s layered with the flavors of eleven botanicals—roughly twice the number in your typical gin—including cloves, frankincense, grains of paradise, orange peel, and spearmint.

Alex and Charlie rented space in a family-owned hoisery mill, a shabby place on the outskirts of town. Charlie left law school. Alex kept his day job with an engineering company and helped distill on nights and weekends. Southern Artisan Spirits was three people then: Alex, Charlie, and father Jim, who’d been downsized out of his job in 2008. Alex moved over to SAS full-time about a year ago. Besides that, not much has changed.

Cardinal Gin won the Double Gold at the San Francisco World Spirits Competition this year (the only American gin to do so), and now sells in five states. It is still produced and marketed by two brothers and their dad. 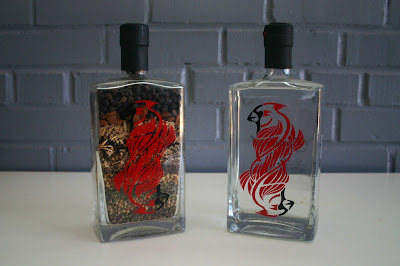 “Right now, we can handle it,” says Jim, “but of it gets any bigger—and it’s going to get bigger—we’re going to have to start hiring people.”

Late in my visit, as we sipped G&Ts, chilly air blew through the old loading-dock door. The brothers joked that gin-making might now be Kings Mountain’s newest industry, a replacement for textiles. While small-batch gin may not yet be the go-to tipple in working class Kings Mountain bars, the brothers say that their hometown—the first in the state to vote itself dry, in 1874—has shown nothing but support for the young business. And bartenders up the road in Asheville pour Cardinal with pride.

Now Alex and Charlie are working on a new project. It has something to do with the tall, boxy still in the corner—the only one of its kind, designed by the brothers with help from distillation experts—and the heirloom Bloody Butcher corn that a farmer is growing for them in nearby Shelby, North Carolina. The details are still coming together, but it’s true: The brothers, quiet as they might be, are always up to something.

Jed Portman is a Charleston, South Carolina–based writer and editor. You can follow him on Twitter at @jdportman.

A tacit understanding between server and guest has been altered.

Barbecue and celebrity have always been on good terms.