A Helping of Gravy: Pepperoni Rolls

Stuffed with sticks or slices of of cured meat and cheese, baked, then mopped with melted butter, the yeast-risen pepperoni roll is a West Virginia icon.

This article first appeared in issue #51 of our Gravy quarterly. The author, Martha J. Miller, is a West Virginia native who currently lives outside Washington, DC. Her work has appeared in the Washington Post and the Oxford American.

The Pepperoni Rolls of Princeton

STUFFED WITH STICKS OR SLICES of cured meat and cheese, baked, then mopped with melted butter, the yeast-risen pepperoni roll is a West Virginia icon. By most accounts, Country Club Bakery in Fairmont baked the first commercial rolls sometime between 1920 and 1940. Initially a favorite lunch of coal miners, pepperoni rolls are now sold in bakeries and grocery stores and eaten at college football tailgate parties. They’re even baked and served in lunchrooms at schools like Mercer Elementary School in Princeton, West Virginia.

Once each month, on what Princeton locals call Pepperoni Roll Day, Imogene Terry slides a pan of pepperoni rolls into the oven. As the school’s head cook, she’s been perfecting her recipe and technique for over thirty years. 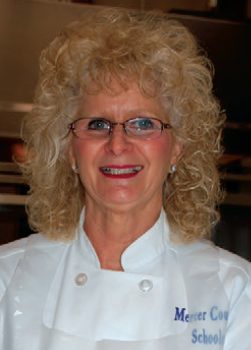 When the tubes of stuffed dough hit the oven, it happens quickly: Moist heat enlivens yeast. Meat and cheese burble. The aroma filters up the school’s stairwells, rolls down the hallways like a baptismal wave, and seeps under the closed doors of classrooms. As lunchtime nears, students scurry down to the cafeteria, take their places in line, and hanker for Terry’s pepperoni rolls.

I only learned Terry’s name recently. But I must have shuffled past her, sporting my boyish haircut and carrying my lunch tray, back when I was a Mercer student in the late 1980s. Like Terry, I was born in Princeton. But I didn’t get to stay long. My family moved out of state after my third-grade year. Since then, I’ve consumed my share of pepperoni rolls. But I’ve never tasted one that bested Terry’s.

It all started in 1983 when Terry, a mother of three school-aged sons, walked into the county’s Board of Education offices to apply to be a teacher’s aide and walked out a cook. Over her thirty-year career, Terry has come to enjoy the creativity and the relative autonomy of the position. “Our supervisors trust us to do our job well and right,” she says. Plus the children give great feedback. “A lot of them are eager to come back to school, even when they’re off, because they miss the food,” Terry says. “To hear them say ‘I love to eat at school’ is great. I just love feeding children.”

Terry learned to cook by reading a Betty Crocker cookbook that her mother gave her as a wedding present. “Even before I started working out of the home, I was like little Susie homemaker,” she says. Although her sons are now grown and no longer live at home, Terry still cooks stewed apples and biscuits and gravy for her husband of forty-two years, Paul, whom she met in church when she was a teenager.

Along with a staff of three, Terry makes the majority of the school’s daily lunch menu offerings from scratch. On monthly pepperoni roll days she arrives at 5:30 in the morning to start the dough. Using USDA yeast roll recipe “B-16,” Terry weighs fifty pounds of flour, mixed with dry milk, sugar, salt and yeast. Working a commercial stand mixer, she adds oil and water, stirring until a smooth, pliable dough comes together. 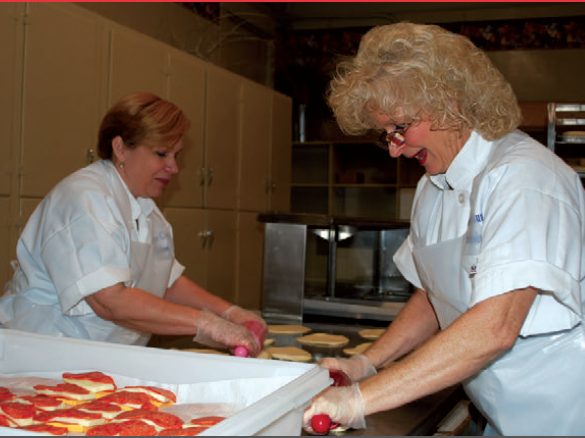 Once the dough is proofed, Terry and company roll it into 500 balls, top them with slices of pepperoni and a combination of mozzarella and cheddar cheeses, wrap them like mini-burritos, tuck the ends inward, and place them on sheet pans to rise again. Not long before lunch service begins, the pepperoni rolls go into 350-degree convection ovens to bake for fifteen minutes. Terry strokes the warm-from-the-oven rolls with melted butter. “The smell just fills the whole school when you’re making them,” she says.

In 2012, Mercer County Schools began serving free breakfast and lunch to all students as part of a national program aimed at curbing childhood hunger in high-poverty areas. “Sometimes this is their only meal they have to eat every day,” Terry says. On pepperoni roll day, Mercer parents, grandparents, and even Board of Education employees show up for lunch, paying the bargain price of $3.75 for a warm pepperoni roll and two sides.

Given the amount of care Terry and her staff take, and factoring in the culinary and coal-mining history of West Virginia, it’s easy to understand how pepperoni roll day at Mercer Elementary is a favorite. And it’s clear why I still remember those logs of meat and cheese fondly, more than twenty years after I left town. At a time when school-based scratch cooking is rare, Terry’s pepperoni rolls represent the triumph of tradition over convenience. They show how one woman’s love of people and place has transformed a public school cafeteria into destination dining.