A Virginia Mexican condiment speaks to place and change

The alerts started on Twitter. Then Instagram and Facebook. Texts and emails from friends, family, and readers soon followed. Did you know Mexican food in Virginia comes with white sauce?!

They all shared the same article: A May 3, 2019 piece in The Virginian-Pilot headlined “The story of white sauce, Virginia’s unique contribution to Mexican American cuisine.”

In the piece, reporter Matthew Korfhage dug into the history of a free condiment offered at sit-down Mexican restaurants in the Old Dominion, specifically around the southeastern part of the state. White sauce is exactly what it sounds like: a dip originally derived from a ranch-esque salad dressing, “fuming with garlic and spice,” as Korfhage put it. Restaurateurs from Virginia Beach to Newport News have served it for nearly forty years.

I read his piece, simultaneously gnashing my teeth and applauding.

I have documented Mexican foodways in the South for nearly a decade, and I’ve written a book about Mexican food in the United States. Yet I had never heard of Virginia’s Mexican white sauce.

Right before Korfhage’s piece ran, I had guest-edited a huge Eater package on Mexican food in the United States. One of my contributions was a map of Mexican American regional dishes: Tater tot tacos in the Pacific Northwest. Walking tacos (a bag of Fritos or tortilla chips dressed with cheese and beans) in the Midwest. Sugared carnitas around the Mountain West and Utah. Mississippi Delta hot tamales and ACP—the queso-smothered arroz con pollo of the South. I would have included Virginia-Mex white sauce, if only I had known.

No reporter likes to get beat on a story. But a gracious one compliments his competition, so I called Korfhage. After we hung up, I found myself searching flights to Norfolk and fantasizing about a salsa blanca tasting tour. The conversation reminded me that the South is changing in ways that we don’t often appreciate, or even notice.

And while what I just wrote is a truism, sometimes you need something as seemingly mundane as white sauce to truly get it. 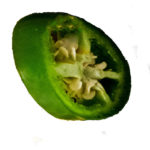 Korfhage had never spent any time in the South until he took a job at The Virginian-Pilot in April 2018. But the forty-one-year-old quickly did important work. He chronicled southeast Virginia’s disappearing food traditions like Tidewater yock (Chinese noodles sluiced in soy sauce–spiked ketchup) and Greek-inspired Norfolk hot dogs. He covered Hampton Roads’ vibrant Filipino and Caribbean food scenes. As a critic, he ate at mom-and-pops and white-tablecloth restaurants.

Korfhage initially avoided sit-down Mexican spots favored by non-Mexican diners. “There’s a tendency as a food critic to hunt down ‘authenticity,’” he said. “It’s a terrible term. But you want to bring people the ‘real deal.’ So when you see the familiar Mexican American restaurant, you have a tendency to overlook them. And it’s a mistake, because you overlook things like [white sauce].”

“For locals, [white sauce] didn’t seem interesting, because it had always existed.”

He tried his first batch in December 2018 and asked the restaurant owner what it was. Korfhage assumed the white sauce was a regional salsa from the owner’s native Nayarit, a state in western Mexico. But the owner explained that the crema was something he had only encountered in Virginia.

“Then I began to research,” Korfhage said, “and quickly realized it was a Hampton Roads phenomenon.”

He couldn’t find much written about the condiment, nationally or locally. The Virginian-Pilot had only unwittingly touched on the topic; every couple of years, it would reprint a recipe from 2006 due to reader demand.

“The Hampton Roads area is not on the laundry list that food writers have,” he admitted, as a sort of explanation. “And for locals, [white sauce] didn’t seem interesting, because it had always existed.”

His initial story traced the condiment to a since-closed Norfolk restaurant called El Toro, which was one of the first Mexican establishments in the region. El Toro began serving white sauce as a salad dressing in the 1970s, but customers began using it as a dipping sauce for tortilla chips. White sauce spread through Hampton Roads by the 1990s, as Mexican immigrants opened new spots and took with them El Toro’s sauce.

Over the years, white sauce grew spicier, reflecting a local embrace of Mexican flavors that tracks with national trends. At first, cooks spiced the dip with crushed red pepper and cumin. Later, they minced jalapeños or added the vinegar from cans of pickled ones. Milk became the base instead of Miracle Whip. It was thinner in some restaurants, oilier in others.

Like any good reporter, Korfhage continued to follow the white sauce trail. After the paper published the article that so many people shared with me this spring, he wrote a follow-up in which he revealed that John Villareal, a Mexican American Navy veteran who had run a chain of Norfolk restaurants in the 1960s, had actually created the white sauce that El Toro later adapted as its own. And Korfhage also heard from Mexican Americans in Richmond, 100 miles away, who said they had their own unique white sauce that dated back to the 1970s.

The two white sauce articles went viral. Nationally, many readers viewed white sauce as a regional oddity, like Rocky Mountain oysters or burgoo. Locally, it was one of the Virginian-Pilot’s most-read stories of the year. Readers responded with comments, phone calls, and letters, many bewildered that white sauce wasn’t as common in Mexican food nationwide as, say, cheese dip.
Korfhage’s colleagues were surprised by the fervor surrounding the pieces, and kicked themselves for letting the story sit in front of them all these decades. “They learned that something belongs to them,” Korfhage said. “That it’s part of the history of Hampton Roads. And they didn’t really know it until someone else told them.”

White sauce probably won’t find national traction, but I see it as a valuable metaphor for the New South. It’s a stand-in for changing customs and communities. For newcomers and regionalism. For all the things that make el Sur.

How many more white sauces are out there? Not the condiment, per se, but the idea? Local customs that tastemakers and burghers regard as quotidian, but that are actually remarkable? That say something about history, migration, and an evolving region, yet remain known only by the people who live it?

White sauce is a metaphor for all the things that make el Sur.

Hampton Roads white sauce deserves the same praise and promotion as barbecue and bourbon, hot chicken and Hoppin’ John. All of the South’s foodways do. It took a relative newcomer like Korfhage to give a Southern tradition widespread recognition. That shows there’s still work for all of us to do.

I say that as a challenge to ustedes and to myself. A decade ago, I had never eaten at a Mexican restaurant in the South. I assumed they were not just unremarkable, but an insult to Mexican culture. Eventually, I checked myself and visited one. My perspective changed to the point where I now cover Mexican food in el Sur at least four times a year.

Virginia white sauce reminds me how much I have to learn, and that my work will never end. And so off to Hampton Roads I go….

Gustavo Arellano is Gravy’s columnist and a features reporter for the Los Angeles Times.