The prompt was simple. A friend had spent some time in Arkansas. He noticed that several of the Mexican restaurants there featured an item he couldn’t recall eating elsewhere in the South: taco burgers.

Seasoned ground beef, shredded lettuce, diced tomato, and cheddar cheese. The ingredients of a hard taco, but inside a bun instead of a prefabricated shell. He swore it was good. I believed him.

So, he asked me, in my role as a scholar of Mexican food in the United States and a student of Southern foodways: What’s up with taco burgers? How did they end up in small-town Arkansas? Was it yet another genus in the taxonomy of Sur-Mex food, alongside the Speedy Gonzales combo plates and ACP (arroz con pollo) dinners that you find in the South alone?

I had never seen a taco burger in my decade-plus eating my way through the South’s Mexican diners, either. But my friend had it wrong. “That’s not a taco burger!” I blurted out after he texted a blurry photo. “That’s a bun taco.” 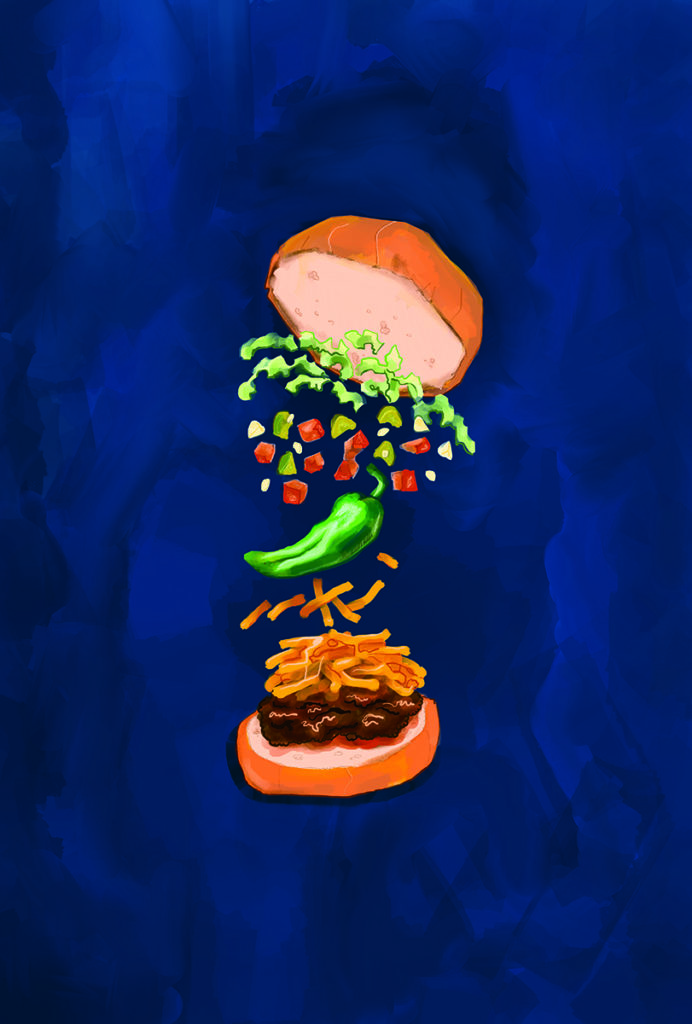 Same dish, different name, and with a documented history. It’s a relic of Cal-Mex cuisine, a direct connection to the roots of fast-food Mexican. The creators of the genre—Glen Bell (of Taco Bell fame), Ed Hackbarth, and Neal Baker, among others—all started with hamburger stands in the 1950s that later added hard-shell tacos as the dish became popular across the United States. They took their inspiration from the chili burger, the irresistible combo of chili con carne on top of a beef patty first made famous by Tommy DeForest at his Ptomaine Tommy restaurant in Los Angeles during the 1920s.

Mexican flavors in hamburger form have attracted Americans for over a century. The style of taco burger my friend ate in Arkansas had its American heyday during the 1970s and 1980s. It appeared on school cafeteria menus, as restaurant specials, and in newspaper food pages. Depending on the region, it went by the taco burger, bun taco, Mexi-burger, Mexoburger, Bellburger, and the Mexican hamburger—although that version was usually with a tortilla instead of bread.

There was nothing distinctly Southern about the taco burger, I was ready to tell my friend.

Sure, the South is one of the last places where you can easily find them. They’re at the Tamolly’s Mexican Kitchen chain in the Texarkana region and the Taco Casa chain around Tuscaloosa. Taco burgers pop up on chain-restaurant menus from Mississippi to Georgia to Tennessee—but not in the hundreds of Mexican restaurants run by immigrants from San Jose de la Paz, Jalisco, that have dominated Mexican food in the South for the past forty years.

In California, I know of one restaurant that sells taco burgers, and one chain that keeps it as an off-menu special. That’s it. They’re not bad.

The taco burger lives in an alternate universe, one where whites still dominate the Mexican restaurant scene and make antiquated meals for an aging, shrinking clientele. The scene is on the wane even in the South, as migration has altered expectations of what Mexican cuisine can be.

My friend’s query led me down a rabbit hole of taco burger what-ifs centered in Vicksburg, Mississippi. For a few years in the 1910s, a native son fused Mexican and American foodstuffs decades before it became popular to do so. The experiment went nowhere, but it showed what the South has always offered: a look into the future.

At the dawn of the twentieth century, hamburger meat was a second-generation German American still finding a new identity as a sandwich.

As any good immigrant does, the hamburger mixed with another newcomer, and an offshoot emerged: Spanish hamburger. 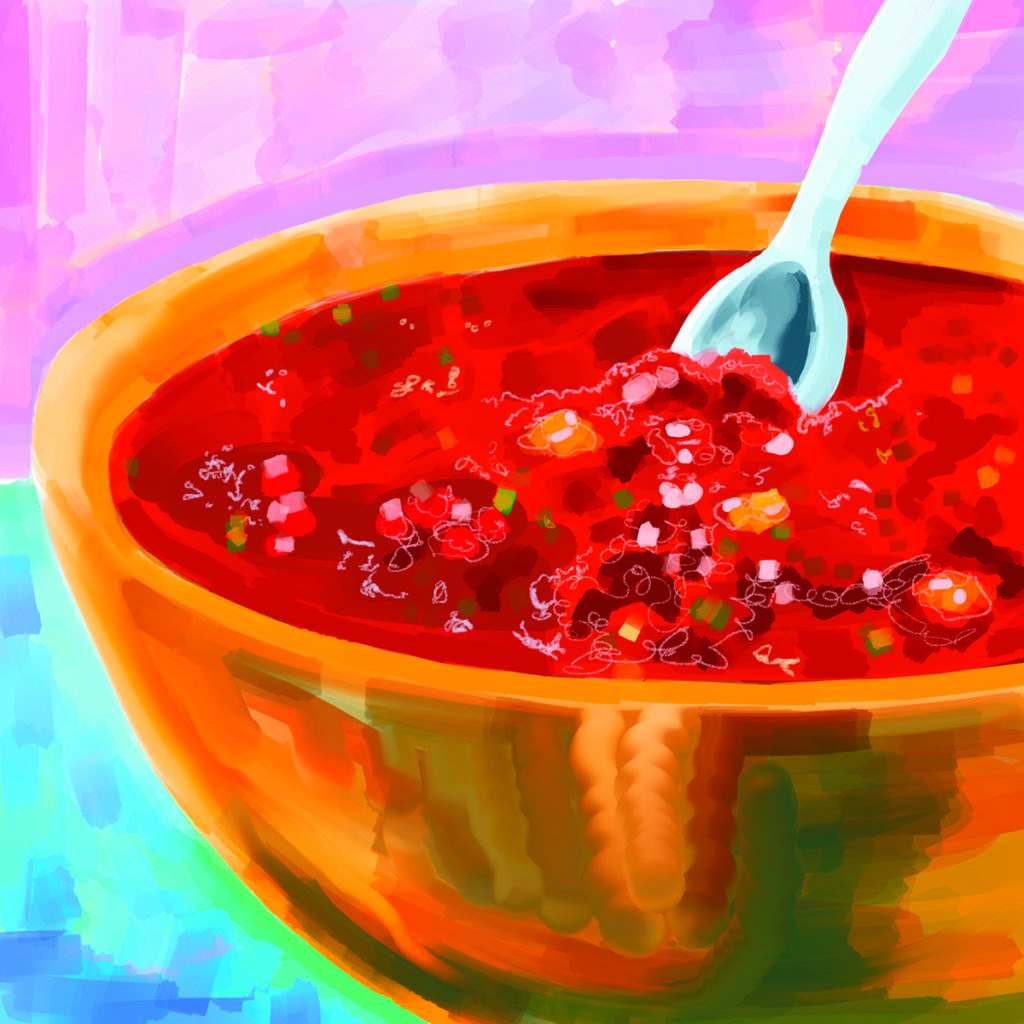 It was little more than a standard hamburger steak livened up with tomato sauce. There’s nothing Iberian about the meal whatsoever—the tomato, after all, is indigenous to the Americas. But the early 1900s was an era when “Mexican” was a dirty word, even as Americans began to seek out those flavors. So in order to make meals and culture palatable, Mexicans invented a Spanish past and present.

The taco burger lives in an alternate universe, one where whites still dominate the Mexican restaurant scene and make antiquated meals for an aging, shrinking clientele.

“Spanish hamburger” popped up in cookbooks and meat markets across the United States, including the South. But it never took off like, say, hot tamales or chile con carne. The dish largely disappeared by the 1950s, as tacos began to ascend nationwide and the hamburger sandwich took precedence over its steak version.

One person made a go for Spanish hamburger immortality: Eric W. Halpin, born in Vicksburg in 1878 to a Swedish mother and a German father. While his family remained in Mississippi, Halpin became a traveling salesman for a wholesale food company. Newspaper clippings track him moving through Denver, northern New Mexico, Fort Worth, and El Paso, with visits back home.

The 1910 census found him in Silver City, New Mexico, running a grocery store in the mining town up the highway from the state’s chile-growing region. Four years later, he returned to Vicksburg to open his own grocery. He brought along a native New Mexican: green Chile. 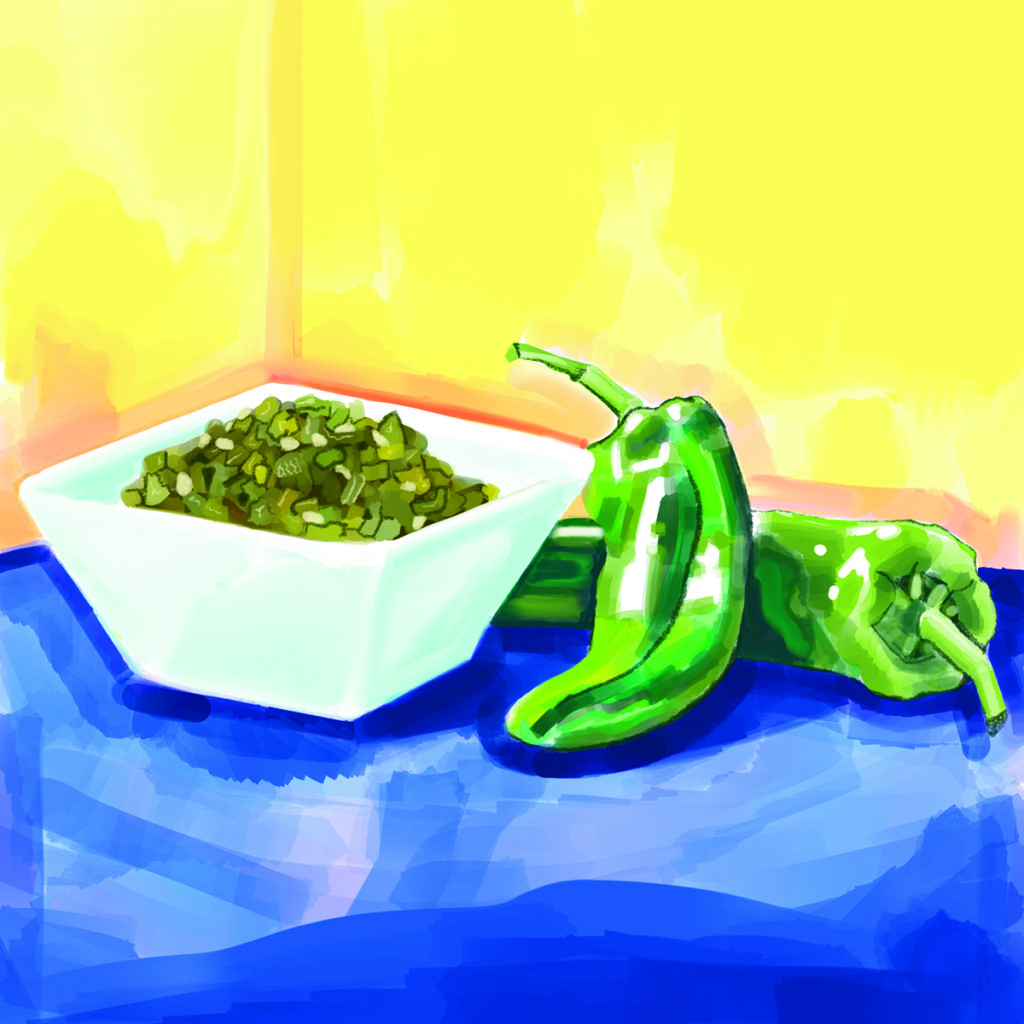 The fleshy, piquant pepper was virtually unknown outside the American Southwest at the time. For Mexican-style spice, Americans knew Tabasco and Gebhardt Chili Powder, and that was about it. But Halpin saw something in green chile. In 1915, he began mixing it into ground beef to make the Spanish hamburger mix he sold for a quarter a pound at his new Halpin’s Market.

His customers loved it.

An ad in the March 20, 1915 edition of the Vicksburg Evening Herald boasted that the debut of his green chile-laden Spanish hamburger “has been more popular than he anticipated. You don’t have to believe him—make him show you.”

Nearly every week, Halpin played up his Mexicanized Spanish hamburger with more enticing ads. “We have had nothing but repeat orders. Everyone likes it. It’s different,” read one. Another described the meat as “a welcome change from the customary round of beefsteaks, roasts, chops, etc.”

The demand for green chile itself grew. By 1918, Halpin stocked canned green chiles and even salsa, which an Evening Herald ad described as “a sauce, made of green chile, onions and fresh tomatoes” perfect for “spaghetti, roast or fried oysters.”

Halpin’s Mexican Spanish hamburger had a good run, but it didn’t last. He declared bankruptcy in 1922; by 1927, he was back in the Southwest. He eventually opened a trading post in Cuba, New Mexico. Halpin died at sixty-three in 1942 and was buried in Albuquerque.

He probably won’t make it into any histories of Southern or Mexican food. But maybe Halpin should. Food historians focus too often on heroes and villains, winners and losers. We don’t pay enough attention to the people and the foods that came and just didn’t stick unless we treat them as jokey anomalies. They deserve respect, too. Now, any time I think about taco burgers, I’ll think of Halpin—a man ahead of his time.

Gustavo Arellano is Gravy’s columnist and a columnist for the Los Angeles Times.