More than forty years ago, in her first cookbook, An Invitation to Indian Cooking, Madhur Jaffrey wrote an optimistic introduction about the acceptance of Indian food into American households: “Today Americans especially seem to have a great desire to experience the ‘real’ thing, an authentic taste, a different life style,” she wrote. “It is a hopeful trend and leads me to believe that if Indian food is ever going to come into its own in America, this is perhaps the time for it.”

I recently interviewed Jaffrey at an event, and I read back that quote to her.

“How wrong I was,” she said, sighing.

Since Jaffrey wrote An Invitation to Indian Cooking, the population of Indians in the United States has grown from about 206,000 in 1980 to close to 4 million.

Yet Indian home cooking occupies scant territory in food publications, recipe sites, and cooking shows. Coverage tends to involve versions of expected restaurant fare—butter chicken, tikka masala, naan—adapted for home cooks. Through their prolific work, people like Jaffrey and fellow cookbook author Julie Sahni insisted that Indian food could be a part of everyday American home cooking. Still, somehow, dishes like roast chicken and spaghetti are seen by many as the norm for home cooking, while Indian food, when featured, is relegated to “project” cooking—rarely the kinds of dishes you could make on a Tuesday.

Indian food is also still largely defined by the word “curry,” a somewhat meaningless term popularized by Europeans during their colonization of India to describe the various sauces and stews they encountered. The term allowed them to erase regionality or nuance among dishes. It led to “curry powder,” the yellow-hued seasoning sold in American grocery stores. Even Jaffrey herself, after railing against “curry,” published cookbooks with the word in the title simply because, she told me, she felt like she had no other choice.

Grocery stores now sell multiple varieties of miso and fish sauce—but rarely curry leaves or chaat masala. That may have to do with food publications, which have written those East Asian ingredients into consumer pantries for weeknight cooking yet have overlooked so many common Indian ingredients. The cuisine continues to be portrayed and perceived as complex, difficult to execute, and overly rich. As a result, home cooks are less likely to embrace Indian recipes.

Chitra Agrawal, who owns a line of Indian condiments called Brooklyn Delhi, nearly shut down her company last year. Her achaars just weren’t selling. So rather than focus on pickles, she reluctantly pivoted to products with more familiar names and uses: curry mustard and curry ketchup. Tikka masala- and curry-flavored “simmer sauces,” which similarly rely on consumer recognition, are the brand’s newest additions.

“America doesn’t exist without the search for Indian spices.”

This is the environment in which I wrote my cookbook, Indian-ish, which came out earlier this year. It’s about the dishes my mom taught herself to cook when she immigrated to the United States. Rooted in the Indian food of her childhood in Delhi, but used ingredients and flavors that she found in Dallas, Texas, where I grew up. My mother didn’t spend all day standing over the stove in our suburban Dallas home. On weeknights, when she returned from her job as a software developer, she pulled together twenty-minute dinners like dal chawal and aloo gobhi. She used feta for saag paneer and roti as a pizza crust. Once I started testing the recipes for Indian-ish, I decided to position the book as an accessible entry point into Indian home cooking, and a story of migration and culinary evolution.

This blended approach might be the best way forward in America, says Vishwesh Bhatt, the chef of Snackbar in Oxford, Mississippi. He says that Indian Americans need to speak directly to their heritage and setting. The problem with the way Indian food has been marketed “is that we are trying to sell this as something that is far away and something exotic and different,” he says. “We forget that all of this is in the history of America. America doesn’t exist without the search for Indian spices. We don’t talk about the importance of spice trade to the formation of this country.” He points to popular dishes in the South—like deviled eggs, Country Captain, and piccalilli, all of which rely on spices from South Asia.

Cheetie Kumar co-owns the restaurant Garland in Raleigh, North Carolina, where she serves coconut shrimp in a Bengali-inspired broth and corn cakes with paneer. “Bringing a personal story to these Indian restaurants and imparting the memories of our childhoods and our mom’s kitchen is the first step” to people accepting Indian food into their own kitchens, she says. This is not a dumbing down of Indian food—it’s a thoughtful, deliberate localization.

We won’t write books with “curry” in the title just because our publisher told us to.

“I don’t think Indian food will come to America through regional foods” of the various Indian states, says Jaffrey. We may instead get paneer corn cakes and my mom’s saag feta. People like Kumar and Bhatt “have taken real ideas from Indian food and put it into a modern way of American eating,” she says. “That’s wonderful, and if it comes from us, that’s always good.” The next phase is translating those restaurant dishes to the weeknight dinner table.

Indian home cooking may never look like what it does in, say, London—where Indian ingredients are more commonly understood and available. Jaffrey points out that the tie between Britain and India runs much deeper due to colonization.

Consider that the United States is only 243 years old, whereas Britain has millennia of history. America “is just beginning to learn about food,” she says. “We have to evolve a cuisine, and we are all going to be a part of it. There are a whole lot of us who have a say in the matter.”

That evolution could mimic the trajectory of Italian food in America, says Krishnendu Ray, a professor of food studies at New York University. When Italians first came to the United States in 1880, their cuisine was abhorred. It took about 100 years for Italian food to become accepted into the canon of American home cooking, and now so many households keep a few boxes of pasta and a can of diced tomatoes on hand for whipping up a quick dinner. There are plenty of time-intensive Italian dishes out there—lasagna from scratch, timpano—but in American grocery stores, there’s even more refrigerated ravioli, frozen eggplant parmigiana, and jarred tomato sauce. Italian food is convenience food.

Indians first arrived en masse to the United States in the 1960s. We’ve still got time before our food truly settles into American kitchens. It may not take a full 100 years, Ray says. There are more Indians in America now than there were Italians back then, and ideas move much faster thanks to the Internet and social media.

I belong to a generation of relatively new challengers to a barrier that Jaffrey, Sahni, and others have long tried to crack. The difference, Jaffrey tells me, is that my peers are less willing to compromise, and we exist in a more open landscape than she did. We won’t write books with “curry” in the title just because our publisher told us to, she says. And she’s right. We are ready to tear down the kitchen wall.

Priya Krishna contributes to The New York Times, Bon Appétit, and others. She is the author of the cookbook Indian-ish. 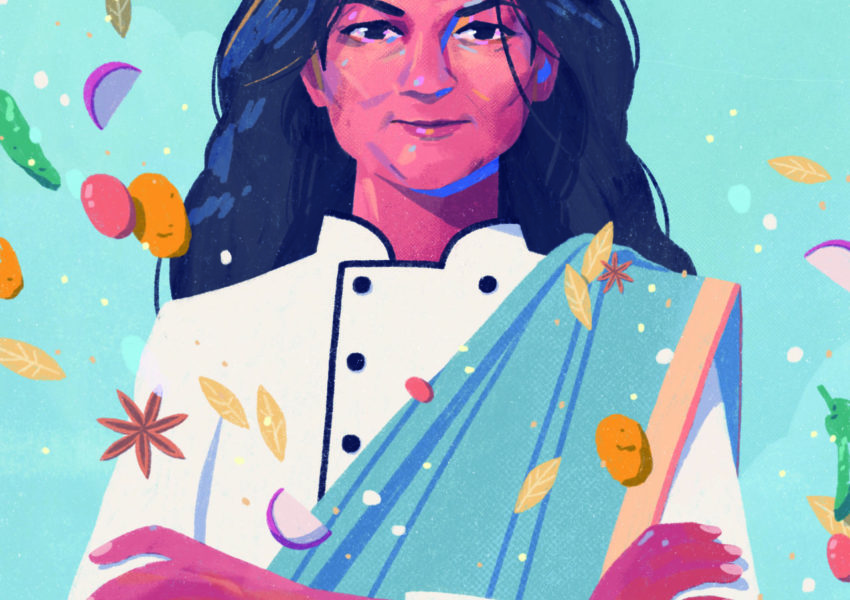 Comets have tails, and Raji left a particularly long one. Maybe we’re ready to see it now.