Sharon Benton: “I Could Have Been a Pioneer Woman” – Southern Foodways Alliance
March 13-14, 2021
2021 Spring Symposium
Support
the SFA

Sharon Benton: “I Could Have Been a Pioneer Woman”

Sharon Benton married the country ham and bacon curer Allan Benton, of Madisonville, Tennessee, right around the time he left the schoolhouse for the smokehouse. Over the ensuing decades, and her own long career in education, she has contributed to her family and community in ways that are comparable to her husband's hard work but may go unrecognized by people who merely know Sharon as the ham-maker’s wife.

“I Could Have Been a Pioneer Woman, Easily”

As told to Sara Roahen by Sharon Benton

Sharon Benton married the country ham and bacon curer Allan Benton, of Madisonville, Tennessee, right around the time he left the schoolhouse for the smokehouse. Over the ensuing decades, and her own long career in education, she has contributed to her family and community in ways that are comparable to her husband’s hard work but may go unrecognized by people who merely know Sharon as the ham-maker’s wife. Let her story, as told to Sara Roahen, represent the countless others of her ilk.

I’m the supervisor of curriculum and instruction in Monroe County for the pre-K through eighth grade students.

When Allan and I met, my ambition was to become a nurse. In those days, you didn’t aspire to become a doctor or a lawyer—females didn’t, at least. Allan was in education, and he said, “If you go into education, someday we’ll both have summers off.” And I thought that sounded good. Not exactly what happened! I’ve enjoyed education, though.

When we started dating, in 1973, he had just gone into the country ham business. At the time, I liked that he was a hard worker and was ambitious and not willing to be just status quo as far as income was concerned. That was his main reason for getting out of education: the income. He had just finished his master’s degree, and when he got his first pay stub it hit him: “Good grief, I’ve been going to school all this time and I get just this much of a raise?”

He’s always worked six days a week. We’ve only been on maybe seven vacations. In the ’70s, going to Myrtle Beach was as big as it got around here. I can’t remember how many days into our honeymoon we were, but Allan called his dad, who was overlooking the ham business. I could just tell he was bothered. I said, “It sounds like maybe you need to go back. Would you feel better if we just went on back?” “Yeah, yeah, I probably would.” So we came home.

After our daughter Suzanne came in 1980, I was home for almost ten years. My kids are close together—Suzanne and Elizabeth are fifteen months apart, and then Darrell is twenty-five months after Elizabeth. At that time, we weren’t really making any money. We were barely surviving. You start trying to pay for daycare for three kids, and we just felt it was more beneficial for me to be home with them. There were days when I would have loved to have an adult conversation—I won’t say I wouldn’t. But looking back on it, it was priceless.

I’m not lazy, so I made the girls dresses for church. I made Darrell little suits. I felt like I had to do something to contribute to the family since I was getting to stay home. I felt guilty about it, really. Especially in the fall and around the holidays when Allan would be swamped, I’d go down and help ship packages. I would make cheese balls at Christmas, and he would take them to the business and sell them. It was a way for me to feel like I was contributing.

We’d have the bacon a lot, especially in the summers. We might have BLTs. And we’d have ham and fried potatoes. But I can’t eat that much salt myself. We’d mostly have it on Sundays. I really love Allan’s sausage. I make my own pizza, and I love homemade biscuits and sawmill gravy—it’s just cream, flour, and sausage grease.

Allan and I put a garden out the very first year we were married. It was before people were talking about chemicals on your food, but that’s why we put a garden out: we didn’t want all that stuff on our food even then. In the summers I canned green beans, I froze corn, made pickles—all that typical housewife-y stuff that people used to do. And I still do. I loved it. I could have been a pioneer woman, easily. I would go out and pick blackberries on the side of the road somewhere and make blackberry jam, just because we liked it.

At one point I had an appendectomy. I came home, and it was in the summer, and I was down in the garden picking the cucumbers—because, of course, Allan hadn’t picked them while I was gone. And he came down there asking, “What are you doing? You’re just a hunter and gatherer!” He was upset with me for being down there, and I’m sure he should have been, but oh, it made me so mad. I was furious. And I kept picking and I thought, “Huh. That’s an okay thing to be: a hunter and gatherer.” Because I really am!

You could never count on when Allan was coming home, but his hours were more consistent and earlier then. He didn’t have Internet orders or restaurants, really. David Chang hadn’t heard of us yet! All of that made a difference. Now when people come in to the business, they want to talk to Allan. So whatever work or paperwork he has to do, a lot of times he has to do that after the business closes.

One of the reasons it was important for me to go back to work was the insurance. When I went back to work in 1988, we were paying like $12,000 a year for family coverage. It even sounds high to me today. My salary definitely was important.

Did Allan know how lucky he was to have a wife like me? We just both, I think, thought that’s how it was supposed to be. That sounds really old-fashioned, doesn’t it? I’m very much a traditionalist and a conservative, and I guess both of us are. I have high expectations for myself. I think I passed that onto my kids, too. 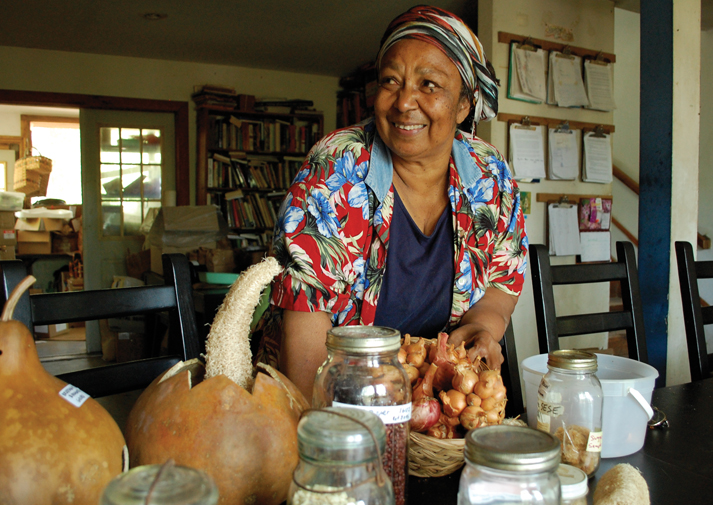 Ira Wallace is a seed saver, an educator, and the essential intellectual and physical energy behind Southern Exposure…