Savannah’s Black Maestros of Meat Many were enslaved. All persisted despite white efforts to ban them from butchery.

My legs and feet shivered with cold. I had underestimated how frigid a winter morning in Savannah could be. But the sun beaming on my cheeks and forehead shone so bright that I struggled to catch sight of the three-story Savannah building that Vaughnette Goode-Walker pointed out.

Goode-Walker, founder of the company Footprints of Savannah, led our tour about urban slavery. Just beyond the City Market, we stood in a square of perfectly pruned trees, manicured green grass, and metal benches, as she gestured to the West Saint Julian Street building, which now houses a pet bakery and store. This old brick building, she said, still has a story to tell.

From the 1850s until December 1864, the Montmollin Building housed one of Savannah’s largest slave marts. Before selling enslaved Africans, before committing them to wretched lives of labor, traders warehoused captured Africans on the top floor here in what was then known as Bryan’s Slave Mart.

Goode-Walker said the building later became a gathering place for freedpeople to mobilize and educate themselves in the name of better futures. But I didn’t expect to hear what she said next: Between the 1840s and 1850s, Ulysses L. Houston, an enslaved man who later became a renowned pastor and community leader, worked in the basement of that active slave market as a butcher, earning his own money, making his own life, hearing the groans of other exploited people. His story of enslavement, resistance, freedom, and entrepreneurship showcases the role of artisans in the African American fight to survive and thrive.

Outside Savannah’s bustling core, enslaved Africans and freedmen cultivated the land that fed the city. They raised cattle, hogs, and poultry. And they slaughtered and sold those animals, too.

Enslaved butchers sometimes won a measure of freedom by way of their skills. Some “hired their time,” a practice that allowed them to work for “employers” other than their owners. Such arrangements were prevalent in antebellum Savannah and other Lowcountry cities. Working for men who were not their “masters,” enslaved workers could earn wages or fees. Often, they turned over all those profits to owners. Occasionally, they got to keep a share. Historian Whittington B. Johnson wrote in Black Savannah 1788–1864 that “hiring out” was a “hatch in the peculiar institution to escape the more pernicious aspects of slavery and live quasi-free lives.”

Jackson B. Sheftall, son of a white man and an enslaved woman, was one of these men. He took up butchery at age eighteen. A decade later, he had leveraged that first entrepreneurial move to build a mini-empire.

Outside Savannah’s bustling core, enslaved Africans and freedmen cultivated the land that fed the city. They raised cattle, hogs, and poultry. And they slaughtered and sold those animals, too.

“There were very few free colored people like me. … I had been doing business here a long time, and was generally thought a great deal of among the whites here. Because I kept to myself,” he reportedly said in testimony before the Southern Claims Commission, which considered Southern Union sympathizers’ claims to compensation for property confiscated or supplied to the U.S. Army (meaning, the Union) during the Civil War.

Privilege, connections, and skin color likely paved the way for Sheftall’s success. But his status did not protect him. Local newspapers referred to his “mulatto” status frequently and with scorn.

“[…] He was a remarkably enterprising man, and the Confederates recognized his skills and success by contracting with him for meat during the war,” historian Jacqueline Jones said in regards to Sheftall’s work with Confederate Army General W.H. Davis. Sheftall directed forty free and enslaved men who supplied meat to Davis’ troops.

Jones writes in depth about Sheftall in her essay Wartime Workers, Moneymakers: Black Labor in Civil War-Era Savannah. From her, we know that he sold slaughtered beef, tallow, corn, and other commodities, and that his multiple wagons and horses traversed the city. We also know that he sold cow tongues and livers, and got to keep the profit from those goods.

“‘Hiring out’ was a ‘hatch in the peculiar institution to escape the more pernicious aspects of slavery and live quasi-free lives.'” — Whittington B. Johnson

Simon Middleton leased his labor out, too. According to Johnson, he was known as one of the “best hog butchers in the market.” For the right to run his business, Middleton paid his master $12 per month. He retrieved hogs from his customers, loaded and carried them to his shop, slaughtered the animals, and returned with the requested meat.

“Hiring their time” permitted many enslaved men to build skills, savings, and clienteles. Their success threatened white butchers, and that knowledge bubbled into frustration. In antebellum Savannah, Timothy James Lockley wrote in Lines in the Sand: Race and Class in Lowcountry Georgia, “the greatest conflict between white artisans and African Americans arose over the retailing of meat.”

Scholar Anne Yentsch documented one black butcher in Savannah in 1810. She found evidence of five by 1823. That jump might have influenced white butchers’ efforts to organize against their black counterparts.

Several white butchers sent an 1820 complaint letter to the Savannah Republican newspaper and later petitioned the city council in 1822. Their goal: to block black butchers, whether free or enslaved, from working their trade from rented stalls in the City Market. White butchers charged that the unwanted competition had cut into their business. They also alleged that black butchers sold meat they had stolen from “respectable inhabitants of the city.”

The city enacted ordinances in 1824, 1826, and 1829. Each escalated the battle. Each made it clearer that black butchers of any status—slave or free—weren’t welcome to sell meat anywhere in the city. Such bans likely lowered the number of black butchers working openly in the city. But black butchers didn’t quit selling meat in Savannah. Twenty years after that last ordinance took effect, Sheftall opened his butcher shop, specializing in cutlets, chops, and steaks.

The restrictions kept coming. In 1854, the city council passed an ordinance that no slave could act as a butcher without a white person present. Despite these laws, some ex-slaves held onto these skills beyond their captivity, wielding cleavers to artfully carve out livelihoods and identities. And, according to an 1894 article in the Savannah Tribune, the freedman butcher Sheftall grew rich in the very same era when these ordinances proliferated.

In antebellum Savannah, Timothy James Lockley wrote, “the greatest conflict between white artisans and African Americans arose over the retailing of meat.”

After the Civil War, when nominal equality allowed black men to compete as butchers, many emerged as well-known entrepreneurs. For them, the dirty work of slaughtering animals and preparing their carcasses could be lucrative.

Born in Grahamsville, South Carolina, Ulysses Houston was one of the boldest entrepreneurs. Back in the days before freedom, he paid his master $50 per month to have a semblance of independence. That conditional independence translated to unusual mobility; he traveled throughout eastern Georgia to secure cattle to slaughter, butcher, and later sell.

In addition to his work as a butcher, he also served as the pastor of First Bryan Baptist Church. From that pulpit, Houston boldly called for slavery’s end. When slavery did end in Savannah, he was present to discuss what the coming political order would look like for the nation’s newest citizens.

Three months before the official end of the war, Savannah’s black religious leaders told Sherman’s delegation what the freedpeople needed to fully realize the freedom guaranteed by the Emancipation Proclamation two years earlier. Speaking through spokesman Garrison Frazier, the men said: “The way we can best take care of ourselves is to have land, and turn it and till it by our own labor—that is, by the labor of the women and children and old men; and we can soon maintain ourselves and have something to spare.”

Soon after that meeting, Sherman would sign Special Field Order No. 15, most commonly known as the federal government promise’s of “forty acres and a mule”—a promise that went unfulfilled for the nation’s freedpeople.

In a fit of determination, Houston took the order as a sign to claim the self-sufficiency for which he and other black Savannah residents had long hungered. Inspired, he led about 1,000 black Georgians to nearby Skidaway Island. It was a short-lived experiment. A year later, the land was seized as a new administration under President Andrew Johnson rescinded the order.

Born into slavery, Houston rose to become an influential politician and beloved community leader. A butcher and preacher, he led his people in times of strife and promise, leveraging his skills to gain freedom for himself and others. And his people did not forget him. More than thirty years later, 7,000-plus people flocked to pay their last respects at his 1889 funeral, considered the largest memorial in city history until that time.

His tie to the Montmollin Building—a building that to me appeared ordinary enough to overlook on a frigid winter morning—is a mighty connection.That building was both a reservoir for slavery’s horrors and the key to financial freedom through butchery. Savannah, in many ways, is like this: layers of historical discoveries sandwiched between each other, thick with stories.

Nneka M. Okona is an Atlanta-based journalist whose work has appeared in Ebony, The Wall Street Journal, and Travel + Leisure. 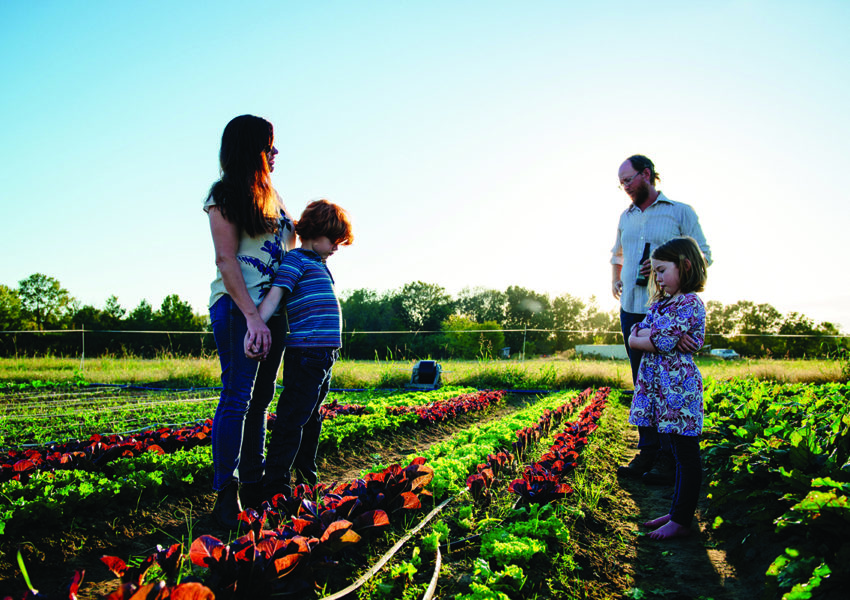 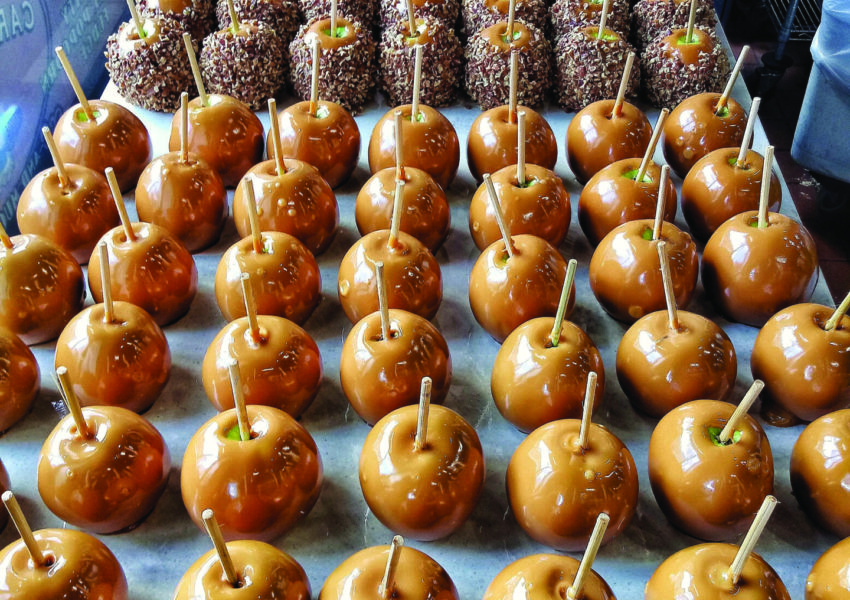