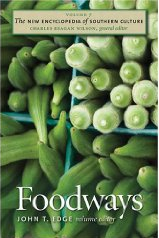 Part of the New Encyclopedia of Southern Culture, this volume, edited by SFA director John T. Edge, is the first encyclopedia of the food culture of the American South. It surveys the vast diversity of foodways within the region and the collective qualities that make them distinctively southern.

Articles in this volume explore the richness of Southern foodways, examining not only what Southerners eat but also why they eat it. The volume contains 149 articles, almost all of them new to this edition of the New Encyclopedia of Southern Culture. Longer essays address the historical development of Southern cuisine and ethnic contributions to the region’s foodways. Topical essays explore iconic Southern foods such as moon pies and fried catfish, prominent restaurants and personalities, and the food cultures of subregions and individual cities.

If you can’t find the Foodways encyclopedia in your local bookstore, click below to order it from Amazon.