It is only by cartography, law, and convention that Alabama is a state. From within, it reads like a perverse anthology in which the Appalachians give us a taste of the Carolinas, the Tennessee River guides a northern influence, the pine barrens continue the work of Georgia, the Black Belt gestures toward Mississippi, the coast combines Florida and Mississippi, and the Wiregrass gives you a sense of another world entirely.

Opened in 1952, Top Hat Barbecue is located in Blount Springs about thirty miles north of Birmingham. The Top Hat’s…

Rudolph McCollum spent thirty-two years as a schoolteacher in Fayette, Alabama. Upon retiring, Rudolph had a chance…

For years, Roger “Rabbit” Smith worked for Pullman Standard, putting brakes on boxcars. On weekends and holidays he…

In 1973 coalminer Leo Headrick saw an opportunity to get out of the mines, make a good living, and work alongside his…

One of the oldest barbecue joints in Birmingham still in operation, the Golden Rule opened its doors in Irondale in…

Demetri Nakos arrived in Birmingham from Greece in 1955. His first job was with an uncle who ran Oakland Barbecue.…

Chuck Ferrell, along with his wife Bonnie, founded Chuck's Barbecue in Opelika, Alabama, in 1976. Most weekdays you…

In 1975 Roger Guin started an Oldsmobile dealership in Winfield, Alabama. Around 1985 he switched to selling…

Originally from Cumberland City, Tennessee, Bob Sykes grew up in the country, experiencing hog killings and learning to…

Joe Hubbert coached football for twenty-eight years. Before he retired as a coach, Joe got into barbecue. In 1987 he…

Bob Gibson was a big, good-humored man, who never met a stranger. In 1925 he was making a living working for the L & N…

A native of Northport, Alabama, George Archibald spent years working in a steel mill. His wife, Betty, worked at a…

It is only by cartography, law, and convention that Alabama is a state. From within, it reads like a perverse anthology in which the Appalachians give us a taste of the Carolinas, the Tennessee River guides a northern influence, the pine barrens continue the work of Georgia, the Black Belt gestures toward Mississippi, the coast combines Florida and Mississippi, and the Wiregrass gives you a sense of another world entirely.

So, it’s no wonder that you can find, in Alabama, almost any kind of barbecue. Whether the influence is Cherokee, Appalachian, Georgian, Mississippian, Floridian, Tennesseean, Texan, or just plain Alabamian, barbecue springs up everywhere, with significant variation.
Near Scottsboro, sandwiches may wear slaw, Carolina-style. Around Decatur, the chicken swims in a unique white sauce. In Birmingham, sauces tend more thickly, spiced by the hands and traditions of the city’s Greeks, laved on pork shoulder, pork butt, pork ribs, and even beef brisket. In east Alabama, the sauce goes orange, where mustard sharpens tomato in a thin vinegar, a delightfully acrid atmosphere for pork chopped or sliced or still on the slab.

There are some superstars, and each one represents something about its town of origin. Dreamland, begun outside of Tuscaloosa, championed ribs with a menu that once included only whole and half slabs, a rib sandwich, and tea—no cole slaw, no potato salad, don’t ask, as the signs once read—surely representative of rural Alabama, concentrating on the once-cheap, once-tough cut of the rib. Big Bob Gibson’s, centered in Decatur, offers an Appalachian taste for shoulder in one of the tenderest sandwiches anyone has ever made, but also presents north-central Alabama’s peculiar agricultural heritage with its numerous applications of chicken.

Most towns, however, like the state itself, reflect various influences, interests, and tastes. In Auburn, folks decamp into factions preferring Country’s almost obscene largesse (beef ribs appear beside the whole rest of the barbecue universe on their menu) or the Carolinian mustard shoulder sandwiches famous at The Barbecue House or the orange-sauced shoulders and ribs at Byron’s. In Gadsden, Pruett’s dominates the popular imagination, but one can also side with Barbecue Bob’s or with the more obscure Merrill’s, home of the #4 (whole habaneros chopped into pork and served on a bun without relief).

In Birmingham—well, in Birmingham, you can find whatever you like. Since 1920, more than 500 barbecue restaurants have opened in Birmingham, most erupting like slag-heaps around the city’s steel mills. Barbecue was Birmingham’s first convenience food, and today, in an era of imported Burger Kings and home-grown Chik-Fil-A’s, barbecue remains dominant, flourishing in local empires—including Golden Rule, Johnny Rays, Blue Moon, and Jim N’ Nicks—and in more singular enterprises, like Bob Sykes’s, Demetri’s, or Carlisle’s. Some of the famous joints—like Ollie’s, once center table in a segregation suit that proved the power of the 1964 Civil Rights Act—are gone, but new ones open all the time.

Carolinians and Tennesseans and Kansans brag about their barbecue meccas all the time, and I’ve eaten enough to know they’ve got evidence for their cases. Nevertheless, I can hardly imagine a better state for a lover of all things barbecue. If you’re willing to wander, willing to try, willing to look, you’ll find whatever you’re looking for right here in Alabama.

Jake Adam York is a poet, SFA member, and bbq-lover. You can see more of his work here. 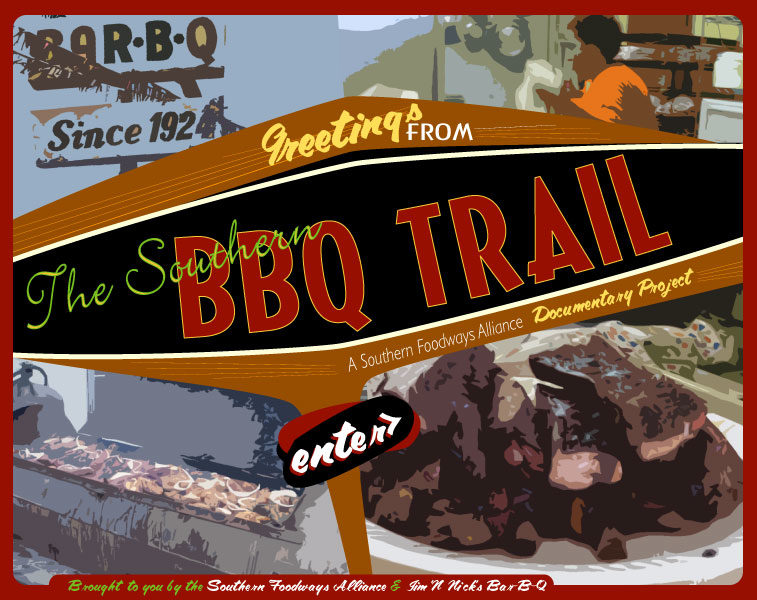