Down the street behind the lightning bolt gates of Graceland the King takes his rest.

Here, bolted to the same cinder blocks that hold the disembodied hog who seems to be hitchhiking on both sides of the highway, is another barrier.

Soldered to these gates by butts and shoulders, a set of praetorian porkers perpetually prowls the perimeter, taking care of their business. 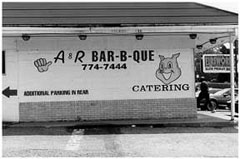 Inside, next to the cookies and the candied apples, customers crowd the counter.

A young lady inks the orders, her pen stopping only long enough for her to turn and relay the request to the cooks.

I can see them chopping up parts of pigs, putting the barbecue on the buns. They stack the sandwiches and feed them through the rectangular hole that connects the kitchen and the counter.

The cook takes another ticket and returns to the table to start the next stack. I

In the middle of the shirt is a giant golf ball. In the middle of the golf ball is a pig in a yellow blazer who bears a striking resemblance to Jerry Lee Lewis. The pig has his arms outstretched, but only to the elbows. His forearms point toward the tee. stare at the back of his shirt.

With every rise and fall of the cook’s cleaver he jiggles a bit back and forth, dancing the only dance he could possibly perform from that the position–the Monster Mash. 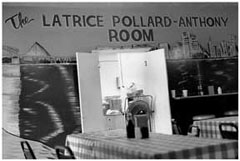 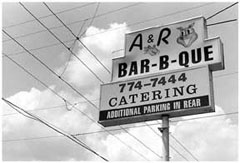