Corned Beef Sandwiches in the Delta

It’s the season for communal meals, like Easter dinners and Passover Seders. In the Mississippi Delta town of Greenville, members of the Hebrew Union Congregation synagogue have been hosting a community meal on the past 130 years. It brings together hundreds of Jews and gentiles from all over the Delta to share a corned beef on rye.

It’s the season for communal meals, like Easter dinners and Passover Seders. In the Mississippi Delta town of Greenville, members of the Hebrew Union Congregation synagogue have been hosting a community meal on the past 130 years. It brings together hundreds of Jews and gentiles from all over the Delta to share a corned beef on rye.

A deli in Chicago ships in 400 pounds of corned beef. A nearby bakery makes the rye bread, and Leanne Silverblatt, whose family has lived four generations in the Delta, makes the sauerkraut using Betty Goldstein’s recipe. Some say, though, it’s not as good as Betty’s because it’s missing the ash that would accidentally fall in the pot from her cigarette. Although the menu has changed over the years, the meal is still unabashedly Jewish – corned beef on rye, sauerkraut, potato salad, and a brownie – eleven bucks.

In the past twenty years, Greenville’s once thriving Jewish population has dwindled to just a few dozen, and there weren’t enough synagogue members to make the 1,500 sandwiches for the luncheon. So the Jews of Greenville got a little help from their friends – Baptists, Presbyterians, Catholics, and Episcopalians.

Each year the number of Jews in Greenville gets smaller. Some older residents have died. The children have moved to places like Atlanta, Jackson, and Memphis. Even Esther Solomon – the matriarch of Greenville’s Jewish community whose great-great grandmother started the tradition in the 1880s – is leaving after this year’s luncheon to be with her adult children in Atlanta. Solomon worries that even with the help of Christian volunteers, the days of the luncheon – and the Jewish community in Greenville – are numbered, and the 130-year-old tradition of Jews in Greenville and the deli lunch will disappear.

Marcie Cohen Ferris
Matzoh Ball Gumbo: Culinary Tales of the Jewish South
The Edible South: The Power of Food and the Making of an American Region 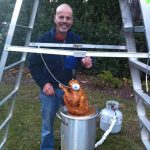 Following a successful career in public health at the U.S. Centers for Disease Control and Prevention (CDC) as a medical epidemiologist, Philip Graitcer became a full-time independent radio producer. He has been creating and writing short documentary features on arts, culture, health and science for almost five years.