Wayne Curtis reflects on what’s lost and gained as cocktail and spirits writers—as well as curious consumers—seek out well-supported history over well-spun stories behind the bar.

Striking up a conversation with a stranger in a bar is accepted, even expected. And storytelling is a big part of that engagement.

But when it comes to origin stories behind cocktails, Wayne Curtis has noticed a shift in focus over the last ten years. Hand in hand with the recent cocktail revival and the increased professionalization of bartending, an obsession with fact over fancy has emerged.

I started hearing a phrase in bars that I don’t think had ever been uttered before inside a bar: ‘What’s your source on that?’”

In this episode of Gravy, Wayne Curtis reflects on what’s lost and gained as cocktail and spirits writers—as well as curious consumers—seek out well-supported history over well-spun stories behind the bar.

Wayne Curtis. And a Bottle of Rum: A History of the New World in Ten Cocktails.

Robert Simonson. A Proper Drink: The Untold Story of How a Band of Bartenders Saved the Civilized Drinking World.

David Wondrich. Imbibe! Updated and Revised Edition: From Absinthe Cocktail to Whiskey Smash, a Salute in Stories and Drinks to “Professor” Jerry Thomas, Pioneer of the American Bar. 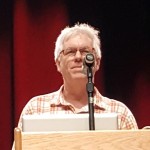 Wayne Curtis is a freelance journalist and writer. He writes about travel, architecture, history, and historic preservation for such publications as The Atlantic, New York Times, Wall Street Journal, and Bon Apetit, among others.