After the dropkicks, dinner together

Polo-shirted Chili’s staffers bag trash and sweep errant fries from beneath empty tables. Every so often, they peer past a wooden column to check the progress by the fogged windows.

It’s close to midnight when Axel Foley picks up an ear of chili powder–dusted corn by its skewer and holds it aloft. In perfect Jack Black-as-Nacho Libre brogue, he says, “Get that corn out of my face!” Laughter erupts.

They’ve just come from “The Evil Dead,” Southern Violence and Wrestling’s Halloween-season show. The Athens, Georgia–based promotion, industry parlance for an organization that puts on shows, brings independent wrestlers from across the South to its monthly events at Southern Brewing Company, on the city’s industrial outskirts. It’s home field for Axel, SVW’s reigning champion.

He’s the Peyton Manning of the promotion, ferociously talented and likeable. The one who lingers after the show to high-five the kids, squatting in his striped tights so he doesn’t talk down to them.

Tonight he took out his brother, Nitrus Molotov, by smashing a steel chair to his face. They aren’t brothers in the biological sense, but they are partners in this brutal dance. Nitrus, née Luis Chevere, met Axel (whose real name is Alex) when they were teenagers in the south Atlanta suburbs, both sons of Puerto Rican mothers, both obsessed with professional wrestling. They hung a plastic WWF belt from a tree, laid plywood on top of stacked bricks, and took turns slamming each other through it. The first time they stepped into a real ring, it was to fight each other. They came of age during WWF’s golden era and reenacted the moves they saw on TV in the backyard. When they were seventeen, they met retired wrestler Rocky King at the gym. He was recruiting talent for his new promotion and told them if they would help set up the ring at the next show, he’d train them for free. He was impressed with their self-taught skills and put them in that night. They played referees who get into a punchout over a misunderstanding in the ring.

Trust makes the action believable. To convince fans you hate somebody in the ring, it helps to love them outside of it. Moments before they caromed between the ropes, Nitrus and Axel bound their hands behind each other’s necks, pressed their foreheads together, and prayed. Lord, protect us out there. Guide us. Bless us to use this talent to entertain the fans and glorify You. Thank you, Lord, for our blessings, for letting us do what we do, for keeping us alive. And then, to each other: I love you, man. Love you.

Wrestling is church for these men, and the late-night meal that follows is fellowship. Tonight, a pack of wrestlers wiped the blood from their faces, peeled off their Lycra for jeans and t-shirts, and piled into cars headed for Chili’s. Facing a two-hour drive home, Nitrus opted out of dinner.

In the old days, they sat together. Now they settle for two four-tops separated by an empty table—pandemic rules. Jamie Holmes, a seventeen-year-veteran of wrestling who funnels aspirants to SVW via his backyard training ring, takes one table. His thirteen-year-old son, Billy, files in next to him, along with Shane Bruce, an SVW security guard, and Brian Snyder, an announcer and backyard trainee. Axel sits at the other table with Jeremie Prater, an SVW referee they refer to by last name only, and Ryan Murdoch, the thirty-five-year-old special-education teacher who created SVW six years ago.

Fifteen seconds pass. He reveals that actually, the last thing he ate was barbecue nachos from the food truck parked outside the brewery.

Prater cuts grass, trims bushes, and whacks weeds for a living, activities that limit the evidence of his eating habits to a slight bulge in his abdomen. He orders a six-ounce sirloin, double fries, and two sides of ranch.

Axel and Ryan, who once suffocated Axel with a grocery bag and ripped the championship belt from his hands, go in on the “Two-for-$25,” a date-night dinner that includes a shared appetizer. Ryan gets a quesadilla. Axel orders a half-rack of ribs and picks the starter: fried pickles.

Tonight, in a surprise ending to the show, Axel stormed the ring and joined Jamie and Ryan in their newly formed bad-guy troupe, F.A.M.E. “Seems like a lot of people’s hearts have been broken tonight,” the neo-villain roared into the mic as raindrops peppered his face. He harangued the audience for booing him when he began his championship ascent. “We are not the villains in this story. You are the villains!” he screamed. It was a blow to the 120 spectators in lawn chairs around the ring, many of whom chanted his name before every match in his eighteen-month rise to the top.

The crowd hates it when a good guy goes bad. It’s called a heel turn, an industry trick to boost ticket sales. When fans are angry, they show up to see what happens next. SVW co-owner Justin Legend, who writes the shows, engineered Axel’s ascension and then walloped fans with his fall from grace. He did it because he knows they’ll pick themselves off the floor and come back for more.

Tonight, they threw empty plastic cups and Mountain Dew bottles as Axel delivered his shameful monologue. A sad, soaked little girl, waist-high to the gray-haired woman behind her, gripped an empty Capri Sun pouch and stared in disbelief.

After the show, a few dubious fans approached Axel for hugs and high-fives. He shrugged them off and returned to the locker room. They pleaded with a bartender to summon him, to no avail.

Wrestling is about manipulating emotions. The show writer wants you to cheer for one guy and lob obscenities at the other.

“You do that, you kill the story,” Prater says, looking up from his phone. Wrestling is about manipulating emotions. The show writer wants you to cheer for one guy and lob obscenities at the other. Breaking character cracks the veneer. In the safety of a strip-mall Chili’s, these wrestlers skate between their roughhouse gimmicks and their workaday selves. Around this table, away from the watchful eyes of an audience that insists on typecasts, they touch common ground.

Axel pulls fried pickles from a metal basket. “I was just teaching them the reality of life,” he says, referring to his heartbroken young fans. “You get jabbed, and it hurts sometimes.” When a server appears—“Y’all doing alright over here?”—his snarl wilts. “Doing great, buddy.”

The server sets the drinks on the table. Ryan reaches for one of the plastic beer mugs and Prater pulls it back. “Does that look like tea?” he asks. “If your tea is that dark, you got a serious problem.”

“You do,” Ryan comes back at him like a big brother.

Prater laughs. “I don’t know what it is, but the combination of sweet tea and saltines, maaan. I used to get a big glass of sweet tea, go into my room, and watch old wrestling. Just sit there and just eat saltines and drink tea.” He shakes his head at the recollection.

Axel cradles his Samsung and responds to a post on his Facebook page. Ryan prods the reddened skin on his forearm, a grid-like brand left when another wrestler known as Chop Top smashed a galvanized steel gusset plate into him, then picks up his phone to craft a Facebook message thanking fans who stuck it out in the downpour.

Prater breaks the calm with a headline from his news feed. “Macaroni and cheese on a hot dog. I wonder if that’s any good?”

“Macaroni on a hot dog is something the school would do,” Ryan says. “You should see the weird-ass combinations these kids eat, man. I’m like, I’m sorry, I wish I could pack your lunch.”

Axel interrupts. “Ryan, you gonna eat some of these fried pickles, you little shit?”

Around this table, away from the watchful eyes of an audience that insists on typecasts, they touch common ground.

Over the next hour, warm rain will continue to fall. Grown men will feast on quesadillas and Crispy Chicken Crispers and drain plastic steins of sweet tea and Dr Pepper. The only mention of politics comes at the end of the night, when Jamie touts an obscure puppet show wherein Donald Trump’s hair sprouts feet and walks off his pate. They all laugh.

The server appears again and asks Ryan and Axel if they’ve decided on a dessert to share.

Ryan looks up. “Let’s do the cheesecake.”

The server returns a few minutes later and asks which tabs are separate.

“Put everything on that card,” Jamie points to Brian. “You’re a teacher, you’re making that big money.”

Brian, who teaches middle-school English, shakes his head. “I think you need to reevaluate.”

“What the hell is this? Southern Violence and Teachers?” Prater asks.

Brian’s quick to the punch. “Yes. We have to get our aggression out somehow.”

Only Axel’s plate remains. He bites into the skewered corn.

And they’re off again, a pack of burly Cinderellas basking in the afterglow of the ball, clinging, just a few minutes more, to the fantastical roles they’ll soon leave behind. To watch wrestlers soften their fists and belly-laugh across the table is a boisterous reminder that when we leave our gimmicks at the door and pull up a chair, we have more to rally around than fight about. It pecks at a bigger, real world question: Are we as divided as we think we are? Or does the power broker behind the curtain have something to gain by our division?

Brian goes ring announcer. “The champ eats corn, that’s what the champ does.”

“Maybe we need to sit down and eat a bunch of creamed corn,” Ryan says, cooking up an idea for a video to promote F.A.M.E. “We would swim in that shit.”

Prater looks up from his phone. “I’m so down to swim in creamed corn.”

Alison Miller is a freelance writer in Athens, Georgia, and second-year student of the Narrative Nonfiction MFA program at the University of Georgia. 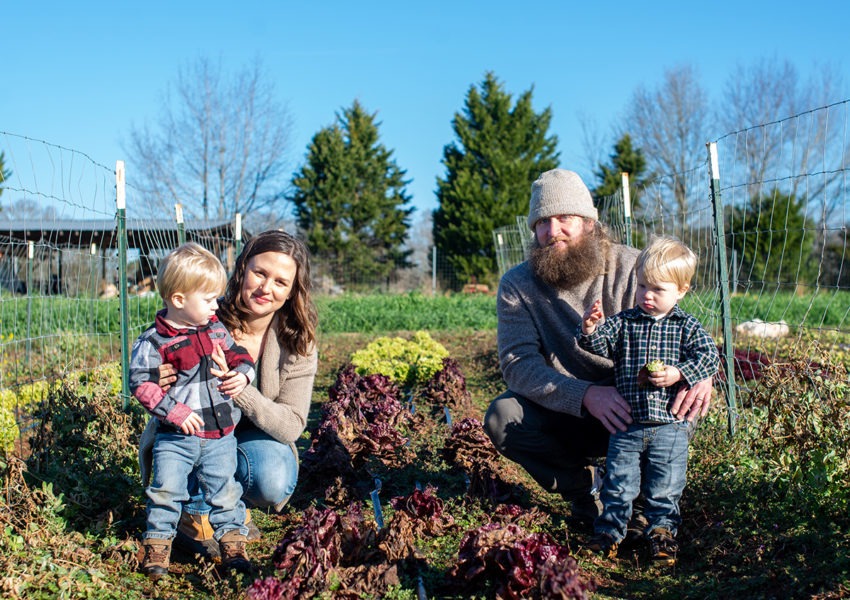 The Battle of Shoal Creek Farms

An Athens, Georgia, neighborhood says “not in my backyard” to an organic farm. 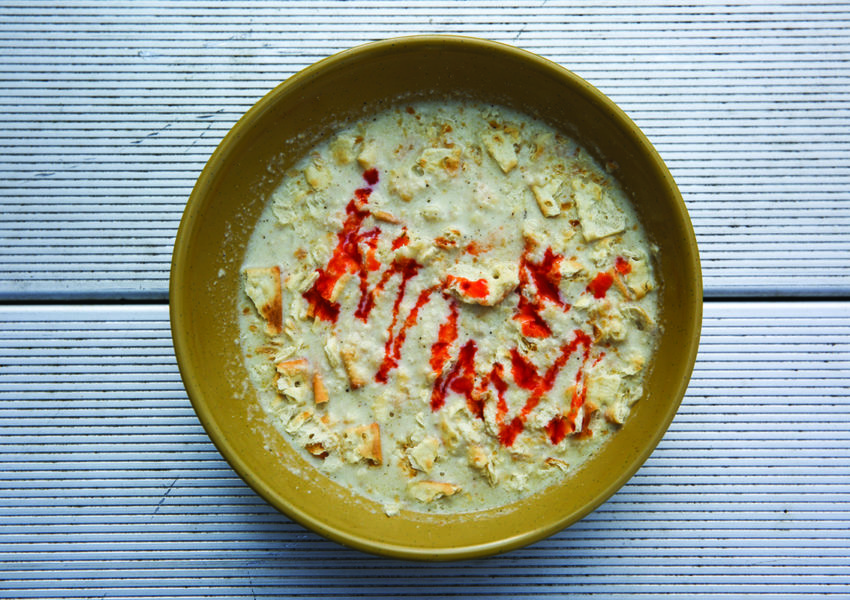 Stir From the Bottom

In the late 1960s, Gene Seagraves began cooking chicken mull to raise money for church. Now it's the stuff of legend. 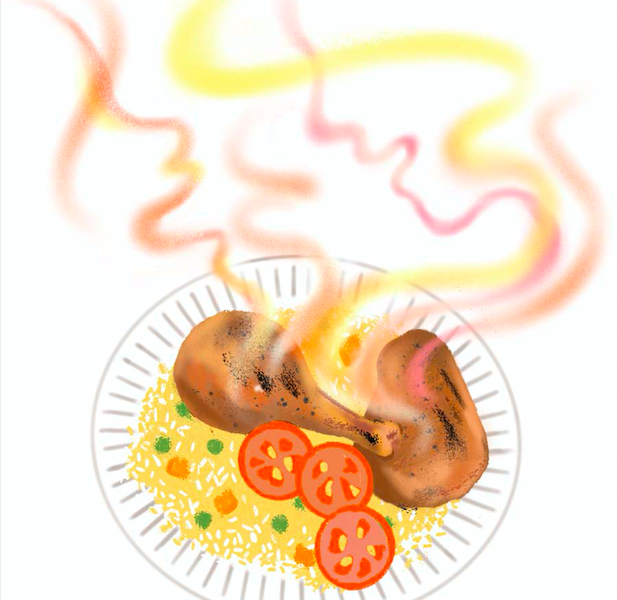