It was Frank Stewart’s memory that led us to Hawkins Grill that May night in 1993. As a boy, growing up in Memphis, he had eaten barbecue at that small, unheralded place. All those years later, the flavor of the place lingered in his memory.

The sandwiches we would eat that night at Hawkins Grill would be the first of many we would ingest in the course of preparing our book, Smokestack Lightning: Adventures in the Heart of Barbecue Country. It was an unfortunate beginning, in a way. J.C. Hardaway, the pitmaster at Hawkins Grill, would come to represent for me and for many the ultimate in barbecue mastery. Little did we know that biting into those sandwiches we would put ourselves on a long and disappointing road. We tasted barbecue all over this vast country of ours. None of it was better than what we ate that night at Hawkins Grill. J.C.’s was a meticulous method.

Sitting on a hot grill, there was a pork shoulder wrapped in aluminum foil. As Al Green or Albert King or Frankie Beverly played on the jukebox, J.C. cut a few slices and set them to warm on the grill. On the same grill, he toasted the hamburger buns. While the meat cooked, he splashed them with barbecue sauce from an old Palmolive dish detergent bottle. The meat was then placed on a worn chopping board, chopped with a dull clever, placed on the toasted bun, topped with a mayonnaise-based coleslaw, cut in half, stuck with a toothpick, and served.

It was a sandwich like that one that led me to write, “In J.C. Hardaway, the shoulder sandwich has discovered its Stradivarius.” The sentiment was not mine alone. J.C. was the only chef invited to cook twice at the Southern Foodways Alliance’s annual symposium. There is no more exacting audience for American food than that crowd. He wowed them as he did everyone.

You would think that in Memphis, Tennessee, a barbecue crazed town, that a man like J.C. Hardaway would be a local legend, right up there with B.B. King and Elvis Presley. But truth be told, he worked in relatively obscurity, known only by the folks in the neighborhood and the few serious connoisseurs who sought him out near the corner of Bellview and McLemore. The local food critics didn’t know him. And even at Hawkins, his genius wasn’t appreciated. The owners sold the place and the new owners deluded themselves into thinking they could cook as well as J.C. The business died while J.C. moved around the corner to the Big S Grill, where he completed his career.

Little by little he came to be more widely known. He was mentioned in magazine articles, and in his hometown newspaper. He was honored with the Keeper of the Flame award by the Southern Foodways Alliance, and his fans even had t-shirts and business cards printed up for him. But the end was bittersweet. Years of standing up 12 hours a day, cooking, serving, and cleaning took its toll. His advanced age and failing health made it difficult for him to fully enjoy the accolades that were his in later life.

But when those many midnights turned to mornings and when the small aisle of Hawkins was filled with dancers and there were as many empty quart beer bottles on the bar as there were full ones left in the cooler, what emerged on the plate from J.C. Hardaway’s cramped kitchen was as much about nostalgia as it was about food. The taste of his sandwiches invoked the ancestors. And as you ate at Hawkins, the nostalgic details of your own biography in food played in your mind, while you chewed with an intense silence.

So it is fitting now that for the happy few who knew J.C. and his genius, he has become a legend. An ancestor. And years from now, when we are that much further from his era and its culinary ideals, we will still conjure that flavor in our mouth’s memory and smile. 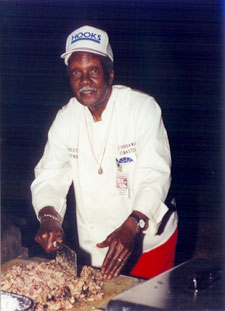