Born in Cullman, Alabama, some fifty years ago, Frank Stitt has, over the course of a life in the kitchen, set national standards for culinary excellence. He has won a plethora of awards including the James Beard Foundation’s Best Chef in the Southeast citation. He has birthed four restaurants – Highlands Bar and Grill, Chez Fonfon, Bottega, and Bottega Café — in one Birmingham neighborhood, making the Southside of that town one of the region’s undisputed dining destinations. Recently he wrote a book, an homage to Southern cookery, filtered though his various peregrinations and sundry passions, Frank Stitt’s Southern Table: Recipes and Gracious Traditions from Highlands Bar and Grill.

Along with his wife, Pardis Stitt (who is also a founding member of the SFA), Frank has earned a reputation for impeccable food, even worldly food, and yet, nearly every dish that issues from their kitchens owes a profound debt to the place of his birth, the state of Alabama.

He grew up small town. Frank’s mother was a devotee of the New York Times Cookbook (written by another Southerner, Craig Claiborne). His father, a doctor, was a dedicated patron of America’s best restaurants: Antoine’s, the Four Seasons, the list goes on.

Frank’s maternal grandparents provided a tether to the land, to the cycles of agriculture. His grandmother churned her own milk for butter. His grandfather tended a smokehouse and won awards for his proficiency with row crops.

After high school, Frank left the South. Many of his generation departed in search of themselves, in search of a respite from the strife that defined the region. Tufts University in Boston came first. Then the University of California at Berkeley where, inspired by his reading of Richard Olney and Elizabeth David, he sought a kitchen job. Eventually he found his way to Alice Waters’ Chez Panisse. And from there to a position, in France, working as Richard Olney’s assistant.

While in France, Stitt had what he terms “an Alabama epiphany,” a realization that much of what he valued in French life could be found in his native Southland. It may have been lying dormant, but it was there. And the tethers to his family and personal history were so strong that he could no longer deny the pull.

In November of 1982 Frank opened a restaurant, Highlands Bar and Grill, in Birmingham. A goodly bit of the start up capital came from his mother’s decision to mortgage her home. And a goodly bit of the success came from how Frank managed to marry French techniques and sensibilities (and wine!) with Alabama cooks and Alabama provender.

Witness white bean and collard green gratin, pink-eye pea hand cakes, roast rack of pork with corn pudding, or squab with redeye gravy. Better yet, book a table at Highlands and taste those dishes – and you’ll know just how fluid the boundaries are between France and Alabama, at least in this man’s kitchen.

Out of that kitchen have come his inheritors. People like Verba Ford, his longtime right-hand woman, and Drew Robinson, his longtime sous chef. And Chris Hastings. And a good three dozen or so other folks who, inspired by Frank and Pardis, have since made their marks in our nation’s kitchen.

Sitting at table in one of Frank and Pardis’s restaurants you come face to face with the deep and profound commitment to the place they call home. They recognize their region as a flawed place with a picaresque history. And yet they embrace their roles as ambassadors of a better Alabama, an Alabama that begins at a table where black and white, old South doyenne and New South immigrant, might gather to butter cornbread and pass around the bounty of our region’s farmers, artisans, and chefs.

In recognition of Frank Stitt’s commitment to the study and practice of Southern foodways, and acknowledging that 2007 will mark both the 10th symposium of the Southern Foodways Alliance and the 10th anniversary of the inaugural meal Frank cooked for this group – pig ears in a mustard sauce, fresh dug new potatoes and asparagus in a ham hock vinaigrette – we ask Lynn Tolley, great grand-niece of Jack Daniel himself, to step up and present this portrait, painted by Blair Hobbs of Oxford. 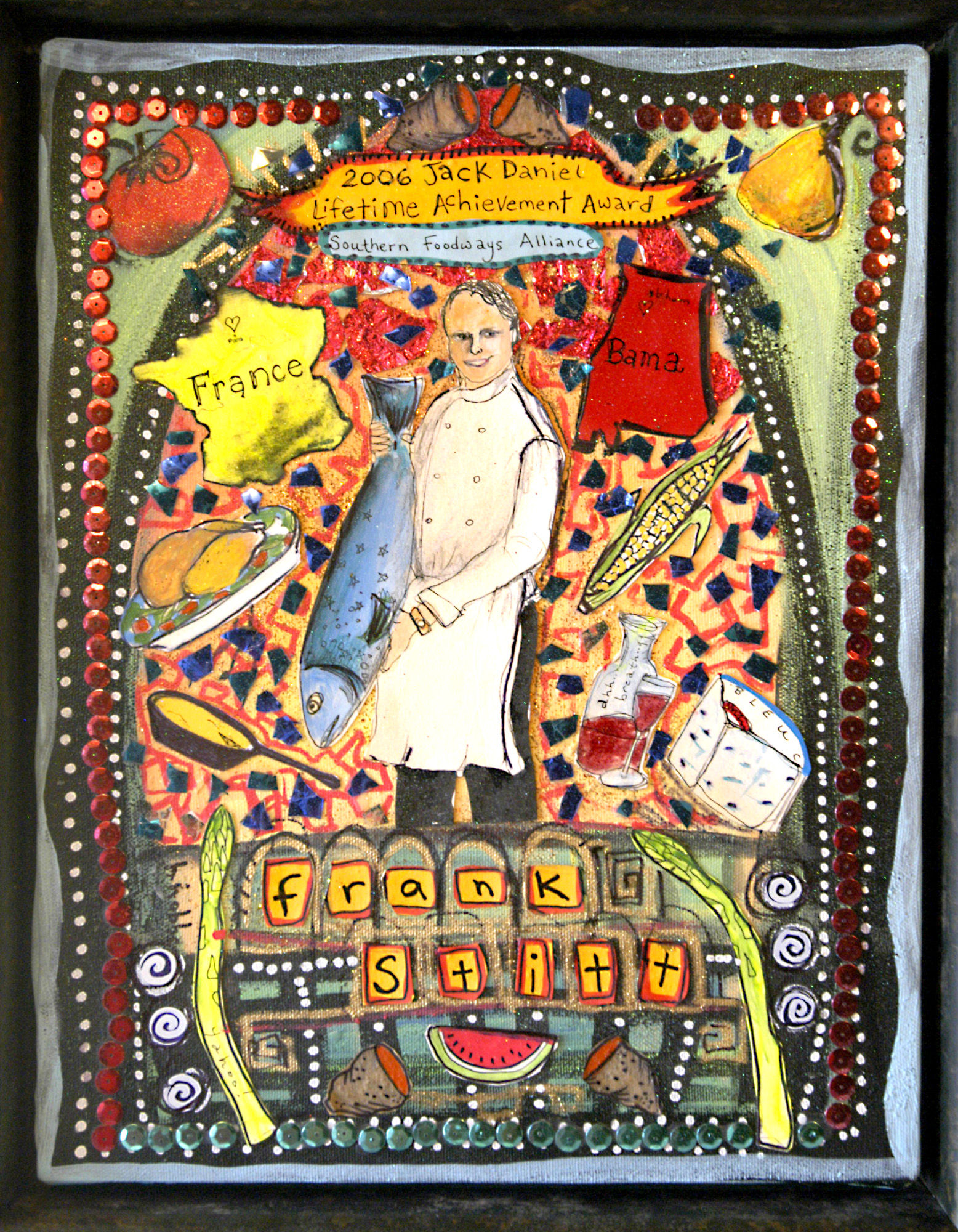