Ella Brennan, matriarch of one of the most prominent restaurant families in South, was born in New Orleans, Louisiana, on 27 November 1925. At the age of 19, Ella Brennan began working with her brother, Owen Brennan, who had purchased a restaurant in the French Quarter. Instead of opting for college, Ella Brennan went to Europe where she made a study of restaurant service, and New York, where she worked briefly at the 21 Club.

Brennan’s, the seminal family restaurant, specialized in French Creole dishes, served, contrary to expectations, by a family of Irish descent. It is still operated by a branch of the family. In the interim, Brennan’s has birthed a number of inheritors including far-flung restaurants in Houston, Texas, and, as operated by Dickie Brennan, as close as around the corner.

At Commander’s Palace, the Victorian mansion in Uptown New Orleans, operated by the  family since 1974, Ella Brennan serves what she calls Haute Creole cuisine—the sophisticated cooking of old Creole New Orleans, reinterpreted for the modern palate.

Over the course of her career Brennan has exhibited a reputation for recognizing and developing restaurant talent. Among the now famous graduates of her kitchen are Paul Prudhomme, who arrived in 1975, and Emeril Lagasse, who began his service in 1983. What’s more, Brennan has worked with farmers and fishermen to cultivate local markets for their goods and provide her restaurants with the best possible ingredients.  In her role as restaurateur, she has promoted the sociability of dining and the art of conversation. As the twentieth-first century dawned, a new generation of the Brennan family, led by Ti Martin and Lally Brennan, has stepped into the spotlight at Commander’s, intent upon upholding the standards Ella Brennan set.

– Scott Simmons for the New Encyclopedia of Southern Culture 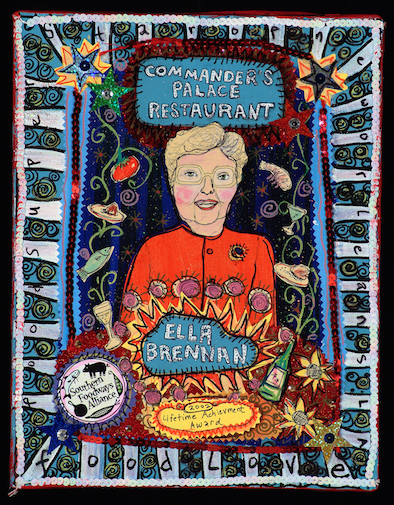