Every couple of months, a controversy about Mexican cuisine requires me to grab my refried hammer of vengeance. I am, after all, the author of Taco USA: How Mexican Food Conquered America. Defending the cuisine’s honor is my lifelong duty. I leave no combo plate behind.

It’s a fun cross to bear. In the past, I’ve called out celebrity chef Rick Bayless for saying he was going to introduce “authentic” Mexican flavors to Southern California by consulting on a Los Angeles restaurant, when the truth is there’s been “authentic” Mexican in SoCal ever since we were a part of Mexico. I trashed Austin, Texas, for their claim that the city invented the cult of the breakfast taco—it actually came from muy Mexican South Texas. When Donald Trump Tweeted a picture of himself enjoying a taco bowl, I pointed out that the dish was popularized in Disneyland by Mexican workers in the 1950s.

So imagine my excitement this summer when I learned that San Diego Padres first baseman Wil Myers had told a reporter, “I’ve said this on a couple occasions, and people get really mad at me. I enjoy East Coast Mexican food a little better. Yeah, wow. I grew up on it. That’s just what my taste is, but there’s nothing wrong with San Diego Mexican food.”

The barbs came swiftly, not just from angry San Diego residents, who believe, like many other cities in los Estados Unidos, that their Mexican food is the best. Fans of Mexican food nationwide also blasted Myers, incredulous that someone, anyone, could declare Mexican food on the East Coast better than in the Southwest. As I read the blowback, I was impressed: Finally, Americans rush to the defense of Mexican honor!

I readied my ire and began researching Myers. (I’m a Chicago Cubs fan, and the Padres haven’t mattered to me since the days of Tony Gwynn.) But I had to stop before I could begin my swing. Turns out Myers isn’t a blue-blooded Boston Brahmin or a wise-guy New Yorker. He’s a Southerner—a Tar Heel, specifically. When the twenty-five-year-old native of Thomasville, North Carolina, talked about growing up enjoying East Coast Mexican food, he really meant Southern Mexican food.

The casual reader might shrug at the distinction, and I get it: Mexican food in the South still isn’t up to the level of West Coast Mexican or any other Mexican, really. The Southwest has a 250-year head start on South-Mex; Easterners can boast of the many immigrants from the state of Puebla who have enlivened New York’s food scene. The South? Despite recent gains, the region’s Mexican restaurants are mostly stuck in a Tex-Mex menu circa 1991. Its biggest contribution to the U.S.’s Mexican food scene is the tostaguac, which is little more than a guacamole taco.

But Myers shouldn’t be pilloried for his remarks; he should be hailed for them. He represents a fundamental change happening in the South right now: A generation is growing up with Mexican food and embracing it not as something exotic and foreign, but as part of who they are as Southerners. And that’s an important indicator of the South’s continued embrace of Latinos.

A generation is growing up with Mexican food and embracing it as part of who they are as Southerners.

To be a Southern Californian nowadays, as I am, is to eat Mexican food from cradle to grave. That means everyone can claim the cuisine and never feel a sense of guilt about appropriation—how can you, when it’s part of your mother’s milk?

Eating the cuisines of other cultures hardwires people for the better. Demonizing ethnic food is one of the first things that dominant cultures do to mark minorities as Other. Back when my mom, aunts, and uncles immigrated to Orange County, California, in the 1960s, white people ate Mexican food. But they didn’t consider it—or the Mexicans who made it—American.

But if you are raised with tacos and enchiladas as regular sustenance, it makes it that much easier to embrace Mexicans as friends, neighbors, classmates, and spouses. And relationships like that have made Southern California a far better place for Mexicans.

The South is now taking the first steps toward achieving such a reality. No region of the United States has experienced a larger proportional increase in its Latino population over the past twenty years. And Wil Myers’s home state of North Carolina has absorbed more Latino immigrants than almost any other state. According to the University of North Carolina’s Carolina Population Center, there were about 845,000 Latinos living in the Tar Heel State in 2012 out of a total population of about 10 million—this, from a population of just over 76,000 in 1990. Only Florida and Georgia have bigger Latino communities in el Sur.

Data compiled by the Pew Hispanic Center showed only 602 Latinos lived in Myers’s native Davidson County in 1990, the year he was born. By 2011, that number was 10,550, 6 percent of the county’s population. But the 2010 U.S. census pegs them as 14.4 percent of Thomasville’s population, meaning Myers grew up in a town twice as Latino as the rest of Davidson County, and more Latino than the rest of the state. So while his parents’ generation dealt with Latinos as newcomers, Myers would have gone to school with them, and probably even played baseball with the children of immigrants and second-generation Latinos drawn to the area’s manufacturing industries and proximity to the Winston-Salem/Greensboro/High Point Triad area.

His pride in the state’s Mexican food has a strong basis in reality. Stats compiled by the Institute for Mexicans Abroad show that the majority of talones de brea (Tar Heels) come from Hidalgo, Veracruz, Guerrero, and Oaxaca. These states all have proud culinary traditions: slow-roasted barbacoa estilo Hidalgo, Veracruz’s famous fish stews, Guerrero’s awesome take on huevos rancheros called aporreado, and Oaxacan moles. The restaurants of Myers’ youth were most likely in the hands of people who knew good cooking. Even if these restaurateurs made the business decision to serve crowd-pleasing nachos rather than Oaxacan tamales, we at least know that Myers was eating respectable grub.

Myers’s pride in his hometown Mexican food is significant. The cuisine is now part of his Southern identity, and makes it easier for millennials like him to join their Latino peers in shaping the bright future of the region.

So, congrats, young Wil Myers: America might have ridiculed you for your food choices. And I still think that San Diego Mexican food offers more than what North Carolina has. (Have you tried the seafood at Mariscos German?) But you were brave to announce something that more people need to realize: Carne asada tacos are now as Southern as biscuits and gravy, whether people want to believe it or not. 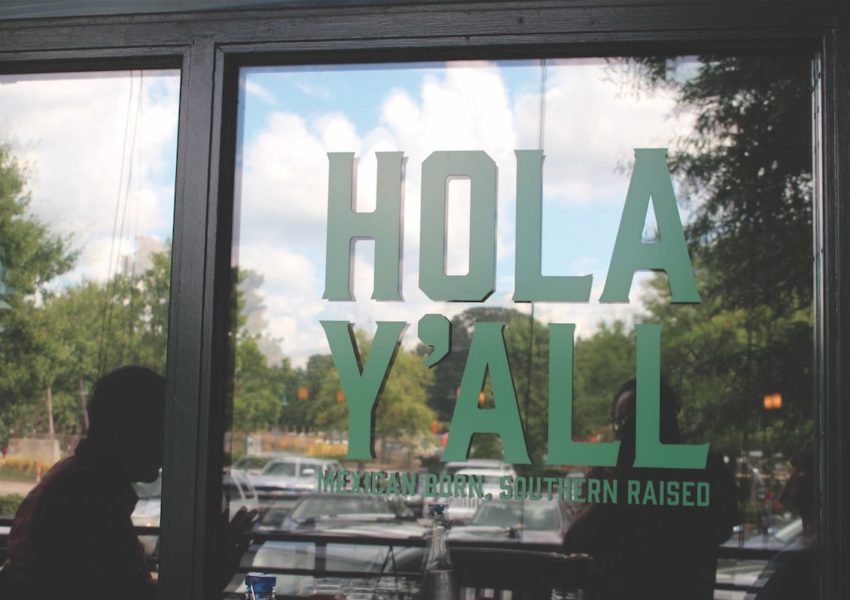