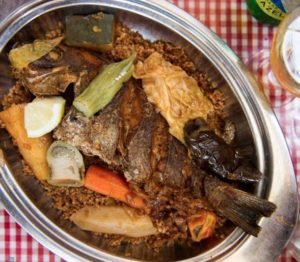 This excerpt was originally printed in Senegal: Modern Senegalese Recipes from the Source to the Bowl by Pierre Thiam and Jennifer Sit (Lake Isle Press, 2015).

This is the one dish that unites all Senegalese. Thiebou jenn, our national dish, is served daily in many Senegalese households, each with their own special recipe. Though very traditional, no Senegalese cookbook would be complete without a thiebou jenn recipe. This version calls for certain ingredients that may not be accessible in many Western markets, but that shouldn’t discourage you, as Vietnamese or Thai fish sauce is a good substitute that will bring the fermented flavor characteristic of thiebou jenn.

The selection of root vegetables to be used is up to you. Traditionally thioff, a very popular fish in Senegal, is used in thiebou jenn, but any firm-fleshed fish such as grouper, sea bass, haddock, or halibut will work. If you have your fishmonger cut your whole fish into steaks, make sure you keep the head and tail to add to the pot. There are many different ways to prepare thiebou jenn and this is a slightly more traditional version than the recipe in my first cookbook, Yolele!.

1 large whole thioff or grouper (about 5 pounds), scaled, gutted, and cut into 7 steaks about 1½ inches thick, reserving the head and tail

1 yuca (4 to 5 inches long), peeled and cut into large chunks

If you can’t find guedj and yeet, substitute with Vietnamese or Thai fish sauce, using about a total of 1/4 to 1/2 cup, to taste.

Cut two 2-inch-long slits into the meaty part of each fish steak. Stuff each slit with about 1 teaspoon of the rof. Place the fish, including the head and tail, in a shallow bowl or baking dish and coat with the remaining rof. Cover and refrigerate until needed.

Heat the vegetable oil in a large pot over medium-high heat. Add 2 pinches of salt, the onions, green pepper, and tomato paste. Reduce the heat to low and stir well. Stirring occasionally to avoid scorching, cook for 10 to 15 minutes, until the vegetables are soft and the tomato paste turns a dark orange. (You may need to add 1 to 2 tablespoons water to further prevent scorching.)

Add the water and stir well. The paste will thin out and become sauce-like. Return to a boil, reduce the heat, and simmer for about 30 minutes, until the oil separates and rises to the surface.

Carefully add the fish steaks, including the head and tail, along with the hibiscus (if using), Scotch bonnets, and a pinch of black pepper. Cook uncovered over medium heat for about 15 minutes, until the fish is cooked.

Carefully remove the fish and set aside in a large bowl. Cover and keep warm. Add the guedj and yeet (or 1/4 to 1/2 cup fish sauce) to the pot. Partially cover the pot, leaving the lid ajar, and simmer for 10 minutes.

Add the cabbage, turnip, eggplant halves, squash, yuca, carrots, and bitter eggplants (if using). Return to a boil and season with salt and pepper. Reduce the heat and simmer for another 20 minutes. Add the okra and cook for 10 more minutes, until the vegetables are tender.

Remove the vegetables and place in the bowl of fish. Add a few ladles of broth and the tamarind.

Line a large colander with cheesecloth and add the washed rice. Place over the simmering broth and cover. Let steam for 10 to 15 minutes.

Add the rice to the broth and give it a big stir. Bring to a boil, then reduce the heat to low. Use a ladle to skim the excess oil from the top; discard the oil. There should be just enough broth to cover the rice; if not, remove the excess broth with the ladle. Tightly cover with a lid and cook until the rice is tender and the liquid absorbed, about 20 minutes.

When the rice is finished, arrange the rice on a large platter. Scrape the crust from the bottom of the pot and place in a bowl to be served on the side. Arrange the fish and vegetables in the center of the rice. Serve with lime wedges.

Place all the ingredients in a food processor and pulse until coarse, or pound in a mortar with a pestle.