To become a part of the fabric of SFA, members say you must have your heart and your head in the right place and adopt the inclusive and giving spirit that is SFA’s lifeblood.

That may mean helping organize events, booking tables at fundraiser dinners, attending festivals where SFA films are screened, showing up for author signings when SFA members publish books, or simply staying active in the SFA calendar of events.

People don’t—or shouldn’t—join SFA to generate business. But that’s often a byproduct of being active in the organization. SFA members are quick to refer business to each other, call on each other for recommendations, or ask for help. It’s a trusted and vetted network of people who have already passed muster with other respected members.

Asha Gomez once ran a luxury spa business in Atlanta that also served healthy meals as part of the experience. It folded during the 2008-09 financial crisis, but clients kept talking about the terrific food. When she opened a restaurant called Cardamom Hill, her mother’s fried chicken was a bestseller.

An invitation to cook at the SFA’s 2013 Fall Symposium made her a nervous wreck, until friend and fellow SFA member Anne Quatrano of Bacchanalia and Star Provisions in Atlanta offered to help. Among other dishes, Gomez cooked chicken country captain, a curry dish served with rice that has roots in her native India and has long been popular in her adopted Georgia.

“You walk into a room and 400 people get to their feet and give you thunderous applause and these are the best food people in the Southeast,” Gomez said. “That moment was so powerful. It gave me wings and confidence. It was one of the best moments of my career.”

The following summer, Gomez closed Cardamom Hill at the height of its popularity. The stress of running a restaurant wasn’t a good fit. She refocused her energy on a new concept, The Third Space, a kitchen and event space that she rents for corporate teambuilding events. Other chefs often rent it to work on recipes or do photo shoots. Twice a month, Gomez hosts pop-up dinners that typically sell out within minutes. 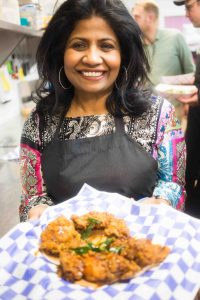 Profit margins at The Third Space are many times higher than they were at Cardamom Hill, Gomez says. Her new business affords Gomez time to travel with her young son, work on another cookbook, and advocate for causes such as microloans that will empower women in developing countries to breed livestock or grow gardens to end hunger.

“I want people, especially women, to know that there is an alternative model to opening a full-blown restaurant,” Gomez said. “It’s not good for us to get bogged down by unsustainable models.”

Steven Satterfield, an SFA member and chef of Miller Union in Atlanta, recently rented The Third Space and hired Mosier of Placemat Productions to style food and shoot photos for his new cookbook. That interconnectedness often pumps revenue from one business to another within the SFA network, which is another enormous benefit for members.

Sean Wilson, the president of Fullsteam Brewing in Durham, North Carolina, got his SFA start pouring sample batches of beer at a Fall Symposium. When someone jokingly plucked a sprig of basil during a party at Edge’s house and stuck it in a can of suds, he discovered how well that herb pairs with certain beers. Fullsteam’s Southern Basil Farmhouse Ale is now a bestseller. Media mentions of the brewery have risen more than threefold since 2010, from about 20 articles per year to 70 or more in recent years.

Ann Marshall and Scott Blackwell of High Wire Distilling say SFA led them to Glenn Roberts of Anson Mills, who casually suggested they try making whiskey with an old strain of corn that was popular with moonshiners. Jimmy Red Corn was nearly extinct, but SFA donor Anson Mills helped them find access to seed.

Turns out it’s a great grain for whiskey, with a nutty flavor and creamy mouthfeel. Their Jimmy Red whiskey is a runaway hit that sells out almost immediately, and has been written about by NPR, Wine & Spirits magazine, and the Houston Chronicle , among others. They’ve debated whether to release all of it to meet demand, or hold some back to age longer and develop a more complex flavor. They’re doing the latter. Marshall and Blackwell have made SFA friends so quickly and readily that they often host SFA houseguests even when they’re out of town. They call their spare room the Gravy Boat.

“We consider it a family reunion. We do business with a number of people there now, but we don’t take our business cards with us,” Marshall says of the Fall Symposium and of the social networks they have grown. “Its success lies in its authenticity. People do things organically, because it’s right or they’re passionate about it. Not because they’re gaining financial success from it.”

Another example of the SFA revenue cycle is White Oak Pastures in the south Georgia town of Bluffton. Will Harris inherited the 150-year-old family farm after it had been conventionally managed for several decades with insecticides, antibiotics, and other invasive methods common in today’s industrialized food system.

He converted the entire 3,000+ acres into a natural and holistically run operation. Animals don’t receive hormone implants or sub-therapeutic antibiotics, and they aren’t artificially inseminated. Instead of herbicides, ground cover crops help keep down weeds. Harris affectionately calls his cattle athletes, and they are noticeably leaner and more muscular than feedlot animals who are fed corn and soy. White Oak Pastures sells beef at Whole Foods, Publix, Kroger, and other stores, where it costs 50-75% more than the cellophane-wrapped styrofoam packaged store brands of unknown provenance.

White Oak Pastures meat appears on menus across the South, including Bacchanalia, Restaurant Eugene and Miller Union in Atlanta; and Poole’s Diner in Raleigh, North Carolina. All are run by fellow SFA members. Harris says Edge, Mosier, and others in SFA helped him think of White Oak Pastures as a premium producer of humanely raised protein on a holistic and regenerative farm rather than a livestock operation.

In 2009, SFA produced a short film about Harris called Cud, which Whole Foods screened in stores across the nation and has also been screened at festivals across the country. Since that film debuted, media coverage of White Oak Pastures has increased fivefold and the farm is regularly featured in dozens of articles per year in publications such as The New York Times Magazine, The Washington Post, Forbes, and Bloomberg News. White Oak does more than $20 million in revenue per year and has 150 employees as of mid-2018, Harris says. That’s up from about $1 million a year in the early 2000s when the farm had just three employees and was 1,000 acres.

“We wouldn’t be where we are today if not for the favorable press over the last 15 years, and that video,” Harris says. SFA has “given me a lot of enlightenment, helped me figure out how this Southern food system works. It’s given me insight on how to view the world.”