April Grayson: Could you tell me your whole name and the name of your business?

Ok. Do you mind telling me what year you were born?

Ok. Wow, that’s great. How long have you been in business here?

Do y’all run it together?

You’re his wife. And what’s your name?

So have you been in the same spot the whole time?

Ok. And had you run a barbeque business before this, or was this your first time?

SD: I worked up there at the next place, the barbeque place up there at the motel. My brother-in-law used to run that up there, and it was sold, and this was his grocery store right there. And the motel was sold, he decided he wanted to fix a barbeque, and I had been telling him about building a concrete pit up there.

Hello. Come on in.

SD: Building a pit up there. And he come back from work one day, he’s talking about, can you make one? I said yeah. And I built a pit for him out there. … I built it out there. And then they built a big building over it, you see. 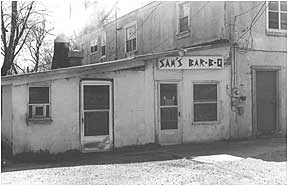 Oh ok. So even when he owned it, you built the pit for it?

Great. So who taught you how to barbeque?

SD: Well, it’s just something that I picked up?

How young were you when you started?

SD: I retired from the …arsenal at 65, and see I worked for him some a bit at the motel, and just through, just taking your time and learn how to cook.

So just watching your brother-in-law and over the years you picked it up.

Ok, so was this something that your family did when you were growing up? Did you cook a whole hog barbeque or anything like that?

Ok. So what do you cook here now?

Shoulders. Now do you use wood or electric, or how do you cook it?

Oak and hickory. Where do you get your wood?

SD: Sawmills, sawmills down there in Hardeman County, back down through that a way.

Ok. And where do you get your hogs, your shoulders?

SD: Dalton’s, over at Jackson.

Ok, ok. Do you have a specialty here that you serve or is it pretty much—?

SD: Sandwiches. The pound and the whole shoulders, just whichever way they want it.

SD: I used to. I used to cook them, turkey and everything. But see, Father Time has put a governor on me. [Laughs] So I had to drop that all. Round a holiday, something like that, they’d have turkeys laying all around for me to cook. It was just too much work on me. See, I’m 83 years old, and it’s just so much you can do. 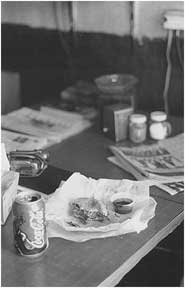 Yes, sir. So how many days a week are you open now?

Were you, at one time were you open more than that?

SD: Yeah, one time I was open five and a half days a week.

Ok. Do you still have a lot of your regular customers come in on the days you’re open?

SD: They come, they come, yeah. They come. Some had come in and they’ll get it and carry it, carry it to New York—they carry it everywhere.

Uh-huh, well that’s good. Well, what about your sauce? Do y’all make your own sauce?

Do you have a hot and mild?

And do you serve any sides? Slaw or beans or potato salad or anything?

Well that’s good. What do you think makes your barbeque distinctive from other people’s?

How long do you cook a shoulder for before it’s done?

MD: All day and all night.

SD: I put it on, let’s say this morning, and tomorrow sometime I’ll take it up and put on some more.

Ok. Well, have you changed anything about your recipe or cooking process since 1988 when you opened?

SD: It’s the same old way, same old way. Now lots of ‘em is gone to the electric, you know. Something like that because, you know, it ain’t a lot of work in it. The old-fashioned way, you still get the same good barbeque.

So do you ever consider doing the electric ‘cause it’s easier, or you just—?

SD: It’s easier, but it’s lots different than the—

MD: It tastes different. You don’t get that hickory smoke taste.

So you think as long as you keep doing this, you’ll just keep doing it the same way then?

MD: Yeah, as long as he’s cooking, in business, he will cook it the same way, with wood.

Now do you help him cook some?

MD: No, he does the cooking himself.

And you kind of run the business part of it.

MD: Um-hmm. And serve. And the cash register. 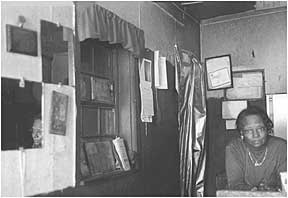 MD: We have four children, sixteen grands, and five great-grands. And two of ‘em said they might take it over. One daughter and one granddaughter said they may. We don’t know. Our son knows the business. He used to work here with us, but I doubt if he’ll come back. He’s a minister in Atlanta. But who knows? We don’t know.

Wow. So this is pretty much your life then, huh?

SD: Now my brother-in-law used to run the place up here at the motel up here. And when I started to cooking for him, he had one little pit. When I quit him, we had two pits…facing each other. And they had both of ‘em running. And then we’d, sometimes we’d run out of meat.

So about how many people do you serve on the days that you’re open? Do you know?

MD: It varies. More on Fridays and Saturdays. And on holidays—Fourth of July and all that—people are all out there across the street lining up. We sell out sometimes at 11, 12:00. ‘Cause they buy whole shoulders.

Wow. So how many other barbeque places are there in this town here, Humboldt?

SD: It’s one right up the street here.

MD: Right up the street.

MD: Uh-huh. Now there might be some more out there.

So have a lot of your customers been coming here for years? Have the regular customers.

MD: We have new ones all the time, regulars and new ones.

From local and everywhere else?

MD: From everywhere. We have people who come here and take meat back to over in Canada. Detroit. Texas.

How do they find out about it? Drive by?

MD: I guess word of mouth. They found us.

SD: Now my sauce is mine. There was a guy come in here one time, in business with his brother-in-law, and he wanted me to sell him some. I said, “Well, I don’t make that much. I just make so much.” And I let him have a bottle of it, you know, and when he come back, he come in the door, and he says “Now, I want a gallon of this sauce,” And he says, “Here’s the money right here. Here’s the money right here, here’s $200.” 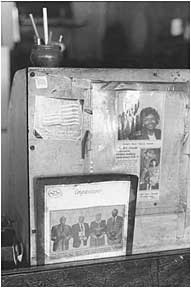 Wow. Is it a vinegar-based sauce?

If that works, that’s great, huh?

…[exchange with a customer who wanted to remain anonymous but claims Sam’s barbeque is the best.]…

Do you ever do barbeque contests?

MD: He figured he wouldn’t win. No, he has never.

Never. Most people say they don’t have time for contests.

SD: Before Father Time put a governor on me, it was a restaurant out on the other side of town, and I used to cook for him.

What was the name of that?

MD: The restaurant he was talking about.

SD: I used do the cooking, and he would come get his meat every week.

SD: Now he used to have a place when he started there, where I’d cook maybe 60 or 70 pounds for him, you know. And then he finally got a cooker that he uses himself out there. But he comes here and gets barbeque. How many did he get this morning?

MD: He got nine sandwiches.

SD: Yeah. He got nine. He comes just about every day and gets some sandwiches here.

Does he eat them all himself? [Laughs]

Does he eat all nine himself?

MD: No, I imagine it’s for the people that work with him.

MD: They have a little get together maybe.

Well, do you see yourself fitting into a tradition around here of barbeque? When you grew up, were people doing this, a similar kind of barbeque?

SD: It used to be people a long time ago that had barbeque. Lots of ‘em would have a pit dug out there, and they’d put stuff…and cook. Now there was a man here who used to sell, they called it pig sandwich. Well, now, the way he would do—he had to use ham. He’d put the ham in an oven or stove and bake it, and then he had a thing, oh about as big around as over here, and they’d put charcoals in there. And put them hams on there and let the grease drop down on the charcoal. Well that would put a flavor in it. Now people thought he was cooking on that, but where he cook it was in the oven or the stove, and he’d put it on there to smoke it.

MD: The people around Henderson do, too, have big barbeque.

SD: Yeah, around Henderson, they have down there.

We’ve interviewed a few people in that Henderson area. Well, do y’all have anything else to say about barbeque?

MD: No, I sure don’t. Except, unless it’s cooked by wood, it’s not good barbeque.

Great. Well, thank y’all so much. 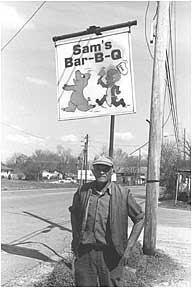