Eighty-four year old M.T. Fuller recalls living near his father’s Georgia grist mill until the Great Depression forced his family to move to a farm in Carroll County. In great detail Fuller can describe his sister’s undergoing the proper kitchen training and the specific steps they took each morning to get the family’s meals underway. Biscuits, cornbread, cakes, and variations of sweet potato pie were all staples in the Fuller household diet during the 1930s. The family farm often produced the ingredients needed to cook and bake, however when times were hard and money scarce, many families including the Fuller’s found ways to improvise. Seasonal availability and special events often dictated the Fuller menu, but M.T. remembers the female members of his family baking and mixing meals with ease, without the aide of a measuring cup or spoon. According to M.T. Fuller, the “old-fashioned” methods of cooking have gradually given way to more modern traditions, and although it might be easier to make frozen biscuits or purchase a cake at the bakery, the homemade version has and will always yield a “better flavor.” 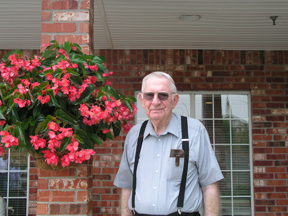 Well, we had two kinds of potato [pie], from sweet potatoes. You had a potato custard. And then you had a potato pie; it was a deep-panned pie. Uh, that’s where they cut the potatoes up and, uh, put in a pan, oh, probably three inches deep. And then they, uh, had a concoction with those potatoes with butter and sugar and maybe vanilla flavoring and so on. And then they rolled out a crust to pot on top of that, and it was cooked in an old wood stove. And, uh, that was a good pie. ~ Matthew Fuller