It starts about ten in the morning, although the early risers get there around seven or eight to start preparing. The early morning temperature on the Saturday between Christmas and New Years varies from cold to cool in Hamilton County, Florida—just across the state line below Valdosta.

There is much to be done before lunchtime at the annual Murphy Cane Grinding, starting with grilling

the locally famous Driggers and Sons sausage and scrambling eggs for breakfast for the cooks and helpers.

Before the day is done over 200 pounds of pork loin and sausage will be grilled, 120 gallons of cane syrup will be cooked and bottled and over 150 relatives and friends will partake of the bounty and fellowship inside the packhouse and under the syrup shed at the Murphy farm.

The tradition was revived about thirty years ago by Edward Murphy, who passed away in 1999, but traces its roots back over 100 years. Then most of the larger farms cut and ground sugar cane, cooked it down to syrup, and bottled or sold the product.

“Cane grinding and syrup making would last about a week,” according to Mildred Murphy, who has lived on the farm since she came as a bride in 1947. Toward the end of the week, neighbors would come and bring covered dishes and socialize. Most of the larger farms would have cane grindings and mostly close neighbors would join in because of the difficulty of travel then.

Edward Murphy, whose father started the Murphy farm in the late 1800’s, modernized the mule-drawn mill and wood-fired cooking operation in the late 1970’s according to Jimmy Murphy, oldest son who now, with brother Kevin, run

s the farm. The original Winship and Sons No. 14 mill has been modified to accept tractor power rather than mule power.

“Daddy and Uncle Cecil (Gornto) cooked a hog out here one night, got to talking about old times and decided that night to start the Cane Grinding again,” he says. Now, with mother Mildred, Kevin and brother Stanley, sister Brenda and their families the revival has grown from “twenty or so” to over 100 people enjoying the hospitality annually.

A wagon full of sugar cane is brought to the back of the syrup shed and fed into the double drum mill where the juice is squeezed into a five gallon tub covered with cheesecloth to catch the solid materials. This juice is transferred to a sixty gallon cast iron syrup kettle where it is cooked several hours to the proper thickness, then bottled by hand for friends and relatives to take home.

The concrete kettle holder on which the heavy, four foot diameter kettle sits now has a propane burner underneath for boiling the syrup so two batches can be made in one day rather than just one when wood heat was used.

unteers feed the mill, stir the syrup and skim the top all day long while eating and talking with relatives, friends and neighbors who are sometimes only seen once a year.

At lunchtime, the blessing is given and the delicious grilled pork, sausage and all the covered dishes are served in the packhouse, then taken outside to picnic tables or tailgates of the many pickup trucks parked around the cooking area.

The packhouse is where the tobacco, grown on the farm until about four years ago, was strung onto sticks for drying in barns and then brought back and untied and packed for shipment to the auction. The house has been used for storage until two years ago when the idea originated to restore it—on the inside anyway.

Lumber was stored inside that had been milled from trees on the farm. It was removed, cleaned of nails and splits and milled to make paneling to line the inside walls. Enough was left over for a set of base and wall cabinets. Plum

bing was added and a wonderful meeting and greeting place was created—or saved.

The packhouse, built around 1950 of wood from the original farmhouse (built around 1891) looks the same from the outside now as it did before renovation, which was the idea. Most of the work was done by the family, who trace their roots on this same farm back to the mid-1800’s.

After lunch, the fun begins. Touch football, skeet shooting and hide-and-seek break out spontaneously and simultaneously. In addition, cracklings are cooked for snacking or bagging to take home for cornbread.

Around two o’clock the first kettle of syrup is ready. Pans of biscuits appear as if by magic and syrup is poured into plates for sopping or holes are simply poked into the biscuits and filled with the syrup.

Children also gather at the syrup kettle to claim the candy or “polecat” which forms on the kettle rim as the syrup thickens. The candy is scraped off the kettle with peeling from cane stalks and eaten like suckers.

Throughout the afternoon, it’s more of the same. Socializing, skeet, football, running, jumping but mostly eating.

Around dark, the second batch of syrup is about ready and many folks begin to leave. Dishes are claimed, leftovers are wrapped for lunch tomorrow and plans and promises are made to “see you next year.”

After dark a bonfire is lit, there are fireworks and music and dancing for a core group of family who live nearby or are staying the night, and friends and neighbors. Around midnight the final goodbyes are spoken and there are hugs all around.

Another Cane Grinding has been a success. 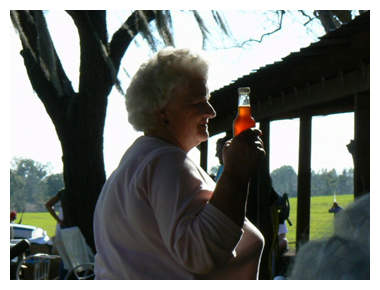 Daddy and Uncle Cecil (Gornto) cooked a hog out here one night, got to talking about old times and decided that night to start the Cane Grinding again. ~ Edward Murphy