Fred Sauceman: Explain the tests that are going on here in the lab.

What do you mean by Brix?

Explain how the name originated.

The name originated in 1926. Trader George Lee Wainscott had come up with a flavor that he liked and is what we know now as Ale-8-One, but he didn’t know a name for it. He had a contest at a county fair in 1926 for everyone to submit what they thought would be a good name for the new product. The winning entry was from a young girl—I think she was 14, but there are different accounts of the age—who submitted “a late one” as the latest thing in soft drinks, and he punned that down to the play on words, Ale, dash, eight, dash, one. And that’s what it’s stayed ever since. The company itself was founded in 1902, and then in 1926, Ale-8-One, our main product, was launched, and it’s focused around Ale-8 ever since.

The product was called Wainscott’s flavors. There were several different flavors of those, and Roxa-Kola, a cola soft drink, was named after Mr. Wainscott’s wife. And those were phased out in the years after Ale-8-One was created, because Ale-8-One sales outgrew the other products.

For someone who has never tasted the product, how do you describe the taste of Ale-8-One?

Didn’t I read on the Web site that the flavor originated in Northern Europe?

Mr. Wainscott designed his flavor from studies in Northern Europe for different soft drinks, ginger-based soft drinks. That was what he wanted to create, and then he tweaked those formulas to Ale-8, which is the same formula we’re using today, since 1926, since Mr. Wainscott’s original formula.

Tell me how it’s sold.

Why have you stayed with the returnable bottles?

Customer demand. The returnable bottles still make up about a quarter of our sales through this plant. The customers really like the bottle. There’s a 30-cent deposit on

And you still pack them in wooden crates?

Yes, we still use wooden shells to pack the 12-ounce returnable bottle.

What are some things people do with the drink? Is it ever used as a mixer, for example? Is it used in recipes?

People are free to do with it what they like. I personally like to mix it with Maker’s Mark. I think it mixes well with Bourbon. I cook with it. Our family uses Ale-8 in our family chili recipe, and I think dad even used to put it in waffles and French toast batter. But you can put it in pretty much anything and it tastes good.

Tell me more about the chili.

We really take a normal chili recipe with ground sausage, ground beef, beans, and then any time we have cans with either beans or tomato paste, or tomato sauce, we just rinse the cans out with Ale-8 and then pour it in the chili pot and simmer it down.

What effect does that have on the taste of the chili?

It just gives it a different kind of flavor that you wouldn’t normally expect with chili. I think the ginger cooks in there really well. I think it’s really, really good.

You told me that soldiers are drinking it in Iraq?

We ship Ale-8 anywhere in the world via UPS. We have Internet sales on Ale-8-one.com, and people all over the world will order Ale-8, and right now we’re sending quite a few cases per month to troops in Afghanistan and Iraq.

Go over the family relationships.

Give me an idea of how much product comes out of this facility.

We sell about a million and a half cases a year, 288-ounce cases.

What do people tell you about this product? Why are they committed to it, loyal to it?

I think it’s really just the actual flavor of the product. I think that’s what’s carried us through as long as we’ve been around, and that’s what makes it popular.

What have I not asked you that you’d like to talk about?

Well, we’ve recently come out with Diet Ale-8, in 2003. We’d gotten a lot of requests from a lot of people to bring out a diet version of Ale-8, and it wasn’t until 2003 that we’d found the artificial sweeteners that we thought would simulate the sugar sweetness most closely to regular Ale-8. And so we formulated a lot of different kinds of varieties of Diet Ale-8 and then finally picked one that we think was the best and the most like regular Ale-8 and then rolled that out in 2003, and that’s what we have today. Diet Ale-8’s our first new product in many, many years. And it’s gone over pretty well. I think it’s the best diet soft drink out there.

Again, go over the ways it can be purchased if you’re not in the distribution area.

So it’s possible that I could start seeing it in Tennessee?

And you can go on the web site and order it?

Yes. And anybody’s that’s wanting to be able to buy Ale-8 in their stores, I would suggest contact the store or contact your local Coke, Pepsi, or other soft drink distributor, and we can talk to them about opening up new markets.

You were talking in the plant about how clean the water is that you use. Take me through, briefly, the process you use to cleanse the water.

We take a lot of pride in the quality of the Ale-8 we produce, so we have a very, very strict quality control procedure on all of our products, and we do a lot of plant maintenance and a lot of quality control checks to make sure the Ale-8 is the best Ale-8 we can make, and part of that is starting with very pure water. We use a system that super-chlorinates the water to kill anything that might be in the city water that we get. Then we use a system to pull out, it creates a flock that settles through the water, pulling out any particles from the water, and then that’s fed through various different sizes of food-grade gravel and sand to pull out any particles that could be left, and then that’s fed through an activated carbon tower which pulls out any impurities. It gets rid of any chlorine and gets rid of any chemical tastes in the water. And then that’s fed through a filter element of very small size, I think one micron filter element. And then that’s cleansed and put into the actual filling machine to bottle our Ale-8s.

Back to the flavor: That is natural ginger?

It’s pure ginger extract that we get from one of our suppliers that is made specifically for us. 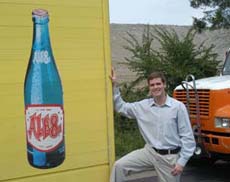 People are free to do with it what they like. I personally like to mix it with Maker’s Mark. I think it mixes well with Bourbon. I cook with it. Our family uses Ale-8 in our family chili recipe, and I think dad even used to put it in waffles and French toast batter. But you can put it in pretty much anything and it tastes good. ~ Fielding A. Rogers