These photos were taken at an annual hog slaughtering held at Ronald Lawson’s farm in Short Mountain community near Woodbury, Tennessee, in January 2003.  Since these photos were taken, this annual tradition has ceased.  In preceding years, the day began the process of butchering and curing enough meat for its participants and their families to subsist for the year.  These men slaughtered these hogs in order to preserve a centuries-old, once common farming tradition that has largely disappeared.  But there were other reasons for continuing this tradition. These men practiced an economical way of feeding their families while economically using almost every part of every animal slaughtered. The hogs were bought at eighty to ninety pounds for thirty cents per pound and then raised on the farm to three hundred pounds.  These men also practiced their own quality control on the food they ate by raising the hogs on corn and feed they provided.  This guaranteed them high quality, hormone-free meat.

With the exception of a few modern conveniences (backhoe, .22 rifle) the slaughtering process remained the same as it had been for hundreds of years.  On Ronald Lawson’s farm, hog killing comes on the first cold day of the year so while curing, the meat remained cool and insect-free during the cold winter months. Lawson and his friends butchered six hogs that day.  All hogs were killed and completely processed on an individual basis, to keep the meat as fresh as possible. A .22 rifle was used to put the hogs down with a minimum of suffering.  They were shot behind the ear, and fell immediately. Immediately afterward, the hog’s carotid artery was stuck with a narrow, long butcher knife, to empty the body of blood.  The hog was then hamstrung and a steel rod run through both hind tendons.  Using the backhoe, the hog was then lifted and carried to the scalding box.  The box is a trough filled with water under which a fire is built. The water is heated to approximately 140 degrees.  One participant tested the heat by drawing his index and middle finger the length of the box, through the water. Based on the time he was able to keep his fingers submerged, he claimed the water was a perfect temperature.

Hogs are covered with hair.  The purpose of the scalding box is to heat the hog so that the hair can be pulled out and scraped off with a minimum of effort. This is a tricky process.  When the hog is placed in the box he is rolled to insure even heating. When done correctly, the hair loosened.  If heated too long, the hair would set in the follicle, making the scraping and pulling more difficult.  Once the hog was scalded, it was removed to the scraping table beside the scalding box. While scraping, certain parts of the hog were covered by burlap to hold the heat close to the body. Several times that day, the process of soaking, pulling, and scraping was repeated twice to insure all the hair was removed.

The newly cleaned hog was again raised by the backhoe and hung so that it could be eviscerated. This process is called gutting and requires steady precision and a sharp knife.  First the head was removed.  An incision was made from the throat back to the spine. The head was then twisted off and saved aside for later use.  Next a gutting knife was used to make a long incision from the crotch to the base of the neck, while taking care not to nick or cut the vital organs held within.  The small intestines were severed from the body and the organs come out enclosed neatly in a membrane. A tub placed below the hog was used to collect the organs. Many internal organs (heart, liver, lungs) were saved and later prepared and eaten. The head was halved along the jaw line and saved to be boiled with spices and vinegar to make souse.  The feet were saved.  At this point the remaining blood was rinsed from the body cavity.  The hog was then ready to be butchered. The participants left the hogs whole to cool over night. The next day the men would butcher the hogs and cure in salt (referred to as sugar) the cuts of meat that would eventually be smoked.

Photo Captions (from the top):

2) A hog, recently shot and stuck is carried by the backhoe to the scalding pit.  The chains draped over the pit enable the men to turn the body in the water, insuring even heating.

3) A hog after scalding. The burlap covering helps to keep the heat close to the body so the hair is easier to remove for a longer period of time.

4) The men set about the hog and pull and scrape its hair with hands and dull knives. Dull knives prevent lacerations on the skin. This process takes twenty to thirty minutes and at its end, the hog is mostly smooth skinned.

5) The head is removed from the body using a knife to cut through the neck to the spinal cord and finally separated with a vigorous twist.  Very little of the hog is wasted and the snout, ears, and skin are used in the preparation of souse.

6) A hog prepared to be butchered.

7) An inside refrigerator reveals heads and feet to be used at a later time.

Information for this writing was gathered from The Foxfire Book, by Eliot Wigginton and His Students, personal interviews, and conversations with Larry Sanders. 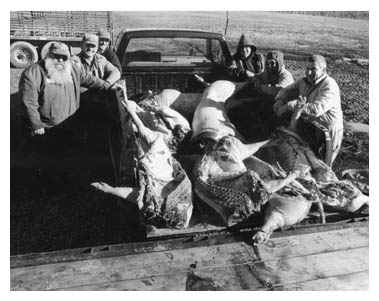