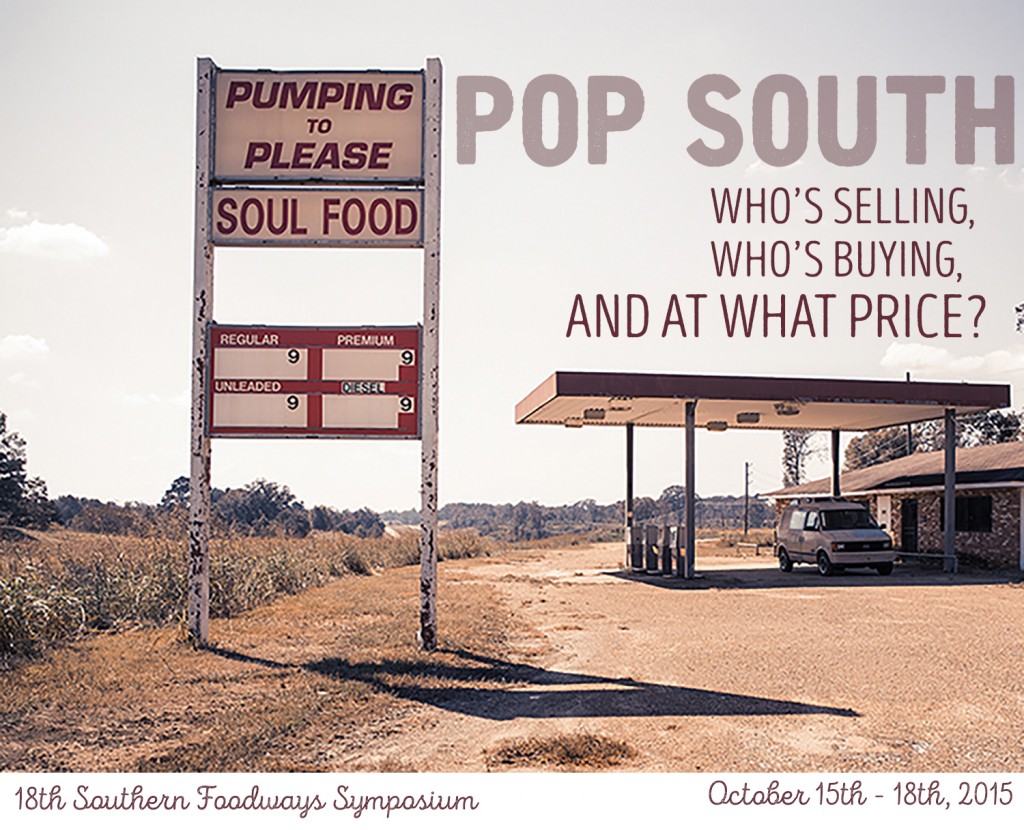 The Southern Foodways Alliance stages its 18th fall Symposium October 15–18 on the campus of the University of Mississippi and in and around the town of Oxford. Onsite registration for ticket holders begins on Thursday at 2:00 p.m. NEW THIS YEAR IS A SOUTHERN STUDIES FANTASY CAMP ON THURSDAY FROM 3:00 to 5:00. Sunday morning at 11:00, the Symposium closes, when we send you packing with a Pappy Meal for the road.

Our 18th Symposium explores the Pop South. Charles Reagan Wilson explains the relationship between the South and pop culture this way: Popular culture is mass produced. It connects tradition and modernity and produces common symbols and icons that represent the region. SFA looks closely at these pop themes and symbols and asks questions about performance and authenticity. We explore the South of tourism and souvenirs. We study how the South is packaged and sold.

All year, we have documented and studied pop culture. This weekend, we share what we learned. We talk of slug burgers and poverty-engendered creativity. We screen a new film on Bill Neal, the man who introduced shrimp and grits to restaurant kitchens. We celebrate Ruth Fertel Keeper of the Flame Phila Hach of Nashville, who cooked for the United Nations and served as chef in residence for the World’s Fair. And we toast Craig Claiborne Lifetime Achievement Award winner JoAnn Clevenger of Upperline Restaurant in New Orleans.

Speakers include Alice Randall, who talks of the fried chicken empires built by Minnie Pearl and Mahalia Jackson. Gabe Bullard muses on the mason jar. Monique Truong samples Southern, American, and Vietnamese identities. And Mashama Bailey, Sean Brock, Kim Floresca, and a raft of other chefs cook their hearts out. Sunday concludes with an SFA original commission, focused in part on White Trash Cooking, framed by Edward Lee, composed by Price Walden, performed by the Donkey Sauce Players, and elaborated by the mysterious MASKED AVENGER.

Host for the Symposium is the Southern Foodways Alliance, an institute of the Center for the Study of Southern Culture at the University of Mississippi. Generous corporations, foundations, and individuals fund our work.

Blackberry Farm Taste of the South

Order of the Ossabaw

Order of the Okra

Order of the Scuppernong

The mission of the Southern Foodways Alliance it is to document, study, and celebrate the diverse food cultures of the changing American South. We set a common table where black and white, rich and poor—all who gather—may consider our history and our future in a spirit of reconciliation.