I’m on the fence.

“This is why we shouldn’t depend on customers to subsidize servers’ salaries.”

Tori De Leone had just totaled her take-home tips from a slow brunch shift at Saint Leo restaurant in Oxford, Mississippi, where she waited tables while attending graduate school at the University of Mississippi (and where I still pick up shifts).

Tori and I have often joked that we are basically the same person, despite the dozen years between us. Here, our opinions diverged.

I love making tips. In two decades of serving in diners, fast-casual chains, and fine-dining restaurants across the South, I’ve never met a server who didn’t.

Tori grew up in Oregon, one of seven states that guarantees tipped employees the same minimum wage as hourly workers. She served lunches and brunches at Saint Leo, whereas I usually worked the busier night shifts. In New York, she’d worked as a barista at Maialino, Danny Meyer’s Gramercy Park trattoria.

“No tipping was actually a huge selling point for me there,” she told me.

In 2015, Meyer’s Union Square Hospitality Group (USHG) began the years-long process of integrating a “Hospitality Included” model into each of its restaurants. The company raised menu prices to include gratuity and used the additional revenue to pay servers, bartenders, bussers, and runners a steady, competitive wage. Under this model, Union Square offers substantial employee benefits, including paid time off, medical, dental, and vision insurance, and a 401(k) with company match.

Meyer was not the first to implement a nontraditional pay structure at his restaurants; Alice Waters, for instance, eliminated tipping at Chez Panisse in 1989. In an era of both celebrity chef-dom and Twitter activism, Meyer’s announcement kicked off a debate that has since been fueled by movements lobbying for a single minimum wage for all workers, most notably in Washington, DC, and New York.

A one-wage system offers stability to employees who traditionally work for tips, and it can help balance other inequalities in the industry. 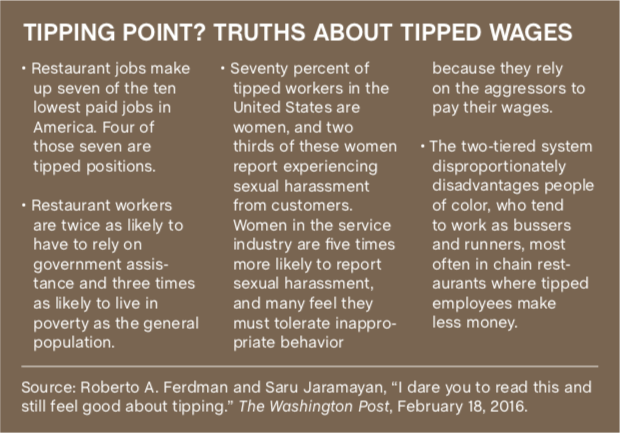 In an interview with The Washington Post, activist Saru Jayaraman explains that, post-abolition, white employers used tipping to hire newly freed slaves for next to nothing. Today, restaurants overwhelmingly hire people of color for lower-level positions like food runners and bussers, while offering white employees more lucrative positions as servers and bartenders.

Restaurant Opportunities Center United, which Jayaraman co-directs, reports that women suffer sexual harassment from customers—sexual teasing, remarks, pinching, touching, and pressure for dates—at twice the rate of their male counterparts. Opponents of tipping argue that women feel obligated to tolerate these behaviors for the sake of making a good tip, and they do not trust their employers to defend them.

Then there’s kitchen labor. On gameday in a college town, for example, many servers and bartenders leave with hundreds of dollars. The kitchen staff, who crank out plate after meticulous plate for eight hours with hardly two minutes for a break, see no notable difference on their biweekly check. To keep down labor costs, managers often deny overtime in the kitchen. Servers, meanwhile, can pick up shifts for extra cash.

Today, only one USHG restaurant remains to be converted to the Hospitality Included program, and all remain successful.

I applaud employers like Meyer who reject the status quo in favor of fairness. Would I work at those restaurants? Absolutely not.

Experiments like Meyer’s (and dozens of restaurants that followed suit) counter the common belief that restaurants could not afford to operate if they paid their tipped employees a full wage. Tori urged me to question that assumption, shrugging, “There are still restaurants in Oregon and Washington.”

Still, the move to abolish a two-tier wage system has gained little traction nationally. Rather than ideological, the reasons appear to be legal, economic, and cultural.

In the South, a lack of unions weakens workers’ ability to organize and lobby for change; meanwhile, national activist organizations on both sides concentrate their efforts on fights in bluer regions of the country like DC, California, Michigan, and New York.

The wealth disparity between the South and those regions matters. Emily Blount, who owns Saint Leo and the newly opened Saint Leo Lounge, regularly dined at Gramercy Tavern when she lived in New York. She based her business model around Meyer’s principles of “enlightened hospitality” but stopped short of a one-wage system. “I’ve gone to [USHG] restaurants and seen a $20 cocktail,” she explained. No one in Oxford, Mississippi, would pay that for a drink.

Perhaps the biggest challenge in any setting, though, is how servers themselves feel about tipping. Meyer lost about 40 percent of his staff in the months after he implemented his “hospitality included” model. Those who left were mostly longtime front-of-house employees.

Logic and ethics convince me that I should oppose our current tipping system. I applaud employers like Meyer who reject the status quo in favor of fairness.

Would I work at those restaurants? Absolutely not.

This paradox left me conflicted enough to consult my friend Taariq David. A poet and a thinker, Taariq has worked every position from dishwasher to general manager.

We meet for a beer at the Blind Pig, the closest thing Oxford has to a dive bar. From 4 p.m. until last call, restaurant folks filter in and out of the poorly lit, basement-level retreat to play pool and blow off steam over PBRs and shots of Jameson. Unbuttoned white and blue Oxford shirts dot the crowd as hospitality employees wind down from or gear up for shifts around the Square.

Over a couple of beers, Taariq and I agree that a single-wage system would eliminate the disparity in income between servers and kitchen staff. I would love never to hear another cook tell me, “You literally made $200 tonight for walking food from one end of the restaurant to the other while we’re back here busting our asses.” He would love for the most essential person in any restaurant, the dishwasher, to earn a wage that reflects his value.

We agree that tipped employees deserve healthcare, sick leave, and a predictable income; that the tipping system makes women more vulnerable to sexual harassment; that it almost always favors white employees over people of color.

We order another round when Delantric Hunt, a nine-year veteran of the Oxford service industry, settles in the booth with us, still in his bar apron from his last shift. I ask De’s opinion on a no-tipping model. He belly-laughs. “Oh, hell, no! They can pry my tips from my cold, dead hands.”

A fellow server toasts to this. “Give me my cash tips, or give me death!” We raise our beers, tap them on the table, and drink in solidarity.

“It’s hard to replace that immediate return on sweat equity.”

Over the next hour or so, more long-term industry employees stop by our table to say hi or share a drink. Each acknowledges the inequities of the current system before admitting they’d much rather earn tips than an hourly wage.

“The problem is,” Taariq shakes his head, “it’s hard to replace that immediate return on sweat equity.”

Another server-turned-manager nods, “The thrill of getting that big tip for a job well done is a driving force for those who work well in the service industry.”

That’s just it: We know the system is rigged, and we take pride in navigating it to our advantage. We discern whether a party wants a chatty server or one who slips to and from the table unacknowledged. We feel out if a couple requires all the details of the special or just a gloss-over. We oblige, and we make our nut.

When you live check to check or work multiple jobs, as so many servers do, that autonomy means everything. We know, deep down, that it’s an illusion. But it helps us keep going.

We know that, in the long-term, finding a job that offers health insurance and paid leave and a retirement plan is smarter than chasing a wad of cash after a killer service. Maybe someday we’ll demand change. When we do, it will be because we choose to, not because Twitter told us we should. Until then, we’ll take the tips.

Jenna Mason, who has twenty years of experience in the restaurant industry, is SFA’s content and media manager. 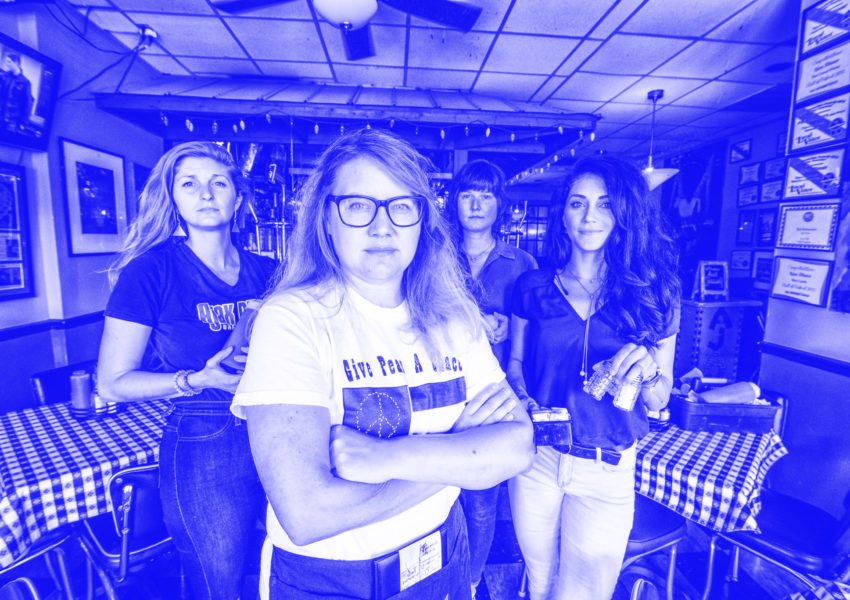 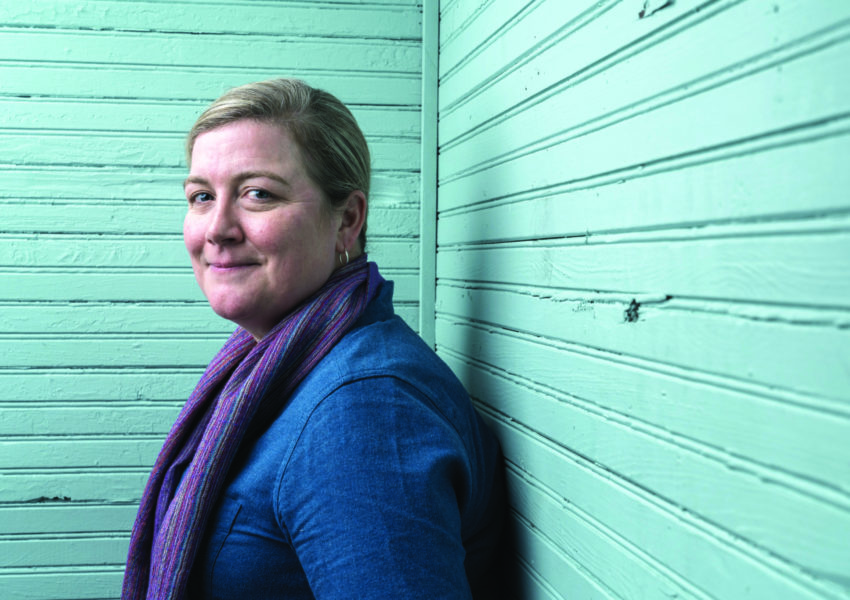 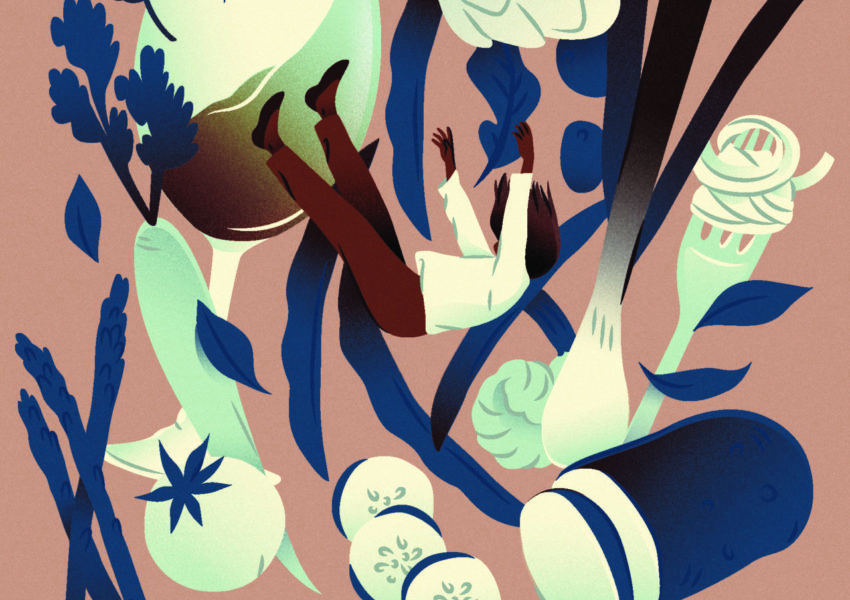 Serving and Being Served

If you’re in the weeds, ask for help.