by Rebecca Lauck Cleary, with illustrations by Katy Clune 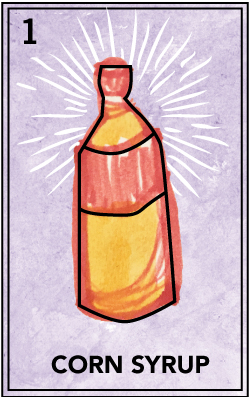 A food syrup made from the starch of corn, containing varying amounts of maltose and higher oligosaccharides. Corn syrup, known as glucose syrup to confectioners, is used in foods to soften texture, add volume, prevent crystallization of sugar, and enhance flavor. Corn syrup is distinct from high-fructose corn syrup, which is manufactured from corn syrup by converting a large proportion of its glucose into fructose into using the enzyme thus producing a sweeter compound 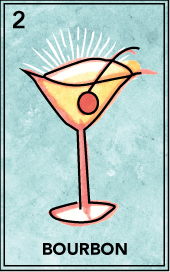 Contrary to popular belief, bourbon does not have to be made in Kentucky. Most of it is made there. Two companies were allowed to distill bourbon during Prohibition for “medicinal purposes.” Congress declared bourbon America’s “native spirit” in 1964. 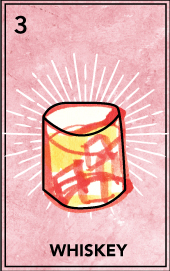 American Whiskeys are a broad category, usually made with corn, rye, barley, or wheat, and aged in oak barrels. 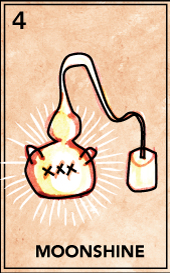 While it was technically any illegally produced spirit, moonshine is now most often associated with corn whiskey and is now legally available for purchase from dozens of distilleries 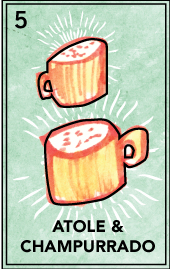 Much like moonshine and whiskey, atole and champurrado are mother and daughter. Atole is made by boiling masa down with water, adding cinnamon, piloncillo (unrefined brown sugar), and vanilla. Champurrado adds chocolate. Both are piping-hot, sweet, and savory. 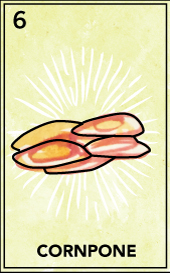 Native Americans made cornbread with a paste of crushed green corn kernels, and from a batter made by adding water and animal fat to cornmeal. A thin paste made flatter cakes, resulting in something more like a cornmeal pancake. A thicker batter resulted in a bread dough, shaped by hand into loaves for baking. 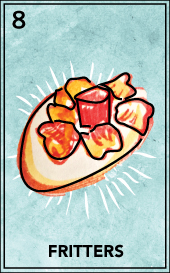 Name applied to a wide variety of fried foods, usually consisting of batter or breading, filled with bits of meat, seafood, fruit, or other ingredients. 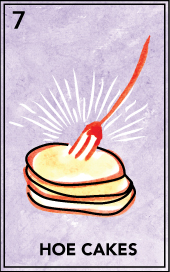 Reflecting a particular method of cornbread preparation, made when dough is baked in the field over a fire atop a hoe. 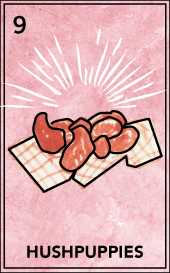 The hushpuppy may have originated as a scrap of cornmeal dough, fried quickly and fed to dogs to silence whining or begging. 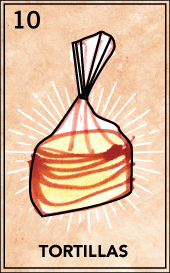 A thin, round, unleavened bread prepared from cornmeal or sometimes wheat flour, baked on a flat plate of iron, earthenware, or the like.

CORN TO THE GRINDSTONE 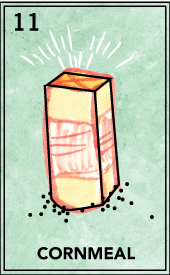 A meal ground from dried maize in fine, medium, and coarse consistencies, but not as fine as flour. 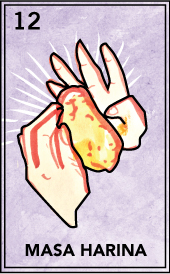 Masa harina is a very finely ground corn flour made from corn that’s dried, cooked in water with slaked lime (which gives it distinctive flavor), ground, and dried again. Mixed with water (or sometimes oil), it forms the dough called “masa” that is used to make corn tortillas.

ALL WRAPPED UP IN CORN 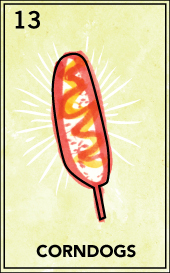 A sausage coated in a thick layer of cornmeal batter on a stick. 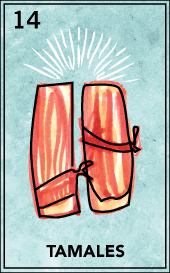 A traditional Mesoamerican dish made of masa, steamed in a corn husk or banana leaf. Tamales can be filled with meats, cheeses, fruits, vegetables, or chilies, according to taste. Both the filling and the cooking liquid may be seasoned. Mississippi Delta tamales are smaller than Latin-style tamales, are simmered instead of steamed, have a gritty texture from the use of corn meal instead of masa harina, and are usually served with juice that is the byproduct of simmering. 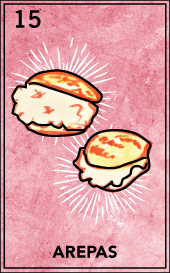 Arepas are prominent in the cuisine of Colombia and Venezuela. Basically a cornmeal patty, stuffed with savory ingredients such as meat, beans, cheese, and vegetables. 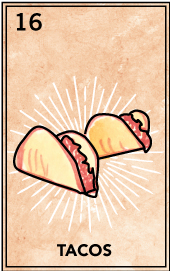 Composed of a corn or wheat tortilla folded or rolled around a filling. 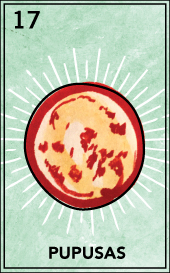 From the homes and streets of El Salvador, pupusas are thick handmade tortillas, filled with meat, cheese, and beans, served with a side of curtido (pickled cabbage and carrots), and tomato salsa. 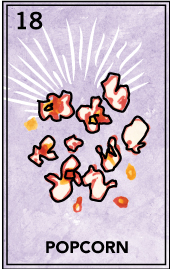 Any of several varieties of corn whose kernels burst open and puff when subjected to dry heat. 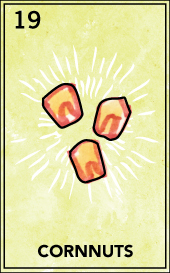 Made infamous, perhaps, by the scene in the 1989 dark comedy “Heathers” as the last words of Heather Chandler, cornnuts, also known as toasted corn or corn bits, are a snack food, made of roasted or deep-fried corn kernels. In South America, including Peru and Colombia, it is referred to as cancha. 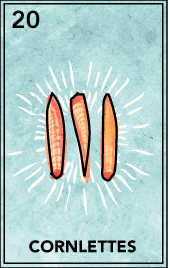 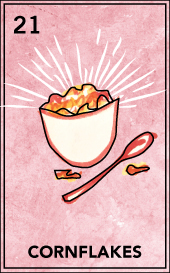 A popular breakfast cereal made by toasting flakes of corn. The cereal was first created by Dr. John Harvey Kellogg in 1894 as a food that he thought would be healthy for the patients of the Battle Creek Sanitarium in Michigan, where he was superintendent. The breakfast cereal proved popular among the patients, and the Kellogg Company set up to produce corn flakes for a wider public. A patent for the process was granted in 1896. 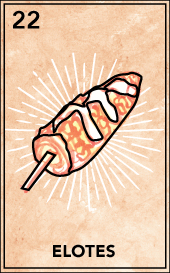 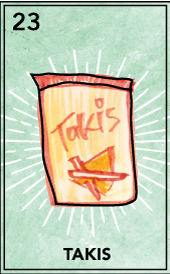 Takis are essentially the mestizo child of Fritos and Cheetos, but with more spice, tang, and bite, found at your neighborhood convenience store.

CORN BY THE SPOONFULL 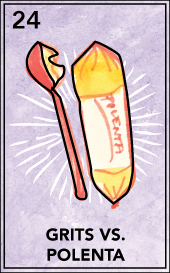 Both grits and polenta are made from stone-ground cornmeal, say Glenn Roberts. “Southern grits and Italian polenta are traditionally made from two vastly different types of corn. How many times it’s milled and the fineness of the grind also differ. And then there’s the taste and texture.” 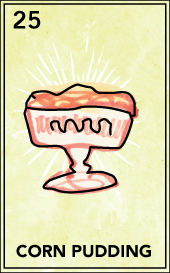 To English colonists, cornmeal batters were reminiscent of what they called puddings. Colonists baked cornmeal puddings in crusts like pies or boiled them in bags. These “hasty puddings” required no stirring. A single batter could yield porridge (or “mush”) and bread. 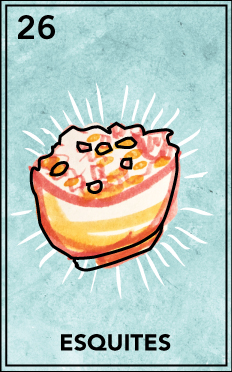 Related to elotes, this dish is little changed since the time of the Aztecs. Served in a cup instead of on the cob, it’s made with roasted kernels, onions, butter, and epazote. 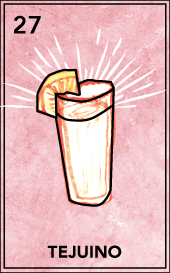 Tejuino starts as an atole. Cooks let the drink ferment, cut the results with piloncillo and salt, then serve it chilled with a scoop of lime ice cream. It’s like kombucha, except better: funky, tangy, irresistibly sweet. 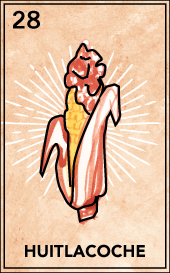 Pronounced whee-tla-KO-cheh, huitlacoche is also known as corn mushroom, corn smut, or Mexican truffle. It is a fungus, which randomly grows on  corn that has not been sprayed with any fungicide. It develops on ears as they ripen after rain. Huitlacoche will consume corn kernels and push through the corn shucks .

Rebecca Lauck Cleary is a second-year Southern Studies master’s student at the University of Mississippi and a senior staff assistant and website administrator at the Center for the Study of Southern Culture. 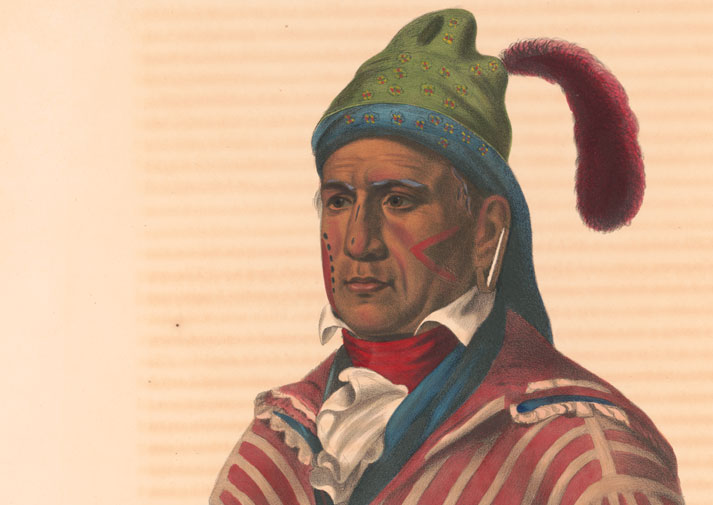 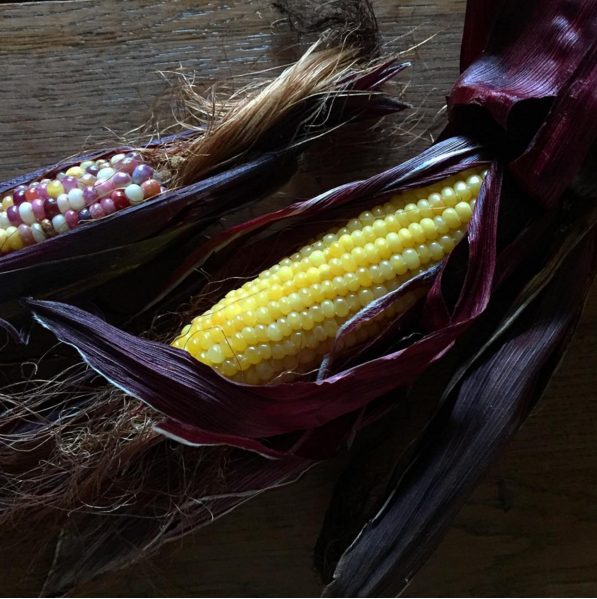 A Ghost In The Freezer

Food is the product of love and labor, usually in equal parts. When left behind, it reminds us that our loved ones were…