Presented October 29, by Ronni Lundy, for the Southern Foodways Alliance

For most of us who have earned our place at the table by juggling pen with knife and fork, the farm has been and remains a much beloved cousin, but a cousin once removed. We revere it, we know what we owe it, we faithfully tell its stories. We visit it when we can.

For this year’s Craig Claiborne Lifetime Achievement Award recipient, the author of timely, telling fiction and delicious cooking compendiums, the farm is, instead, home.

In 1915, Dori Sanders’ father, then a sharecropper, saved enough to buy the South Carolina farm that his descendants, including Dori, work today. Although her father was a teacher, her mother an accomplished musician, and their house was filled with books and song, Dori said she never dreamed she’d become a writer. Now, in addition to her two acclaimed novels and a classic southern cookbook, the World Catalog of libraries tells us that Dori has published some 30 works in 7 languages. Yet, in the summer season, you can usually find Dori selling peaches and autographing her books at the family’s stand, still on that land in Filbert, South Carolina.

Her father’s legacy, that land, is the very blood of Dori Sanders’ life and her work. The soil is her soul, the sound of the rain that nurtures it can be heard in her voice.

Her voice. Reviewers have compared it to Alice Walker and Zora Neale Hurston. Donna Pierce described it as “sounding like an angel.” The Kirkus Review said it “resonates as powerfully as an old hymn.” As a writer, as a human being, Dori Sanders’ voice has sung the gospel of the Southern earth, and she has shared with remarkable generosity the delicious, peach-juice oozing fruit of her labors there.

Hers is no hell-fire and brimstone gospel, but one of compassion and the characteristic hospitality and openness of the Southern table. In 1990 Dori published Clover, a remarkable book that told the loving story of a young black South Carolina girl coming to terms with her white stepmother, and vice versa. For most of us who grew up in the contemporary South, with our hearts as well as our eyes and ears open, this story — of the first tentative, but ultimately deep connection between individuals of both races — strikes a profound chord. Dori’s second novel, Her Own Place, honestly chronicles the struggles of African-American women during World War II.

Dori has said that she writes about what she knows. When it comes to Southern food, she knows a whole lot. Her cookbook, Dori Sanders Country Cooking, is not simply a compendium of delicious recipes, from to-die-for buttermilk pralines to frog’s legs to sweet potatoes with pickle and onions, it is also an anthology of stories and imagery that showcase her unique perspectives on Southern life. From the rituals of box suppers to the exigencies of cooking to survive a hurricane or a visit from Northerners, Dori is an impeccable and entertaining guide.

She is also a no-nonsense craftswoman in the kitchen. When her editors in New York called to ask her how big the eggs were in a recipe she had written, she told them it depended on the size of the chickens. When they asked how long she cooked another dish, Dori sighed, I expect, before she answered, “Til it’s done.”

“Til it’s done.” Fortunately for us, Dori’s legacy will never be done. She told an interviewer once that she began writing down her stories for the descendants in her family, so that even if the farm passed on to others, they would know the richness of their roots. Timeless books have a way of changing things. Lucky for us, we have all, now, become Dori’s so-blessed descendants.

In this year when we at the Southern Foodways Alliance devote our symposium to exploring the deep roots and far ranging branches of our cultivated earth, it is not simply an utter delight, but an utterly appropriate delight, to present the 2011 Craig Claiborne Lifetime Achievement Award to Dori Sanders. In recognition of her life’s work we present this vibrant and beautiful—just like you, Dori —portrait commissioned by the SFA and created by the equally vibrant and beautiful Oxford artist, Blair Hobbs.

Dori Sanders is a farmer, novelist, cookbook author, and a founding member of the Southern Foodways Alliance. She was raised on her family’s farm in Filbert, South Carolina, and returned there in middle age after living in Maryland for many years. She published her first novel, Clover, in 1990. Her cookbook, Dori Sanders’ Country Cooking: Recipes and Stories from the Family Farm Stand, followed in 1995. Sanders and her family still operate a roadside farm stand during the growing season, specializing in peaches. Read More 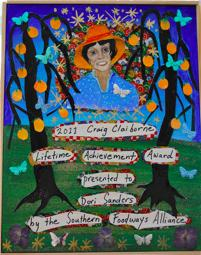