Frank and Pardis Stitt presented the 2012 Lifetime Achievement Award, a painting by Oxford artist Blair Hobbs, to their longtime friends Ben and Karen Barker of Durham, North Carolina. Citing a desire to spend more time with their children and grandchildren, the Barkers shuttered their legendary Magnolia Grill in May after twenty-five years in business. More than thirty years after meeting on the first day of culinary school, Ben said that Karen is still his muse. “No matter how good the dinner was, you really came to Magnolia Grill for a piece of Karen’s pie.”

Karen grew up in Brooklyn, New York, the daughter of academics, and she developed a passion for baking as a young girl. She studied history as an undergraduate, but decided to forgo academia for culinary school, inspired by visionary women chefs such as Alice Waters. Ben Barker was raised in Chapel Hill, North Carolina, where his father was a professor at the University of North Carolina’s Dental School.

Ben and Karen met on the first day of culinary school at the Culinary Institute of America in Hyde Park, New York, in the late 1970s. The subject matter of the class—restaurant sanitation—was a natural catalyst for romance. The Barkers have been cooking together ever since.

In a 2011 SFA oral history, Ben stressed his family’s agricultural heritage in the North Carolina Piedmont. When he was growing up, both his maternal and paternal grandparents lived in Alamance County, some thirty miles west of Chapel Hill. They had moved from farms into the city of Burlington to work in the textile mills during the Depression. Ben said that even though mill work allowed his grandparents to enter the urban middle class, “they still maintained that relationship and link to the land…Our grandfather would raise root vegetables, potatoes, white turnips and their greens, and tomatoes and squash and beans, and it was part of my great, fond memory of walking down there with him barefooted in those sandy rows and watching him make his selections for that moment’s meal.” Throughout his career, his cooking style has been grounded in classic North Carolina Piedmont ingredients—with a heavy emphasis on the local and the seasonal—interpreted through European-inflected culinary techniques.

The Barkers cooked at La Residence in Chapel Hill from early 1982 through the summer of 1984. From there they moved to the Fearrington House in Pittsboro from August 1984 until August 1986. Three months later, they opened Magnolia Grill. The restaurant was housed in a cinderblock building on Ninth Street in Old West Durham, a former mill neighborhood nestled between the East and West campuses of Duke University. The restaurant celebrated its twenty-fifth anniversary in November of 2011. On May 1, 2012, the Barkers announced that they would close the restaurant at the end of that month, citing a desire to spend more time with their children and grandchildren. Reservations for Magnolia’s last month of operation were booked within hours. Each afternoon, a line stretched down the block, with diners from as far away as New Jersey and New Orleans eager to grab a seat at the bar and savor one last Magnolia meal. Down to its last night of operation, both the food and the service were as good as they had ever been.

Magnolia Grill’s twenty-five-and-a-half year tenure was a remarkable feat of longevity, even more so given that the same chefs were at its helm since day one. Together, the Barkers oversaw the dinner service five nights per week, with Ben in charge of all meal service and Karen as pastry chef.

Customers and restaurant critics alike delighted in the contrast between Magnolia’s humble exterior and the food that the Barkers served inside. For many diners, it felt as if they had stumbled upon a hole-in-the-wall that offered first-class food by happenstance. In 2004, the late Johnny Apple took a road trip through North Carolina and wrote in the New York Times, “Neither the restaurant’s battleship-gray façade nor its understated interior…gives much of a clue to the sophistication of its food.”

The Barkers knew this in 1986 when they purchased the building from Lex Alexander, whose Wellspring Grocery had grown out of the relatively small space.  Magnolia always had an open kitchen, which was unusual for the time and place when the restaurant opened. Ben and Karen directed their employees night after night, making sure that each dish met their high standards. The nightly performance captivated diners and barflies for more than twenty-five years.

The Triangle restaurant scene is filled with chefs who honed their skills under the Barkers’ tutelage. In 2010, a Raleigh News and Observer story reported that “twenty-eight chefs who have worked in their kitchen have gone on to own their own restaurants or become executive chefs.” Imagine a family tree with forks and spatulas for branches, charting the paths of the Barkers’ culinary offspring, from Robert Stehling of Charleston’s Hominy Grill to Phoebe Lawless of Durham’s Scratch Bakery.

Ben and Karen both won James Beard awards, his for best chef in the Southeast and hers for best pastry chef in the nation. Magnolia Grill appeared on multiple lists of the top fifty restaurants in the country, and its reputation never faltered. In its last full year of operation, The Raleigh News and Observer’s Greg Cox named Magnolia Grill as the Triangle’s “Best Restaurant of 2011.” Cox described the restaurant as “the granddaddy of all old-timers in terms of its influence on the local dining scene.” “When it comes to the food,” wrote Cox, “Magnolia stands alone.”

Indeed it did. We wish the Barkers the best of luck in whatever they choose to do next, and we are proud to present them with the SFA’s 2012 Craig Claiborne Lifetime Achievement Award. 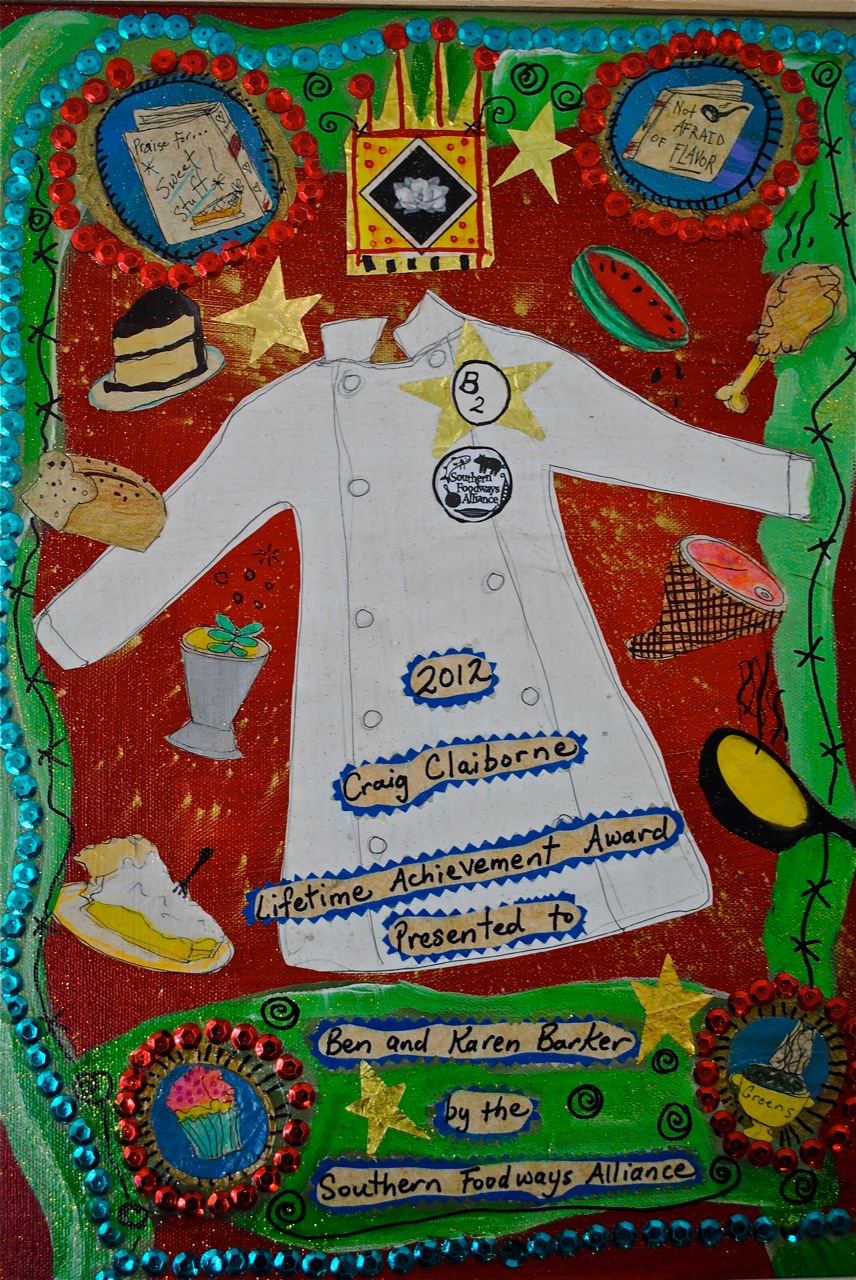