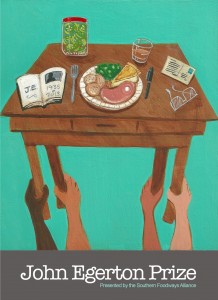 For his work in chronicling and championing the cause of civil rights in America, and for his contribution to our understanding of the power of the common table, the John Egerton Prize recognizes artists, writers, scholars, and others–including artisans and farmers and cooks–whose work, in the American South, addresses issues of race, class, gender, and social and environmental justice, through the lens of food.

The prize identifies people whose work would benefit from greater freedom, support, and exposure. Complete nomination form by Tuesday, March 3 at Noon central time. No self-nominations are accepted. Awards are announced each fall. If you have any questions, please contact Afton Thomas at afton@southernfoodways.org Candidates should:

1) live or work in the American South;
2) exhibit exceptional creativity;
3) apply the rubric of food to their work;
4) have the potential to make a genuine difference in one or more fields; and
5) stand to truly benefit from a $5,000 investment in their work.