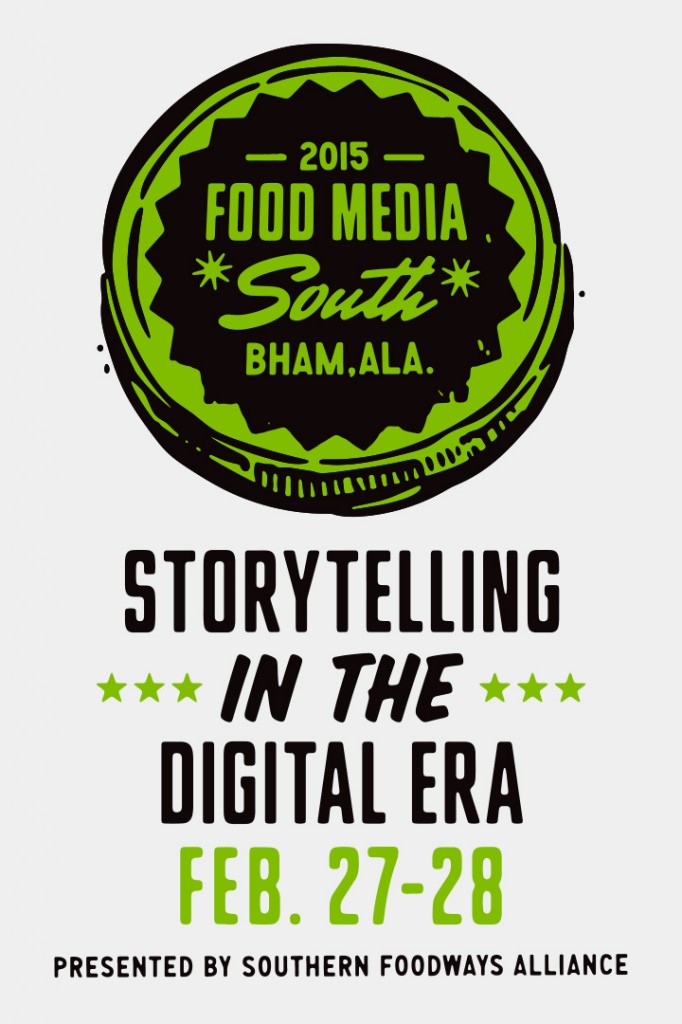 The SFA, an institute of the Center for the Study of Southern Culture at the University of Mississippi, has documented, studied, and celebrated the diverse food cultures of the changing American South since 1999. Over the last five years, the SFA has emerged as a leading content creator, the publisher of a quarterly journal, a book series, a mobile app, a biweekly podcast, and dozens of films. With Food Media South, the SFA invests in the future of food-focused content creation and foodways storytelling.

The rise of digital media has created new publication opportunities. And new challenges. Web and mobile platforms debut each week. And old platforms, like journals and zines, are dynamic again. Podcasts, once the sleepy stepchild of radio, are celebrated as the most dynamic audio distribution medium. The field of food journalism is exploding. SFA aims to help you find your footing.

If you blog about food and want to thread more narrative into your work, this conference is for you. If you produce a podcast and want to build your personal brand, this one-and-one-half-day intensive is what you need. If you edit a digital magazine and want to move from short reportage to long form journalism, head this way. If you write short newspaper blurbs and want to graduate to discursive magazine articles, you’re in the right place.

The day will begin with concurrent sessions before branching into afternoon tracks. Assignments to those tracks will be made in January.

Birmingham, Alabama, the media hub where fifty founders of the SFA first gathered in 1999 to forge the organization, will serve as the home of Food Media South. Funding from the Greater Birmingham Convention and Visitors Bureau and the Alabama Tourism Department underwrites the event.

Rosewood Hall, in walkable downtown Homewood, will be our headquarters for the weekend. A Friday night cocktail party, with bites from chef Frank Stitt of Highlands Bar and Grill in Birmingham, will kick off the symposium. On Saturday, participants will wake to breakfast from Little Donkey and enjoy a meat-and-three lunch showcase from Eagles Soul Food and Johnny’s. A Saturday night dinner—One Pig, Two Pies, One Pint—staged at Good People Brewing, alongside Railroad Park, will close the weekend.

In 2010, Shaun Chavis and Jason Horn staged the first Food Blog South, a groundbreaking food media event in Birmingham, Alabama. For four subsequent years, they catalyzed important conversations about media ethics, technology potential, and creative enterprise. The Southern Foodways Alliance now serves as the host of a re-branded the event as Food Media South. SFA thanks Shaun and Jason for their leadership.

SFA partners with underwriters who respect the autonomy of working journalists and encourage you to explore the city and state that Food Media South calls home:

Jennifer V. Cole of Southern Living has compiled a list of Birmingham dining options for FMS attendees. You can view it here. (Napkin not included.)

Tickets for Food Media South cost just $150, inclusive of all scheduled presentations and meals. Click here to access the event registration page, or copy and paste this link into your browser’s address bar: http://2015foodmediasouth.brownpapertickets.com. Please check your calendar before registering, as refunds for this event are not available and tickets are non-transferable.

Rooms are available at the nearby Embassy Suites. A limited block of hotel rooms reserved for Food Media South at Aloft Hotels in Homewood. (Last time we checked, those rooms were sold out.) The hotel is walking distance from Rosewood Hall, where Food Media South will convene. To reserve your room at the special conference rate of $139/night, call 877.822.1111 and request a room in the Food Blog South block. (Note that the block name is slightly different from the conference name).

A full schedule of events may be downloaded here.

Bill Addison of Atlanta is the national restaurant critic for Eater. He travels the United States and Canada in search of America’s essential restaurants.

Tina Antolini is the host and producer of the SFA’s Gravy podcast. Previously she was a reporter and producer for State of the Re:Union on National Public Radio.

Jennifer V. Cole is the deputy editor for Southern Living magazine. Her list of 100 Best Restaurants in the South is both inspiring and envy-inducing.

Tamie Cook is a chef, food stylist, video production consultant, writer, recipe developer, and caterer. Before launching her own business, she was Alton Brown’s culinary director for eleven years.

Erika Council is the writer and photographer of the blog Southern Soufflé. She credits her love of food to her grandmother Mildred Council of Chapel Hill, North Carolina, better known as Mama Dip.

Katie Culbert is the founder, along with her husband, Denny Culbert, of Runaway Dish, a quarterly magazine and dinner series based in Lafayette, Louisiana.

John T. Edge is the director of the Southern Foodways Alliance. He is at work on The Potlikker Papers, a modern history of Southern Food.

Allison Glock is a senior staff writer for ESPN and a contributing editor for Garden & Gun. Previously published in The New Yorker and The New York Times Magazine, she is the author of the memoir, Beauty Before Comfort.

Cynthia Graubart is the author of six books, including the James Beard Award winning Mastering the Art of Southern Cooking.  She produced Her new book, Southern Vegetables, debuts in March 2015.

Roscoe Hall II is a Birmingham-based artist and chef whose grandfather, John “Big Daddy” Bishop, founded Dreamland Barbecue. Hall holds an MFA from the Savannah College of Art and Design and maintains Punk as Food, a playful food-styling parody site.

Cynthia Joyce, a native of Charlotte, North Carolina, is an assistant professor of journalism and
new media. Her career has included editorial work at MSNBC, Salon, and NOLA.com. She is the
editor of an anthology of bloggers’ responses to Hurricane Katrina, which is forthcoming from
University of New Orleans Press.

Dorothy Kalins was the founding editor of Saveur magazine in 1994. Following a tenure as the executive editor of Newsweek, she now works as a magazine consultant and a producer of cookbooks. She also serves as chair of the James Beard Journalism Awards committee

John Kessler is the lead restaurant critic for the Atlanta Journal-Constitution. He is as prolific a Tweeter as he is an eater.

Andrew Thomas Lee is an Atlanta-based photographer who published widely and well. He collaborates on Brother, a food-and-agriculture ’zine.

Sara Camp Milam, a former associate editor at the Oxford American, is the SFA’s editor and content manager. The SFA’s Gravy quarterly is her baby.

Angie Mosier is a writer, photographer, cook, and food stylist. She has collaborated on cookbooks with a variety of chefs, including John Currence, Kevin Gillespie, and Eric Ripert.

Jed Portman is the assistant editor for Garden & Gun magazine. He contributes to the magazine’s print edition as well as its website, often bringing his interests in canning, foraging, and Appalachian foodways to the Daily Shot blog.

Chuck Reece is a co-founder and the editor of The Bitter Southerner. His career in writing and editing includes a three-year stint as the press secretary for Governor Zell Miller of Georgia.

Libby Romano is the director of digital strategy for BIG communications in Birmingham, AL.

Ashley Zink is an account director for the food-focused PR firm Polished Pig. Before joining Polished Pig, she was the director of communications for the Charleston Wine + Food Festival.